Two young fish are swimming along, and they happen to meet an older fish swimming the other way.

The older fish nods at them and says, “Morning, boys, how’s the water?”

The two young fish swim on for a bit, and then eventually one of them looks over at the other and goes, “What the hell is water?”

I told the above fish story as I opened my Strategic Investment Conference last week.

Most investors have no idea what water we are swimming in. They swim in a pool of consensus narratives. And that’s all well and good until the water changes.

The narrative now says that central banks and governments “have our backs.”They will do “whatever it takes” to make everything go on as usual.

Call it kicking the can down the road or whatever metaphor you like, but most investors extrapolate the recent past into the far future.

And that’s usually the right move. The cautious optimist usually wins, which means that the one most important thing to know is:

What could change the narrative?  That was my conference’s theme this year.

Most thinking investors sense a shift in the zeitgeist. We understand things are changing, but the question remains, “Change to what?” We know that whatever happens, it won’t be rainbows and unicorns.

Here I’ll give you a quick rundown of takeaways from the conference that got me thinking deeply.

Let’s begin with David Rosenberg of Gluskin Sheff who made a strong case for recession and bear market.

Rosie focused on the Fed overshooting the neutral rate. They are tightening as we go into recession by means of balance-sheet reduction and interest-rate increases. (Something I’ve also been ranting about.)

This comes with staggering implications.

Corporations have used record profits to borrow cheap debt and buy back their own shares. This increases the P/E ratio and creates the image of strength and growth even when neither is happening. 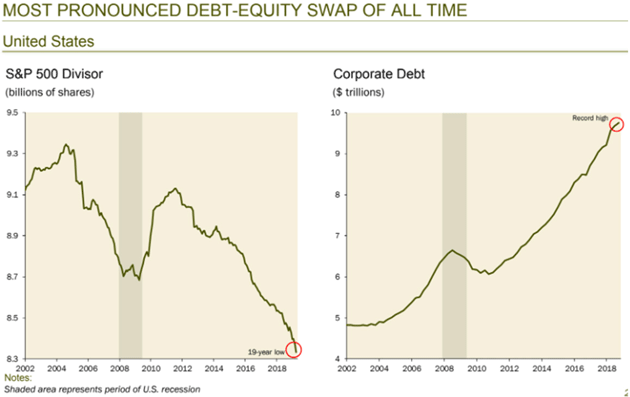 It is, as Dr. Woody Brock told us, a bastardized form (his words) of capitalism that Adam Smith would not recognize.

Mark Yusko: The US Dollar Is Poised to Go Higher

Morgan Creek’s Marko Yusko, along with many other speakers, pointed out how the US dollar could go higher. That’s not necessarily for good reasons or not for ones that we would like.

It is the result of being the world’s reserve currency. Again, a common theme was that the dollar’s reserve status is by default. There is no other realistic option. It’s the cleanest dirty shirt in the laundry.

He presented two theorems. First, federal debt acceleration leads to lower, not higher interest rates. This is because the stimulus effect ends quickly, but the debt burden leads to weaker business conditions that reduce loan demand.

These are not intuitive to most people, so Lacy walked us through the numbers. He showed empirical evidence, comparing government debt to interest rates in the US, UK, eurozone and Japan since 2007.

All the graphs looked almost identical.

If true, these theorems are ominous. They show it is almost impossible for higher savings to both absorb the debt load and sustain consumer spending and business investment.

The only solution is prolonged austerity.

The slightly good news is that in this scenario the US will likely stay the world’s strongest economy. That’s because it has the best combination of debt productivity and demographics. Again, the cleanest dirty shirt in the laundry.

They Left Me Speechless

I genuinely try not to be surprised on stage, as I do a lot of prep work with each speaker. They still left me reeling.

I moderated a panel with renowned demographer and historian Neil Howe and George Friedman, a best-selling author and geopolitics expert, on the political outlook for 2020 and beyond.

I know both of their underlying cyclical arguments, so I expected some fireworks. I didn’t realize they would both describe (for different reasons) the same kind of social tension in our near future.

I just sat there stunned for a second. I literally was speechless, and I guess it showed on my face as the audience laughed.

I can guarantee you that I’m going to review Neil Howe’s slide deck and George’s speech more than a few times to assimilate it into my outlook.

I don’t want you to think the conference was more bearish than it was. There were actually numerous positive investment themes and opportunities.

At the end of one panel, which did not mention cryptocurrencies, the implications of what they said hit me so hard that it almost persuaded me to buy bitcoin.  That was just one of a dozen portfolio-changing takeaways that I gleaned.

You will see the impact of this Strategic Investment Conference and more takeaways in my coming articles.