The hunt for advanced materials that will catapult battery technology to another level started decades ago. The search has been furious and diligent as researchers and scientists try to give the $90+ billion market exactly what it wants. And the market is set to reach this $92.2 billion as soon as 2024—up from $37.4 billion in 2018.

The lucrative prospects for the lithium ion market has enticed what had been furious and diligent progress and transformed it into something that now has reached a fever pitch—everyone wants in on the ground floor of the market that has nowhere to go but up.

The deliciousness of the lithium battery market is demonstrated by Tesla’s push to constantly improve its current battery tech, the latest development of which prompted Tesla to quietly acquire Canadian Hibar Systems, a battery manufacturing and engineering company. Hibar has now gone dark and deep-sixed its website. We don’t know what Tesla and Hibar have cooking, but you can bet it’s big. All battery tech is precious, and developers are keeping their battery babies close to their vest, with everyone holding onto hope that it will be the next lucky soul to discover the next lithium battery upend-er.

Up until now, this dedication to upend the battery market has occasionally and intermittently inspired some crazy techno-wizardry, producing gadgets with a grandiose and impossibly futuristic slant from breathable nanochain structures to bendable batteries that mimic the human spine.

And now … researchers at the University of Illinois at Chicago have earned their stripes in the field after unveiling the world’s first fully rechargeable lithium-carbon dioxide batteries that are seven times more efficient that conventional Li-ion types—fully rechargeable being the operative phrase here. 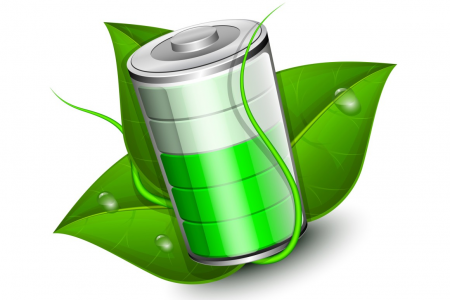 The big news: the novel batteries can be recharged up to 500 times.

For many years, scientists have salivated at the prospects of finding a material that could significantly extend the life of Li-ion batteries and allow them to last longer between charges. Now, researchers have discovered that lithium-carbon dioxide batteries fit the bill beautifully, since they possess up to 7x higher energy density than the common Li-ion batteries.

Only last year, researchers at MIT demonstrated a prototype that lasted a grand total of 10 charge cycles. At the time it was an important breakthrough that solved one of the problems in the market. It was a game-changer, even though it didn’t provide enough efficiency.

But now that’s about to change. The newer version by the University of Illinois is an even bigger step-up in terms of the shellacking it can take in the form of charge cycles before giving up the ghost.

The technical cul de sac that the researchers have overcome revolves around a tendency of carbon buildup on the catalyst during charging.

So, how does this new wonder gadget work?

According to Amin Salehi-Khojin, associate professor of mechanical and industrial engineering at UIC’s College of Engineering and author of the paper, lithium-carbon dioxide batteries have been plagued by the accumulation of carbon, which not only blocks the active sites of the catalyst but also prevents efficient diffusion of carbon dioxide and triggers electrolyte decomposition in a charged state.

To get around this challenge, Salehi-Khojin and his colleagues used a hybrid electrolyte in conjunction with molybdenum disulfide as a cathode catalyst to help incorporate carbon in the cycling process.

In plain speak, the scientists created a single multi-component composite product rather than a hodgepodge of separate products, which helped to enhance the recycling process.

While the new batteries still cannot hold a candle to high-end Tesla batteries that can be recharged up to 5,000 times and last up to a million miles, 500 charge cycles is good enough to make them practical for many everyday uses, including in portable power packs, smartphones, UPS systems and possibly even some electric vehicles.

Regarding their carbon-scrubbing abilities, at this point it’s not yet clear just how much of the greenhouse gas will be going into each battery to justify their lofty price tag but, hey, as long as they are eating it up and not spewing it out it’s fair game.

Now, the new batteries are still a long way from commercial production, but so far, they are a good proof-of-concept energy storage device that might one day provide a means to channel all that carbon dioxide into something useful.

By Julianne Geiger for Oilprice.com