Oil been getting crushed this month and a top technician warns the decline is signaling even more trouble for energy stocks.

Crude has been on a tear for the better part of the year, jumping more than 36 percent since January and breaking above the $70 level for the first time since November 2014.

Nonetheless, a surge in U.S. oil production along with a slowdown in the emerging markets have recently sent the commodity lower, with crude now down more than 10 percent from its 52-week closing high of $74.15 in July.

According to Carter Worth, head of technical analysis at Cornerstone Macro, oil prices have now “broken trend and that’s really going to be the issue ultimately if, and as there’s more to come.” 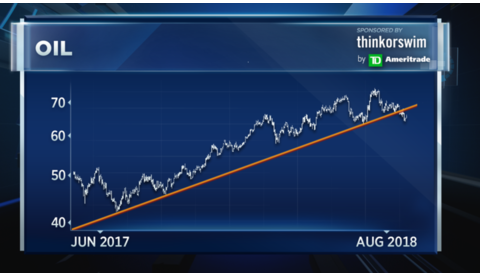 The crude crush has put pressure on the broader energy space. The XLE Energy ETF, which tracks the sector, is down more than 7 percent from its 52-week high of $78.91 and is now the worst-performing group this month.

See also  Retail is all in calls on cryptos and stocks.. you need to thank them to do their job as liquidity providers 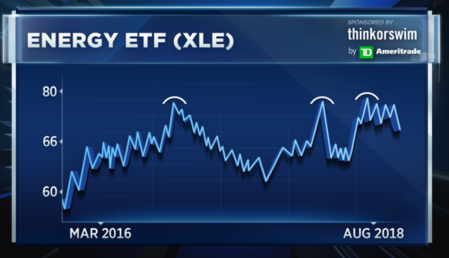 “Oil has resisted the dollar strength but is now starting to roll on energy stocks and turn under some pressure,” Worth said Friday on CNBC’s “Options Action.” 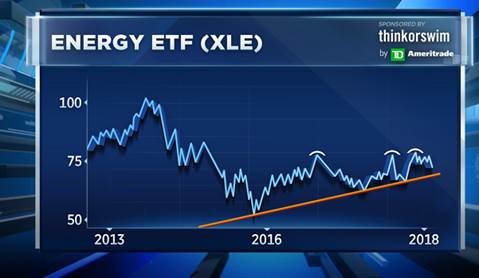 Worth illustrates that in the past two years the ETF has been unable to break above a key $80 level, showings signs of a bearish triple-top formation.

“[The XLE] failed here three times and ultimately we have the risk of going back to trend and that implies about $70.”

Who is really responsible for EEM crisis? Well, it is the Federal Reserve of course…