Deflation eats credit-dependent, mass-consumption economies alive from the inside.

While AI (artificial intelligence) garners the headlines, the next wave of disruptive technologies extend far beyond AI: as the chart of technologies rapidly being adopted shows, this wave includes new materials and processes as well as the “usual suspects” of machine learning, natural language processing, data mining and so on.

While many voices seek to assure us these technologies won’t displace human workers, the reality is cutting labor inputs is the core driver. What few pundits seem to understand (perhaps because they’ve never experienced a truly competitive market?) is that the rush to incorporate these technologies into existing enterprises is deflationary not just to prices but to profits.

Reducing labor inputs and improving productivity of capital and the remaining labor force is not going to generate profits if competitors can access the same tools and processes. The race isn’t to maximize profits, it’s to survive the inevitable deflationary spiral in prices as competitors are forced to pass along cost savings to customers to retain market share.

Pundits glorying in tech profits only consider monopolies or quasi-monopolies like Apple, Facebook and Google or monopolies / cartels enforced by government regulations and policies. Markets open to competition do not enable pricing power beyond a temporary advantage for one or two product cycles. (Please see Two Intertwined Dynamics Are Transforming the Economy: Technology and Financialization)

Everyone counting on trillions in tech profits is overlooking the inconvenient reality of the S-Curve for cheap credit, cheap energy and cheap labor–the three drivers of global expansion. Once credit dries up or becomes more expensive, once cheap energy is only a memory (or future fantasy) and once employment sags under the pressure to reduce labor inputs, the ranks of those with the earnings or credit to buy, buy, buy will be thinned.

Stagnant wages can only be supplemented with borrowed money until the costs of servicing the debt (interest) eats the borrower’s budget. At that point, lenders will have to face the unpalatable truth that any additional loan will end in default, a process that will also collapse the entire unsustainable mountain of debt the household is struggling to service.

As many others have pointed out, energy can be abundant but it only drives expansion if it’s affordable to low-wage workers. If it’s only affordable to the top 20%, every economy based on mass consumption implodes.

One of the factors in the U.S.-China trade dispute that few seem to notice is labor costs are spiraling higher in China, reducing its competitiveness at a critical juncture as global trade, demographics, energy costs and the risk of credit bubbles bursting all form a self-reinforcing confluence of negative dynamics.

China still needs the jobs while its customers (including but not limited to the U.S.) are seeking lower-cost alternatives to Made in China. Even Chinese companies are looking to establish lower-labor cost manufacturing hubs overseas.

Strip away the happy talk about technology creating jobs and we’re left with real-world enterprises desperate to lower cost inputs in any way they can: and the go-to “solution” to reducing cost inputs is reducing labor inputs by reducing wages via global wage arbitrage (a.k.a. offshoring jobs) and/or replacing human labor with software and robotics.

Sure, there will be jobs for those installing and maintaining the software and robots, but remember: enterprises don’t have profits, they only have costs, and the pressure to eliminate entire layers of managerial costs as well as production costs will only increase.

Who will be willing and able to pay a premium for any technology, product or service if cheaper alternatives are available? As debt service costs rise and wages continue to stagnate, the “solution” of borrowing more reaches an endgame of credit contraction and soaring defaults.

That leaves government-enforced monopolies as the only dependably profitable corporations, and the citizenry will soon tire of enriching tech oligarchs who bought political cover and regulatory moats. Deflation eats credit-dependent, mass-consumption economies alive from the inside.

Adapt or die boils down to strip out costs or die. 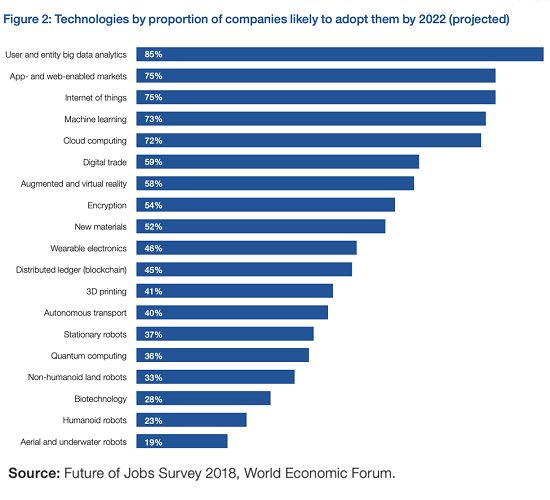