Friday, June 9 was a ruthless day for tech giants and therefore for everybody in the stock market. Yahoo writes, the so-called ‘big five’—Apple, Alphabet [Google’s mother company] Class A shares, Microsoft, Facebook and Amazon [FAAMGs]—lost more than $97.5 billion in market value between the close on Thursday and the close on Friday, according to FactSet, dragging the Nasdaq to its worst week of the year. Tech giants Netflix and Nvidia fell, as well. It might seem that it’s not a big deal or it was a minor correction, but it is a big deal. CNN explains, the top five techs today account for 13% of the market value weighting in the S&P 500, even though they are only 1% of the companies in the index. The top five techs made up about 16% of the S&P 500 in 2000. While all these stocks remain up for the rear; this is a warning of things to come. Much like the dot.com bubble, which popped in 2000, money-printing by the Federal Reserve (Fed) has created another tech bubble that will pop. The only question is when. Two weeks earlier David Stockman, Ronald Reagan’s former budget director, issued a prescient warning: get out while you can. Stockman explained that the significance of these stocks is even greater than it seems. In fact, the market cap of the S&P 500 has risen from $19.5 trillion to $21.3 trillion during the last 29 months. But just five NASDAQ stocks (‘Big 5’) consisting of Microsoft plus the FAANGs (less Netflix) account for 56% of that $1.8 trillion gain, Stockman writes. Stated differently, the combined market cap of the NASDAQ ‘Big 5’ has soared from $1.9 trillion to nearly $3 trillion since early 2015, or by 55%. That compares to just a 4.5% gain in the aggregate market cap of the other 495 S&P 500 stocks during that period. These companies, riding the biggest bubble in history, are the biggest beneficiaries of the funny money printed by the Fed. Their stocks are in an extreme bubble. When that bubble collapses, the broader bubble will collapse with it. Nobody can predict with certainty what will trigger the crash and when it will happen, but the crash is inevitable. daytoncitypaper 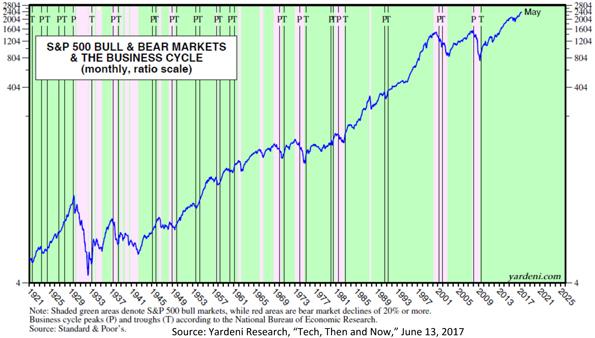 Source: seekingalpha
“Most investors fear a replay of some past portfolio haircut – specifically the financial crisis of 2008 or the tech stock bubble of the late 1990s, which memorably popped in 2000. In just 31 months, the tech-heavy NASDAQ index fell by 78%, from a peak of 5048 on March 10, 2000 to just 1114 on October 9, 2002.So that makes the tech stock crash of 2000-02 the worst sector-specific massacre of our lifetimes, right? Nope. According to Professor Jeremy Siegel’s “Stocks for the Long Run” (Fifth Edition, 2014, pages 43-44), the financial sector of the S&P 500 fell 84% from its peak in May 2007 to its trough in March 2009. That’s slightly worse than the 82% loss in the S&P 500 tech sector from its peak in 2000 to its trough in 2002. What’s even more devastating, the decline in financial stocks in 2007-09 wiped out the previous 17 years of gains –since 1990 – while the tech crash of 2000-02 only wiped out five years of previous gains. Peak to trough, Bank of America lost 94.5 percent of the market value of its equity. Citibank lost 98.3 percent, and AIG lost an astounding 99.5 percent. The equity holders of Lehman Brothers, Washington Mutual and a large number of smaller financial institutions lost everything…. Barclays fell 93 percent, BNP Paribas 79 percent, HSBC 75 percent and UBS 99 percent. The Royal Bank of Scotland, which needed a loan from the Bank of England to survive, fell 99 percent.”  Seekingalpha
“The tech sector saw a substantial bounce Monday, with the S&P 500 information technology sector closing 1.66 percent higher for its best day of the year. But tech stocks aren’t necessarily out of the woods just yet. To see why, just look at a chart of the S&P 500, and compare that to what you see on a chart of the tech sector ETF (XLK), or the Nasdaq 100 ETF (QQQ). The overall S&P broke decisively to a new high Monday. Meanwhile the QQQ is still 2.5 percent below the record high hit two Fridays ago, and the XLK is nearly 3 percent below its high. That’s why I’m not as impressed with the tech bounce as some others seem to be. Tech stocks are still just bouncing around within a range. The sector isn’t seeing the same strength as the broader market, and if we see the high-performance group start to roll over, we’re going to have a problem. The future is looking brighter Monday. But if the XLK and QQQ fail to recapture their momentum, it’s going to be tough for the broad market to keep rallying.”  Cnbc
Bottom line is that technology stocks still look attractive for the long term despite rich valuations and a recent drop in their share prices, according to Barron’s. The main reason is that the tech sector has enjoyed strong earnings growth for years — a trend likely to continue for the foreseeable future — “as technology burrows into nearly every aspect of the economy,” according to the front-page story. As a result, tech is an especially attractive sector in a slow-growth economy. Finally, many tech stocks actually are cheap, Barron’s argues in its June 19 edition.

See also  This is what bond and DXY are reacting to, not Fed. Worrying slowing of 'daily' World GDP in 2H ... Stock markets are just waking up!
See also  Stock Market Cut in Half Soon – Charles Nenner
630 views