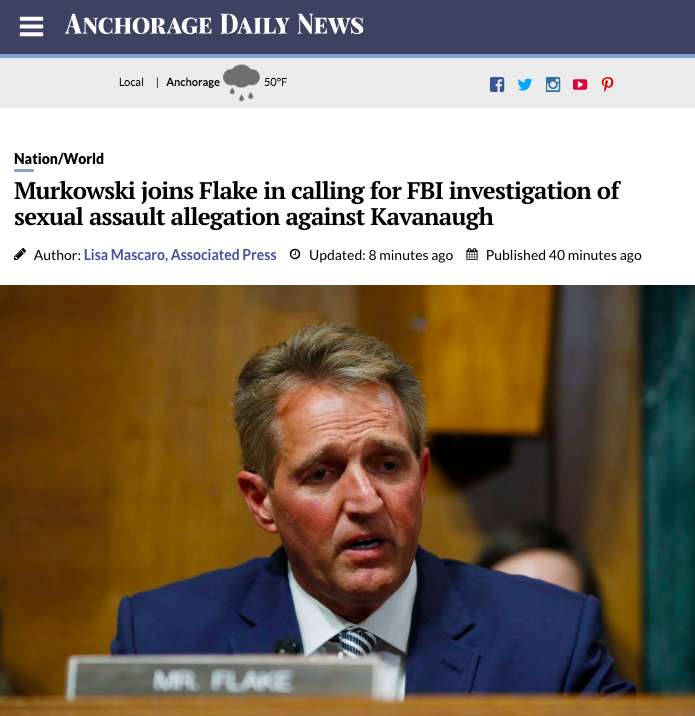 Here’s the latest on the Kavanaugh never ending saga:

Statement from President @realDonaldTrump:
“I’ve ordered the FBI to conduct a supplemental investigation to update Judge Kavanaugh’s file. As the Senate has requested, this update must be limited in scope and completed in less than one week.”

Even though the committee has officially passed the vote to the Senate, a vote on Friday is impossible, due to Flake sabotaging the whole thing, as he has the means to kill the vote in the Senate.  Flake did not do this alone; he’s only one vote. Collins and Murkowski both joined Flake in demanding the FBI probe. They gave the Dimms EXACTLY what they wanted again: time for more ‘rape victims’ to go public. First Grassley, now this. This is not mere stupidity or cowardice. This is deliberate.

It’s taken me a while to realize it, but there will ALWAYS be just enough Republicans siding with the left to give them what they want. Obamacare is still the Law Of The Land. The Wall is not built, two years after, and it seems it never will be. The only thing of real importance left is the Supreme Court, because they are the ones that will have to defend the First and Second Amendments; and it’s happening again.

Now cometh the deluge. Bring on the hounds. Just wait for it.

So, when the FBI gets the exact same statements that the committee investigators got, then what? Then they’ll demand a polygraph test. Then they’ll demand an additional hearing. And something tells me that Ford’s lawyers will say she is unavailable to answer FBI questions for until Nov 1, because she is scared of the month of October.

Seriously, can you explain me how an FBI investigation would help with anything? The Judiciary Hearing has more authority in this case, and it appears testimony was provided on both sides, with additional witnesses, and statements had been evaluated prior to both parties testifying yesterday. How would an FBI investigation be any different or better? Do they have magic powers? They’ll use meme magic? The FBI already performed 6 thorough investigations on Kavanaugh’s life and they’ve found nothing. The seventh will be a charm, I am sure. This is a guy who had a top-secret clearance in the US government during Bush 43’s administration by the way.

Think about this. Isn’t it amazing that Dr. Ford was able to not only cause a delay in the Kavanaugh hearings, but also be invited to testify before the Judiciary Committee hearing? She did this with nothing more than a story. Yes, the story contained serious, I mean life destroying serious, charges against Kavanaugh. But when it comes down to it, that’s all she had…a story. There was no compelling evidence, whatsoever, to back up that story. Yet, she had thousands of people coming to back her up, a few who actually even knew her, but none had any first hand knowledge of the alleged event. No one who was purported to be there could recall the party itself, let alone any events that took place there. So, she was given the chance to tell this story to the Committee and the rest of the world based on virtually nothing.

It’s amazing. What’s even more amazing is that Republicans, RINOs like Flake&friends to be more precise, are playing the DEMs game. This is nothing but a delay tactic. Please explain to me like I am a 5 year old, use simple words and speak slowly, so I can understand: if Judge Kavanaugh doesn’t get nominated for SCOTUS now, as the Republicans control every branch of government (the Presidency, the House and the Senate), why would anyone vote Republican again in November? What’s the difference? What’s the point?

Christine Ford better put her money where her mouth is tomorrow morning by going to the police with her sexual assault allegations and want to press charges. Because if she doesn’t, she is leaving herself open for slander charges. So far, her witnesses are not on her side, nor can she remember anything. If any of this was true, she should have not made an anonymous accusation, but should have gone to the police.

This is not even a trial. It’s not even an investigation. And, is potentially life destroying for a man and everyone in his family – even his children. This will be forever and ongoing hell for the judge, but, if this woman does not follow through, she is lying. But, then again, 6 FBI investigations never turned any of this information up when they were looking for a shady past for the judge.

This whole extravaganza is the poster child for term limits. Looking at these dinosaurs, that should be definitely changed. Or, there must be a mandatory age limit. The swamp is right before our eyes in plain sight. And it’s  disgusting.