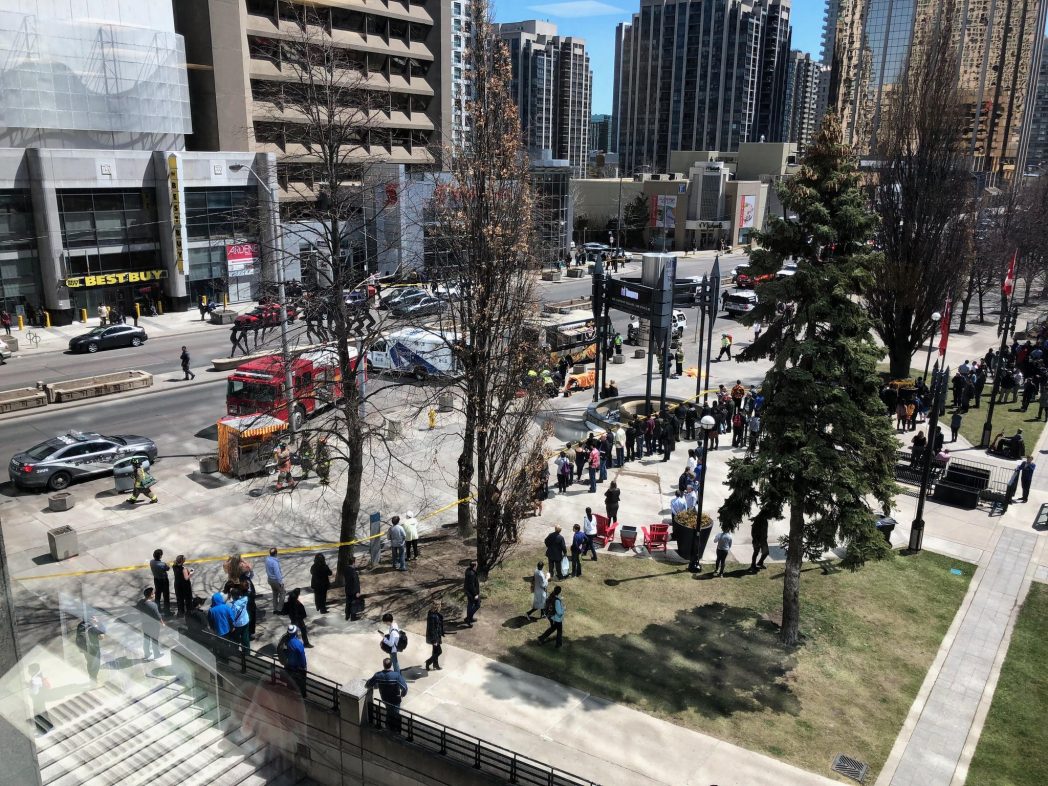 UPDATE: 9 dead in Toronto, authorities confirm it was a terrorist attack.

Five people were killed earlier on Monday in Toronto after they were intentionally hit by a white van in what seems to be a “standard” (part and parcel of living in a big city, to quote from the classics) terrorist attack. The van started mowing pedestrians at the intersection of  Yonge Street and Finch, a very busy area of Toronto, in the early afternoon. The driver was arrested at the scene after a short confrontation with the police and he’s currently in custody. Early police reports put the number of casualties at 5, together with multiple people injured, some in critical condition. According to witnesses, the white van was traveling at 45 miles per hour when the driver intentionally started crumbling up people on the sidewalk.

Eye witness telling local TV the driver was driving at least 70 or 80km an hour on the sidewalk. Witness in tears said driver was “crumbling up people” “this person was intentionally doing this”

Toronto’s  Finch station subway system was shut down in the aftermath of the attack. The driver of the (most probably rented) white van was described by witnesses as a “Middle Eastern male”.

READ  Pushing For War: Why Is The Biden Administration Pushing Ukraine To Attack Russia

Judging from the photos posted all over the social media, the van looks like a Ryder truck rental.

BREAKING: Police in Canada say van that struck 8 to 10 people in Toronto found and driver in custody.

BODIES ALL OVER YONGE ST: Multiple pedestrians struck by van in Torontot.co/APqGMQLwJc pic.twitter.com/OqIgZQigOu

Canadian news sources report that a strategic alert is to be announced by Canadian military briefed by law enforcement. Vans, knives, fed ex packages, Ryder trucks, have all been used as weapons of destruction. But of course it will be claimed guns are really at fault. Well, guns and most likely second hand cigarette smoke. And racism. Wanna bet that the media won’t report on the nationality or beliefs of that murderous nut-job willingly? The Canadian media instead will pivot to what new laws would prevent this, such as background checks to rent a truck, or maybe banning white vans.  How about a 7 day waiting period to rent a truck? Banning high-capacity white vans?

The leftist / progressive media willfully ignores the fact that murderous nut-jobs have already chosen to break laws and more laws make zero difference to them. And they won’t dare suggest Islamic terrorism,  even if they prove the driver had no other reason to rent a van. By the way, Ramadan starts May 15th. You ain’t seen nothing yet, Canada.

There are bodies all over Yonge Street right now. pic.twitter.com/dABsJlTa5z

The solution? Open the doors to more ‘refugees’ from the Middle East. Because Crusades. And Trump! Anyone who disagrees is a racist and an Islamophobe. Knowing Trudeau, this guy will receive 10 million dollars for reparations after the courts declares him a victim of Canada’s oppressive civilization.  Listening to Fox News/ Shepherd Smith- “there’s no reason to believe this is terrorism or attack”… he’s such a douche bag…

It’s funny that even if the van driver was arrested immediately, the Toronto police gave zero details on his name, age, ethnicity or anything.

This is a developing story, stay tuned.