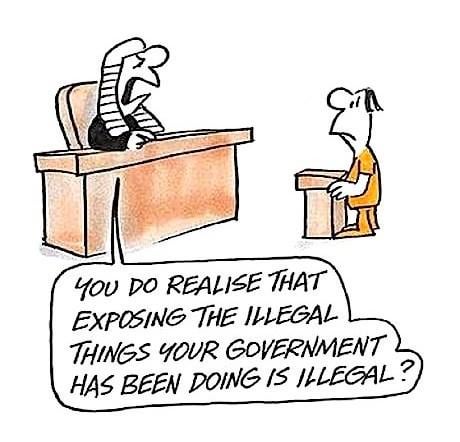 Today, wikileaks publisher Julian Assange was arrested on an extradition warrant to the US related to 18 U.S.C. § 793(e) (an espionage statute) as punishment for the publication of the “Collateral Murder” video from 2011 which highlighted US war crimes in Iraq.

Professor Vladeck explicates the terrifying nature of the precedent established by way of such a move as such;

Here’s a short thread on 18 U.S.C. § 793(e), the Espionage Act provision most likely to be used against Assange;

That’s why folks are so concerned about the press; a reporter who even receives leaked classified info may break law by not returning it.

Historically, DOJ has not pushed such an expansive view of § 793(e), whether to avoid political blowback, constitutional issues, or both. The only attempted prosecution of third parties under § 793(e) was the AIPAC case in 2005-07. That case is an equivocal precedent here:

On one hand, part of why case was dropped was because district court read statute narrowly because of analogous First Amendment concerns, but that ruling isn’t precedential, & so wouldn’t preclude future prosecution of third party under § 793(e), especially on better facts.

And once USG successfully prosecutes third party under § 793(e), it’s hard to see why it couldn’t go after mainstream media, as well…Then everything would rise and fall on scope of First Amendment defense in such cases. I’m sympathetic, but some courts might not be… That’s why an Assange prosecution under 793(e) would be such a big deal; it would throw door open to anti-press moves in future. /end

As Professor Vladeck’s explanation makes quite clear, the extradition request by the US would be the first instance of attempting to charge a media publishing organization with espionage in this way. Such a precedent opens the door to any journalist, from any country on earth, being sent to the US for trial on the basis of their reporting and directly undermines the free exchange of ideas within our modern cultural ethos.

See also  GTR: Texas Newspaper Refuses To Give Description Of Suspect In Mass Shooting Because Of ‘Stereotypes’

Beyond that, today’s arrest also sends a signal to murderous dictators (such as MBS in Saudi Arabia) that instead of bone saws, they need only use extradition warrants in order to murder journalists. A truly terrifying state of affairs on the whole.

DOJ officials expect to bring additional charges against Assange, a US official briefed on the matter said.

Julian Assange and Chelsea Manning exposed the US government killing civilians (journalists), then doing a 'double tap' and killing the first responders – and laughing about it. They unmasked the vicious deep state and deeply embarrassed them. So they're being persecuted for it.