Make no mistake: Oil and gas companies may be doing some serious cost-cutting and slimming-and-trimming to stay competitive after the shale boom binge, but when it comes to employment, it’s still one of the best industries to hit up for a job.

Jobs are booming, just as much as U.S. oil and gas production is.

Those gains have translated into more oil and gas industry jobs.

US Oil and Gas Employment

The United States Traditional Energy and Energy Efficiency Sectors in 2018 employed 6.7 million Americans in 2018, according to the US Energy and Employment Report 2019, with nearly 1.5 million directly employed by the oil and gas industry, and another 1.2 million workers employed by the power generation sector, which includes all types of power generation, including oil and gas. 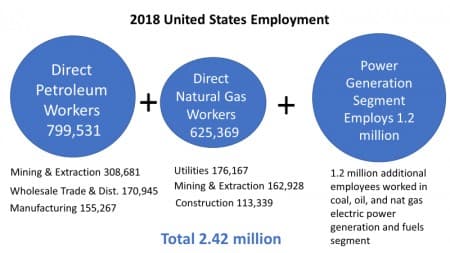 Employment in the oil and gas extraction and support services, specifically, was at its highest level in 2018 since the fall of 2014—the next most recent high.

And those jobs? None too shabby if you’re interested.

America’s energy independence push has resulted in a new high for US oil and gas workers. In fact, the energy and utility sectors have the highest median salary of any industry in the S&P 500.

Who’s Who in Energy

If you’re looking to make some cash in the oil and gas industry, you won’t have to look far. The oil industry is having a heck of a time recruiting a skilled workforce, and ExxonMobil, Phillips66, and Anadarko—all Texas based—have been more than willing to pony up the cash.

Compared to America’s overall median wage for advanced degree holders of $77,324, that’s downright generous. But what oil and gas jobs are the best?

Pay isn’t everything, but it sure is something. And if you can’t woo employees with good corporate citizenship or your climate friendliness, you had better pony up the cash. So what jobs are oil and gas companies sinking the most money into in its quest to acquire good talent?

The list of annual salaries below, developed from the Global Talent Energy Index, is based on employees with six years of experience in the oil and gas industry:

#10 Production Engineer $125,600. Production engineers mostly carry petroleum engineering degrees and are responsible for designing and selection well equipment to get it to the production stage post-drilling. They also monitor the well while it is flowing to make sure the well is efficient and still commercially viable.

#7 Mechanical Engineer $127,828. Mechanical engineers support plant equipment, and design, develop, install, and maintain equipment that is used for processing oil and gas, with a focus on safety, reliability, quality, and sustainability.

#5 Drilling Engineer $129,944. This position manages rig staff and is responsible for assessing and maintaining wells, ensuring safety measures are implementing, and is generally responsible for the financial and technical operations of drilling for oil or gas.

#3 Construction Manager $145,000. CMs are responsible for delivering construction in compliance with HSE requirements and the schedule. They work closely with the project manager in leading teams to manage and control construction projects.

#2 Drilling Supervisor $148,476. Drilling supervisors are in charge of the drill operations and make sure drilling is completed on time. Unlike most of the other top jobs in the oil and gas industry, drilling supervisors often do not need a bachelor’s degree. However, years of experience are usually required. Some employers prefer degrees in drilling technology or mechanical engineering.

#1 Project Manager $157,795. The top paying job in the oil and gas industry is the Project Manager, and it’s no wonder. The PM is tasked with ensuring that an entire project from start to finish is on track, in budget, to specifications, and within safety guidelines. The PM also ensures that communication is flowing between groups. Essentially, the PM is the glue that holds an entire operation together—and companies are willing to pay for the best. 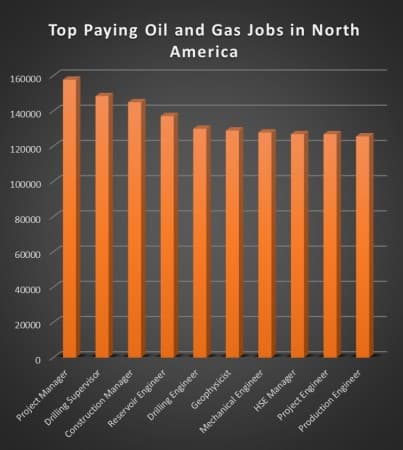 The renewables sector has something the other energy-related jobs don’t: they are appealing to the millennial generation. And as such, they tend to have an easier time with talent acquisition of doe-eyed job seekers looking to be excellent citizens.

And it’s good that they feel good about their jobs, because on average, they’re going to make less money.

We hear a lot about oil and gas here in the United States, but the US is also the world’s largest producer of nuclear power, according to the World Nuclear Association, producing more than 30% of the world’s total nuclear generation of electricity.

About 20% of the United States’ total electrical output comes from nuclear power, and despite a near 30-year slump for new builds, two new nuclear facilities are now in the works. In total, the US has 98 functioning nuclear power reactors spread across 30 states.Related: Saudi Arabia’s Final Plan For Higher Oil Prices

But the nuclear sector may find it difficult to attract new talent. The reputation the segment has, the technical nature of the work required, and the fact that the skills needed are specific to just nuclear are all working against the industry.

But there are great opportunities here, with the current nuclear workforce over the age of 55 representing a third of all workers in this sector, leaving the door open for the next generation—if they are interested.

So how do jobs in this segment measure up? Somewhere near the bottom of the pile, it would seem, but salaries are on the rise.

The United States accounted for 98% of all global oil production growth in 2018, and the EIA is expecting crude oil production in the US to reach 13.2 million barrels per day next year. Add to that the fact that the US is expected to retain its spot as the number one oil consumer of the world, US job growth for the oil and gas sector is expected to see more gains going forward.

By Julianne Geiger for OilPrice.com