Einhorn: If you look at the obvious problems from the financial crisis, we solved none of them.

And we went on a different way, and we basically, went the bailout route. And said we are going to create a whole lot of moral hazard, and we’re going to sweep as much of this stuff as in the rough under the rug as we can, and we are going to move on as quickly as we can. And so, that solved some things in some ways, but I think it is left the basic structure, more or less, as it was. And I think that it is susceptible to the same type of events or series of events sometime in the future.”

In response to the Global Financial Crisis (GFC) of 2008, central banks lowered interest rates to near-zero to boost private-sector lending, and increased liquidity to enable private-sector lenders and borrowers to refinance existing debt and generate new credit.
They also bought assets: government bonds, corporate bonds and in some cases, stocks via ETFs (exchange traded funds).
The goal here was to prop up the collateral underpinning all the debt.  If liquidity dried up, consumers and enterprises would default, handing lenders catastrophic losses, as the crisis had crushed the market value of the collateral that lenders would have to sell to recoup their losses.
And so central banks pursued heretofore unprecedented policies aimed at goosing private-sector lending and borrowing while boosting the markets for stocks, bonds and real estate—the collateral that supported all the debt that was at risk of default.
All this low-cost and easily available credit, coupled with the central banks’ public messages that they would “do whatever it takes” to restore credit mechanisms and reflate the private-sector markets for stocks, bonds and real estate, worked: credit expanded and markets recovered, and then soared to new highs.
While these policies accomplished the intended goals, boosting both new credit and asset valuations, they also generated less salutary consequences.
By lowering interest rates and bond yields to near-zero, central banks deprived institutional owners who rely on stable, high-yielding safe investment income—insurers, pension funds, individual retirement accounts, and so on—of exactly what they need: safe, stable, high-yield returns.
In this “do whatever it takes” environment, the only way to earn a high return is to buy risk assets—assets such as stocks and junk bonds that are intrinsically riskier than Treasury bonds and other low-risk investments.

The Stark Conundrum We Face

Central banks are now trapped. If they raise rates to provide low-risk, high-yield returns to institutional owners, they will stifle the “recovery” and the asset bubbles that are dependent on unlimited liquidity and super-low interest rates.
But if they keep yields low, the only way institutional investors can earn the gains they need to survive is to pile into risk assets and hope the current bubbles will loft higher.
This traps the central banks in a strategy of pushing risk assets—already at nose-bleed valuations—ever higher, as any decline would crush the value of the collateral underpinning the titanic mountain of debt the system has created in the past eight years and hand institutional owners losses rather than gains.
This conundrum has pushed the central banks into yet another policy extreme: to mask the rising systemic risk created by asset bubbles, central banks have taken to suppressing measures of volatility—measures than in previous eras would reflect the rising risks of extreme asset bubbles deflating.
In Part 2: So What Comes Next & How Can We Prepare For It?, we’ll ask: how does this resolve? Can central banks raise rates without popping the bubbles the system needs to remain solvent? Or can they keep yields near zero and keep pushing asset valuations higher for years or decades to come?
Or is this all much more likely to end in a massive financial/currency crisis? One characterized by default and liquidation of America’s high-fixed-cost, heavily indebted households and enterprises that have only stayed afloat by borrowing more money? 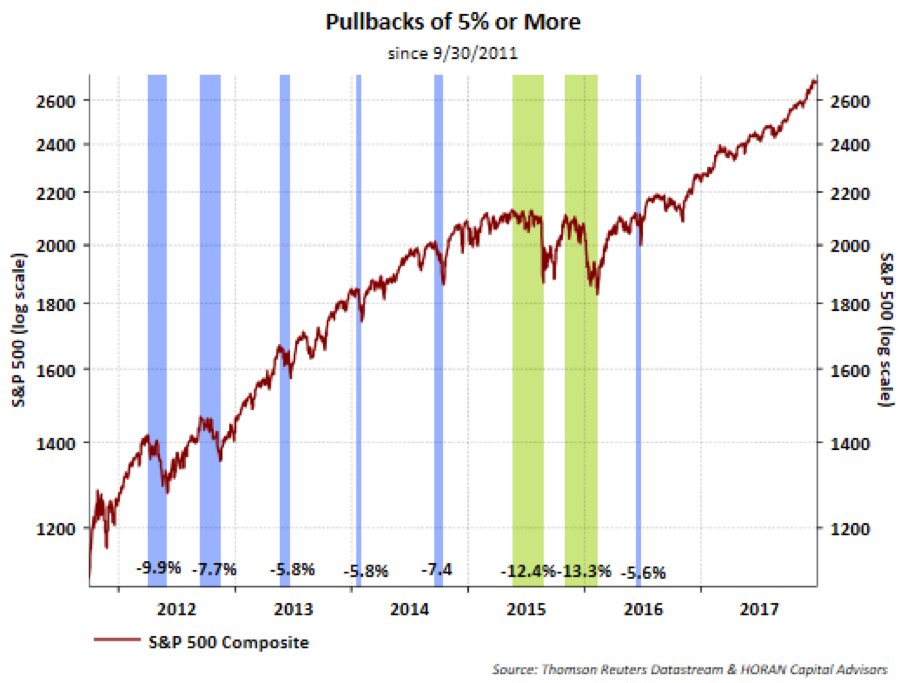