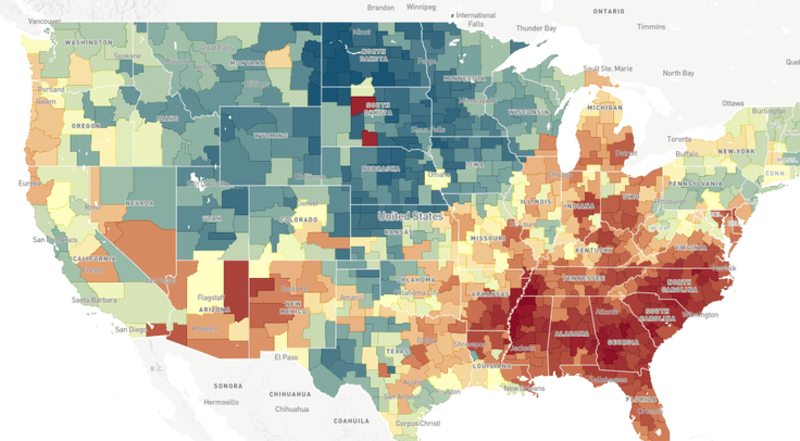 Does the neighborhood you grow up in determine how far you move up the economic ladder?

A new online data tool being made public Monday finds a strong correlation between where people are raised and their chances of achieving the American dream.

Harvard University economist Raj Chetty has been working with a team of researchers on this tool — the first of its kind because it marries U.S. Census Bureau data with data from the Internal Revenue Service. And the findings are changing how researchers think about economic mobility.

See also  When will the American people realize that their politicians don't care about them?

It used to be that people born in the 1940s or ’50s were virtually guaranteed to achieve the American dream of earning more than your parents did, Chetty says. But that’s not the case anymore.

“You see that for kids turning 30 today, who were born in the mid-1980s, only 50 percent of them go on to earn more than their parents did,” Chetty says. “It’s a coin flip as to whether you are now going to achieve the American dream.”

Chetty and his colleagues worked with the Census Bureau’s Sonya Porter and Maggie Jones to create the The Opportunity Atlas, which is available to the public starting Monday.

At first glance, it looks a lot like a Google map, where users can see the whole country, or zoom in to local neighborhoods. The difference is in the amount of data that pops up when a neighborhood is highlighted.

See also  Danielle DiMartino Booth: "This has been one of the most difficult periods in American history for small business owners. They’re not chipotle, they’re not bank of America, they cannot raise wages in order to compete with these large companies."

Researchers hope this data will help communities understand and tackle the barriers that prevent people from climbing the economic ladder. They want policymakers to use this data to offer new solutions locally.

Chetty explains that the government data they are working with is kept anonymous. The information can help pinpoint the places where lots of kids are climbing the income ladder and “the places where the outcomes don’t look as good,” he says.

Chetty found that if a person moves out of a neighborhood with worse prospects into to a neighborhood with better outlooks, that move increases lifetime earnings for low-income children by an average $200,000. Of course, moving a lot of people is impractical, so researchers are instead trying to help low-performing areas improve…