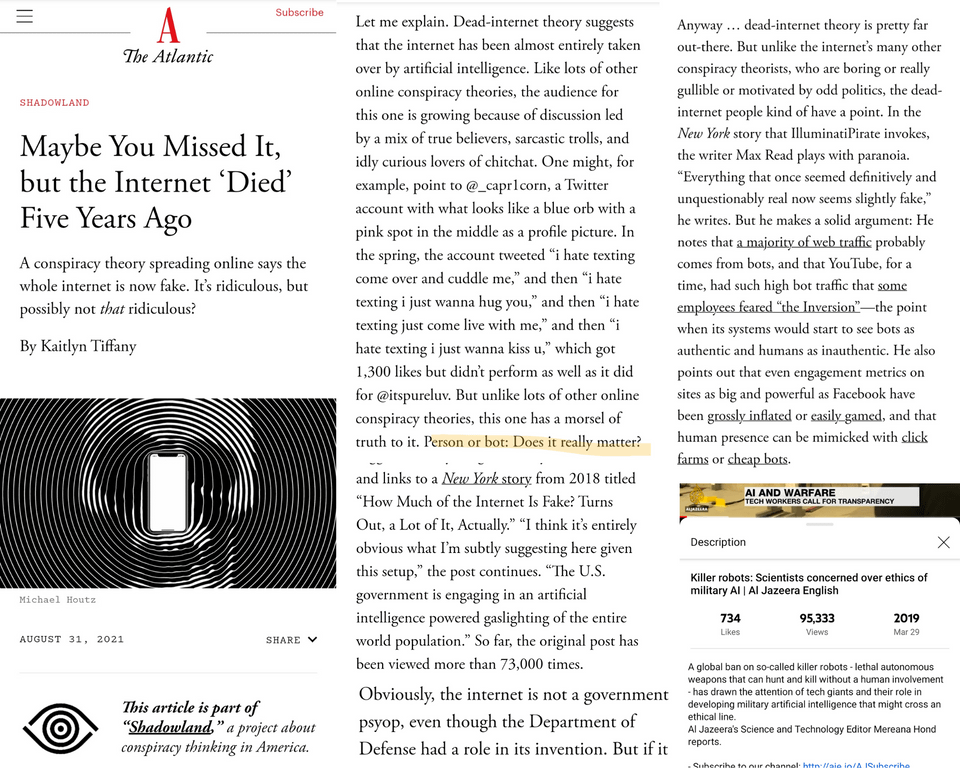 Dead-internet theory suggests that the internet has been almost entirely taken over by artificial intelligence.:

There are slight changes to the verb choice and girlish username and color scheme, but the idea is the same each time: I’m a person with a crush in the age of smartphones, and isn’t that relatable? Yes, it sure is! But some people on Twitter have wondered whether these are really, truly, just people with crushes in the age of smartphones saying something relatable. They’ve pointed at them as possible evidence validating a wild idea called “dead-internet theory.”

Let me explain. Dead-internet theory suggests that the internet has been almost entirely taken over by artificial intelligence. Like lots of other online conspiracy theories, the audience for this one is growing because of discussion led by a mix of true believers, sarcastic trolls, and idly curious lovers of chitchat. One might, for example, point to @_capr1corn, a Twitter account with what looks like a blue orb with a pink spot in the middle as a profile picture. In the spring, the account tweeted “i hate texting come over and cuddle me,” and then “i hate texting i just wanna hug you,” and then “i hate texting just come live with me,” and then “i hate texting i just wanna kiss u,” which got 1,300 likes but didn’t perform as well as it did for @itspureluv. But unlike lots of other online conspiracy theories, this one has a morsel of truth to it. Person or bot: Does it really matter?

Dead-internet theory. It’s terrifying, but I love it. I read about it on Agora Road’s Macintosh Cafe, an online forum with a pixelated-Margaritaville vibe and the self-awarded honor “Best Kept Secret of the Internet!” Right now, the background is a repeated image of palm trees, a hot-pink sunset, and some kind of liquor pouring into a rocks glass. The site is largely for discussing lo-fi hip-hop, which I don’t listen to, but it is also for discussing conspiracy theories, which I do.

In January, I stumbled across a new thread there titled “Dead Internet Theory: Most of the Internet is Fake,” shared by a user named IlluminatiPirate. Over the next few months, this would become the ur-text for those interested in the theory. The post is very long, and some of it is too confusing to bother with; the author claims to have pieced together the theory from ideas shared by anonymous users of 4chan’s paranormal section and another forum called Wizardchan, an online community premised on earning wisdom and magic through celibacy. (In an email, IlluminatiPirate, who is an operations supervisor for a logistics company in California, told me that he “truly believes” in the theory. I agreed not to identify him by name because he said he fears harassment.)