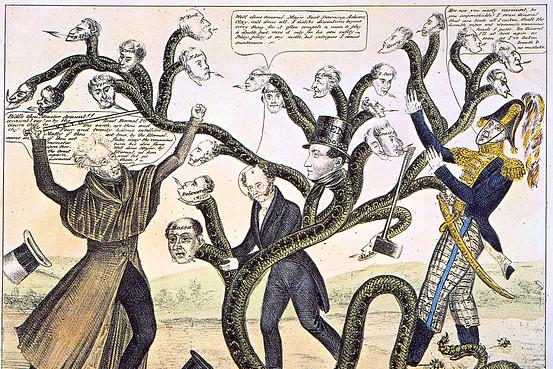 The above quote is from William Gouge, commenting on the Panic of 1819. The panic had been caused when the First Bank of the United States had first expanded the money supply dramatically by offering loans, then contracted the money supply by tightening its requirements for new loans, causing a crash.

This is a useful quote, as, in its simplicity, it states the very nature of crashes brought on by irresponsible banking practices. In every case in which this occurs, it is possible through the complicity of the government of the day.

The origin of this syndrome goes back to Mayer Rothschild, a very clever fellow who, in the late 18th century, offered financial benefits to politicians in Germany in trade for political support for whatever activities his bank might practice. Rothschild was a long-term thinker; his method involved the offering of regular emoluments to politicians without their having to provide him with anything immediately. Then, when he needed a large favour, he would call it in.

Movie buffs may see a similarity between Rothschild’s method and the deals made by Don Corleone in The Godfather. “Some day – and that day may never come – I’ll call upon you to do a service for me.”

Rothschild created boom-and-bust cycles which were highly profitable for his bank, but depended upon the support of the government when the “bust” part came along.

The net result would be a “panic,” or, in today’s terms a “depression.” Everyone involved would be harmed by the event except the politicians and the bank.

This scheme was accurately and succinctly described by G. Edward Griffin in 1994:

“It is widely believed that panics, boom-and-bust cycles, and depressions are caused by unbridled competition between banks; thus the need for government regulation. The truth is just the opposite. These disruptions in the free market are the result of government prevention of competition by the granting of monopolistic power to the central bank.”

Mayer Rothschild’s five sons followed in his footsteps and would go on to control much of the banking in Europe. The Rothschilds are perhaps best known for the Bank of England, which is still in operation today as one of the world’s most powerful banks.

So, let’s have a brief look at central banking in America.

In 1782, the Bank of North America was opened in America during the infancy of the United States. It was modelled after Rothschild’s Bank of England. It operated as a central bank and, as it was organised by Congressman Robert Morris, it was intended from the start to serve both its directors and the politicians of the day.

The bank did indeed serve the bankers and politicians – at the expense of the depositors. Although the bank lost its charter in 1783, an effort was soon afoot to create a virtually identical bank, called, “The Bank of the United States.” The proposal was backed by the Rothschilds, who intended to control it.

Having just seen, first hand, how much damage a central bank, with a fascist relationship to the government could do, a terrible (and ongoing) row took place within the Cabinet of President George Washington as to whether another potentially disastrous bank should be allowed. The main protagonist was good Secretary of State Thomas Jefferson, who said,

“The system of banking [is] a blot left in all constitutions, which, if not covered, will end in their destruction… I sincerely believe that banking institutions are more dangerous than standing armies; and that the principle of spending money to be paid by posterity…is but swindling futurity on a large scale.”

On the other side, Secretary of the Treasury Alexander Hamilton led the argument in favour of the creation of a second central bank. Incredibly, even though Congress had just seen what a disaster this could be, they approved the charter for the new bank in 1791. It opened with less than nine percent of the private funds required by its charter.

A primary object of the bank was to provide fiat currency for the government, whilst collecting deposits from the public. Immediately, the new bank began to print money and to lend it, with predictable results. By 1811, it had closed its doors, having rewarded only its directors and some politicians, whilst the depositors lost their money.

This, surely, would be the end of the failed concept of a central bank, a fascist partnership between financiers and politicians. However, in 1816, Congress granted a charter to the second “Bank of the United States.” Within three years, the bank had caused the Panic of 1819, as stated in the opening paragraph of this article and, again, as Gouge said, “the bank was saved and the people were ruined.”

In 1832, President Andrew Jackson was up for re-election and he risked his success on a campaign to stop the renewal of the charter of the Bank of the United States. Although he won both his re-election and his bid to stop the renewal of the charter, both the Rothschild family and their American counterparts continued their efforts to create a central bank that would provide both bankers and politicians with wealth whilst using depositors as cash cows.

They succeeded marvelously in 1913 with the creation of the Federal Reserve, a more sophisticated relationship between bank and State that has operated ever since. In the boom-and-bust cycles it has created, the US dollar has been devalued by over 96% and, in 1999, the repeal of the Glass Steagall Act allowed bankers to create the Mother of All Loaning Sprees, resulting directly in the collapse of the real estate bubble in 2007 and the crash of the stock market in 2008.

But the system today is far more advanced than in the eighteenth century. It is no longer necessary to fold the banks involved, or at least not immediately. In the aftermath of the 2007/2008 crashes, Government has declared that the closing of the central banks would be the worst catastrophe that could befall the country and therefore, the country must borrow heavily to re-fund them. No requirement was made of the banks to actually offer these funds on loan, let alone to bail out the debtors. The banks have instead been able to absorb the funds, continuing the massive bonuses to the very directors who caused the disaster in the first instance.

The above history is a brief, thumbnail sketch of events relative to central banking in the US since the formation of the country. It is not meant to be all-encompassing and the reader is encouraged to study the subject further. But the sketch does have a purpose.

Today, most of the First World is in the midst of an economic crisis that has been caused by debt. That debt has been the product of bankers and governments working together.

History shows us that the present situation is not an accident. It is the repetition of a very successful method by which bankers, with the complicity of governments, create boom-and-bust cycles; cycles that, whilst damaging for nearly all citizens of a country, are very profitable for those who create the cycles.

If we are to watch the evening news, there are, daily, politicians and pundits offering “solutions” – “Provide quantitative easing,” “tax the one percent,” or simply, “kick the can down the road.” Through endless debate, viewers are encouraged to believe that somehow, the government and the directors of the banks and the Chairman of the Federal Reserve will come up with a solution to the problem.

However, a brief read of the history above suggests that there will be no “solution,” as no solution is intended by those who have created the problem. The entire concept is to periodically hang the depositor out to dry. (It’s not done to be purposely unkind; it’s done because it’s so very profitable.)

If the reader has not yet been squeezed to the point that his net worth (value of assets, minus debt) is under water, he would be well advised to consider means by which his liquid assets can be removed from the banking system, a system that, if history repeats, may soon take those remaining assets, as the second half of the Great Unravelling unfolds.

Does this mean that the reader should run right down to the bank and withdraw his assets? Not necessarily. What it does mean is that it would be best to recognise that a clear pattern has existed for hundreds of years regarding boom-and-bust banking and the reader would be well-advised to ask himself some unpleasant questions. Here are a few:

The above questions should be asked periodically, as events unfold. Doing so may mean the difference between the retention or loss of assets that the reader now trusts his bank to hold for him.

Editor’s Note: A severe financial hurricane far greater than what we’ve seen is on the horizon. And most people won’t be prepared for what’s coming.

This is exactly why New York Times bestselling author Doug Casey and his team just released an urgent report showing you how to survive and thrive during an economic collapse. Click here to download the PDF now.