I literally screamed “you’re f*cked” at Sweeney and the Producer when he walks out of the interview. This is fantastic. 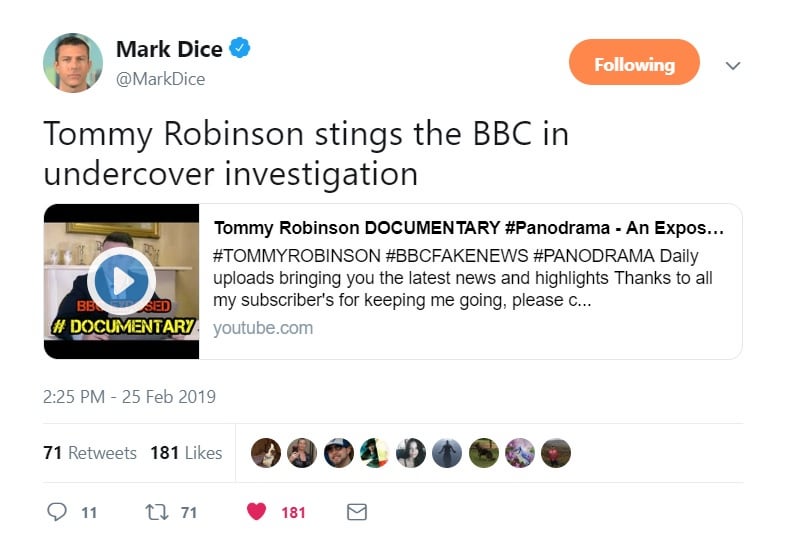 Tommy Robinson, the far-right founder of the English Defence League, has been permanently banned from Facebook and Instagram for repeatedly breaking the sites’ policies on hate speech, Facebook said.

The company said Robinson, whose real name is Stephen Yaxley-Lennon, broke rules that ban public calls for violence against people based on protected characteristics; rules that ban supporting or appearing with organised hate groups; and policies that prevent people from using the site to bully others.

The decision to ban Robinson from the social media site could threaten his ability to reach large audiences.

Robinson is already banned from Twitter and the decision to cut him off from Instagram and Facebook will leave him reliant on YouTube as the only major online platform to provide him with a presence.

In a blogpost, Facebook said: “When ideas and opinions cross the line and amount to hate speech that may create an environment of intimidation and exclusion for certain groups in society – in some cases with potentially dangerous offline implications – we take action.

“Tommy Robinson’s Facebook Page has repeatedly broken these standards, posting material that uses dehumanizing language and calls for violence targeted at Muslims. He has also behaved in ways that violate our policies around organized hate.”

The ban comes a month after Facebook issued a final written warning against Robinson, warning him that if he continued to break the company’s hate speech policies he would be removed from its platform permanently.

Following that warning, Robinson did break Facebook’s policies again, it says, through:

• Organising and participating in events with recognised hate figures or groups, such as Proud Boys and Gavin McInnes

• Public praise or support for these hate figures and groups

• Public calls for violence against people based on issues such as race, ethnicity or national origin.

Under the ban, Robinson’s official Facebook page and Instagram profile will be deleted, as well as any future presence on the site preemptively barred. It will also place Robinson in the same category as other banned personalities such as McInnes, the Proud Boys founder, and the Infowars founder, Alex Jones, meaning that others who allow him access to the site through their own pages or profiles could face disciplinary action themselves.