1)   Central Banks engaging in emergency levels of QE at a time in which their respective economies were growing.

2)   Inflation bottoming then beginning to rise.

4)   Central Banks opting to walk back their QE programs.

Which brings us to today.

In the last month, both the ECB and the BoJ have “thrown in the towel” regarding any kind of monetary tightening.

First came ECB President Mario Draghi who suggested that the EU’s economic growth rate may have “peaked.” The ECB then follow suit by stating that it will be waiting until JULY to announce how it intends to end QE in yet another bid to see how the market reacts before it makes a final decision.

European Central Bank policymakers see scope to wait until their July meeting to announce how they’ll end their bond-buying program, according to euro-area officials familiar with the matter.

Governing Council members want sufficient time to judge if the economy is overcoming its first-quarter slowdown, the officials said, asking not to be identified because the internal deliberations are confidential. That could mean the June meeting, which would have the advantage of linking the decision to updated economic forecasts, might be too soon.

Put simply, the ECB is terrified that the markets can’t handle the end of QE. So they’ll keep “moving the finish line” out farther and farther away.

READ  Why “Trouble is Brewing” for the U.S. Housing Market | Elliott Wave International

The ECB is not the only one… The BoJ pulled a similar stunt last week as well:

His comments will be closely watched ahead of the central bank’s two-day policy meeting this Thursday and Friday. In March, the BOJ said it would keep the short-term policy rate unchanged at negative 0.1 percent and the 10-year yield target around 0 percent.

What does this mean?

Central Banks are giving up any pretense of being able to end their monetary stimulus.

The ECB can’t even hit a TWICE extended deadline without having to panic and extend it a third time. Meanwhile, the BoJ has given up any pretense of having a deadline at all. Instead, it will continue to print money and buy assets until its most heavily massaged data metric (inflation) hits some arbitrary target (Japan’s inflation numbers, much like those in the US and EU are total fiction).

Put simply: Central Banks have “thrown in the towel” on any pretense of monetary hawkishness and will continue printing money to support risk assets until something breaks.

This is what the inflation/ deflation bond market ratio picked up on last month.

I’m referring to the TIP:TLT ratio. When this ratio rallies, it’s inflationary. When it falls, it’s deflationary.

As you can see the TIP:TLT ratio has now staged a CONFIRMED breakout from a 10-year deflationary channel. 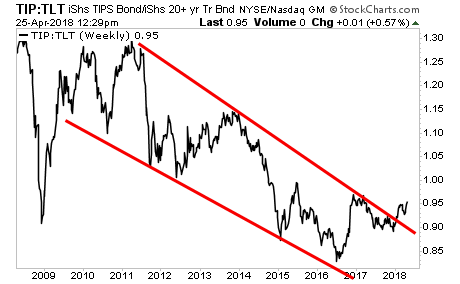 This is a truly TECTONIC shift. It is telling us that Central Banks have “thrown in the taper towel” and will be printing ad infinitum. Any pretense of fiscal or monetary responsibility is out the window.

THIS, combined with what is looking like the one of the greatest quarters for corporate results in modern history, is what will trigger new all-time highs in stocks.

This is the BLOW OFF TOP stage. And we all know what’s going to follow.

On that note, if you are growing concerned about the current Central Bank created bubble bursting…. we are putting together an Executive Summary outlining all of these issues as well as what’s coming down the pike when the Everything Bubble bursts.

It will be available exclusively to our clients. If you’d like to have a copy delivered to your inbox when it’s completed, you can join the wait-list here: