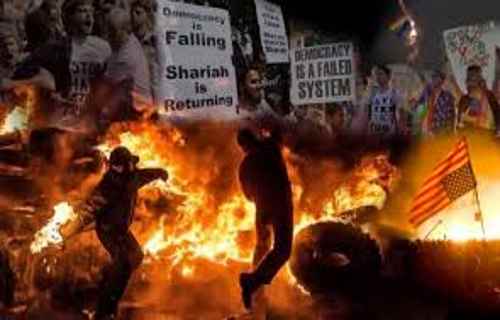 The global economy is in the worst crisis since the Great Depression of the 1930s! Despite unparalleled affluence in the Western World, personal and corporate bankruptcies are soaring. So is consumer credit. Millions are losing jobs. More millions their homes. The United States national debt is measured in trillions of dollars! Headlines of credit fraud, identity theft and corruption fill the news. Events are spinning out of control.

In my own opinion, the greatest threat the United States faces in the 21st century is not Russia, China, Iran, or Climate Change; but rather, the reckless monetary and fiscal policies of the United States.
Should the U.S. Dollar collapses, it will be the single most substantial affair in human history. No money in human account has ever had an extraordinary impact globally as the U.S. Dollar. All other currency crises have been regional in nature, and there were other currencies for people to use. A U.S. Dollar collapse would be global, and it will bring down all other fiat currencies.
History is filled with sudden currency collapses. Venezuela, Zimbabwe, Argentina, and Weimar Republic-Germany have each experienced awful currency crises since the 1900s. The cause any currency collapse is usually the lack of faith in the stability of the currency for trade and exchange.
As soon as users stop believing that a currency is useful, due to inflation and low growth, that currency is in serious trouble.

Therefore, populist conservatives should join libertarians in seeking to eliminate federal regulations, repeal the 16th Amendment, and restore a free-market monetary system. Instead of fighting to end the welfare-regulatory system that benefits economic and political elites at the expense of average Americans, populist conservatives are promoting increased economic interventionism.

For example, many populist conservatives support increased infrastructure spending and tariffs and other forms of protectionism. Like all forms of central planning, these schemes prevent goods and services from being used for the purposes most valued by consumers. This distorts the marketplace and lowers living standards — including of people whose jobs are temporally saved or created by these government interventions. Those workers would be better off in the long term finding new jobs in a free market. Anti-free-market conservatives ignore how their policies harm those they claim to care about. For example, protectionism harms farmers and others working in businesses depending on international trade.

Social conservatives object to libertarians because social conservatives wish to use government power to force people to be good. This is the worst type of statism because it seeks to control our minds and souls. Most people accept the idea that it is wrong to initiate force against those engaging in peaceful behaviors. Libertarians apply this nonaggression principle to government. Making government follow the nonaggression principle would end unjust wars, income and inflation taxes, and the destruction caused by the use of force to control what we do with our property, how we raise our children, who we associate with, and what we put into our bodies. Making governments abide by the nonaggression principle is the only way to restore a society that is free, prosperous, and moral.

The Weakness of the U.S. Dollar

The weakness of the US dollar is primarily that it is a fiat currency just like every other major global currencies. Without the discipline of the gold standard, governments print too much money for political purposes.
If the US Federal Reserve prints too much Dollars, the value of the currency will fall. Fortunately, apart from the United States, nearly all the reserve currency implement similar monetary policies like the United States.
This thinking is tragically wrong. What world empire—with half America’s problems—ever survived?

The economies of America and other nations of the West will soon collapse into full-blown bankruptcy. This will happen, although things could temporarily get a little better. Various individual states will in fact likely precede this country into bankruptcy, and thus hasten the overall collapse. Of course, nature abhors a vacuum, and a European-based world government will step in to fill America’s abdication as global leader.

Private corporate debt in the US stands at $9 trillion. Economist and co-founder of “Democracy at Work” Prof. Richard Wolff joins Rick Sanchez to discuss the dangers of such an astronomical sum to the US in the event of a deep recession.

This cannot now be far away.

The world as you know it—including your life, and I mean all aspects of it—will change beyond your wildest imagination.

So far, we have only discussed government debt. Private debt—from loans and credit cards—amounts to an additional $54,000 for every American, compared to an average savings of only $2,700.

Since 2007, $7 trillion has been lost in the U.S. stock market and $6 trillion in its housing market. These are devastating losses to people’s investments, including stocks, bonds, retirement plans, employee stock ownership and home values. Hopes and dreams crash daily!

Employment is now shrinking at the fastest rate since the Great Depression. Unemployment percentages have climbed into the double-digits in the United States. And this does not include the discouraged who have given up looking. Many other countries are much worse.

The combination of exploding debt and unemployment is hitting home! In 2009 alone, well over 1 million Americans declared bankruptcy, with more and more families also winding up jobless and in despair—facing abject poverty. This problem is worldwide. Many well-educated, middle-class people now live on unemployment, or welfare and food stamps—having never thought this could happen to them. Tent cities are springing up across America. Thousands are living in cars, and growing numbers now live in sewer systems!

Will the U.S. Dollar Collapse?

The question isn’t if the U.S. Dollar will collapse… but rather, when.
What would cause a U.S. economic collapse? The United States cannot sustain the national debt that it got at $22 trillion. As the national debt continues to increase, interest rates must go up as well.
If America’s debt is soo massive, why hasn’t it collapsed yet? The answer is simple: Major economies like Japan, China, and the European Union still invest in the US economy. Also, the U.S. accurately pays off its bonds worth trillions of dollars a year.

Events that could trigger the U.S. Dollar collapse

First of all, the Federal Reserve starts to print too much paper money to pay for politicians’ spending program (Social security, Medicare, defense spending, debt servicing) creating hyperinflation in the United States.

Next, China implements its nuclear option to dump its U.S. Treasuries holdings. China is the world’s biggest U.S. Treasury investor, owning over $1.12 trillion. By continuously purchasing U.S treasuries, it keeps borrowing costs very low for U.S. companies and government. By dumping its treasury holdings, bond yields would increase, and interest rates will rise, making it very expensive for the U.S. government and companies to borrow fund their operations, budget deficits, and savings shortfalls. To avoid this problem, the Federal Reserve has been stepping in to buy U.S. Treasury bonds. It may not be in China’s interest to dump its U.S treasuries; but it definitely has the power to do it. If China does, other US debt holding countries could also dump their U.S. debt holdings, causing panic.

Food Crisis queuing case of a food shortage you should be aware that grocery stores only have about 3 days of food in stock. People will rush and buy as much as they can so probably the food will vanish in less than a day or hours. So if anything was to disrupt the food supply chain for an extended period of time, there would be chaos in most communities. It’s very important to start preparing NOW. There are several ways to start. The choice you make should depend on the event you are preparing for. Of course the best way is to prepare for all scenarios including long periods.

What Would Happen in an Economic Collapse

Modern economies are built mostly on faith. People have confidence in the U.S. Dollar because the U.S. economy is the biggest and most significant economy in the world. Also, the U.S. economy frequently outperforms the economies of Europe and Japan. The US dollar is backed up by the output of American workers. When people do lose faith in the U.S Dollar, its value will plunge, the stock market will crash, and the U.S economy will collapse.
The U.S. National Debt is over $22 Trillion. However, the total the US total debt (debt owed by state & local governments, Household, businesses, financial institution, and the Federal Government) is a staggering $74 Trillion.
The point I’m making is that this charade cannot continue much longer. China, the European Union, India, Brazil, Russia, and other major economies are very aware of this coming crisis. It’s hard to imagine the U.S Dollar being replaced by another currency as the world’s economic standard, but it could very well happen. It is possible to wake up one morning and see the U.S dollar slide into a death spiral, stocks in a free fall, and hyperinflation.
If the U.S. Dollar and the economy collapses, the result will be the most significant stock market crash ever in the New York Stock Exchange, probably 1000–2000 points in the first day. Thus, the major stock exchange in London, Frankfurt, Tokyo, and Hong Kong will have to suspend trading. Of course, this suspension will significantly increase the panic among the general population.
Once people all over the world realize that they are a significant stock market crash happening, there will be a run on banks similar to the 1930s. In response, major financial institutions will put a freeze on most or all banking transactions, including credit card transactions. This will significantly increase panic.

Due to the bank freeze, employers will be unable to make bank transactions to pay their employees. With employers unable to access frozen bank accounts, people won’t be paid, bills won’t get paid, etc. Consequently, most businesses will be forced to either go out of business or significantly reduce their workforce; unemployment will become rampant.
With millions out of a job, the number of unemployment claims will skyrocket, bankrupting unemployment insurance programs in the major countries.
When people realize that the value of their hard earned wealth is about to evaporate, they will take drastic measures to prevent it. Those who own stores and businesses will increase their prices for goods and services drastically to survive the crisis. Panic hoarding of food, medical supplies, gasoline, heating oil, and other commodities will erupt. Runaway inflation, gas lines, and rationing will begin.
Widespread violence will explode across America. That could range from inner-city riots or gang wars. The breakdown of law and order will be the ultimate effect of rioting and looting, as they lose all their sense of right and wrong and are increasingly empowered in their sense of anger, panic, and greed. Major social upheaval will occur in America, and the fear of the unknown will set in amongst the populace.
The U.S. will be hardest hit because it has the largest economy, an enormous national debt, an economy based on credit, and a population greatly divided by race, ethnic origin, gender, color, religious beliefs, cultural differences, and financial status.