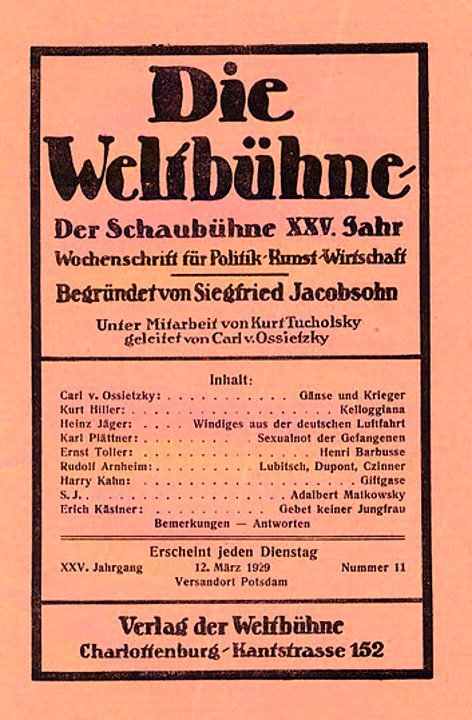 “We cannot speak to the conscience of the world when our own conscience is asleep.”

“Only one who spent the years following the First World War in Germany can fully understand how hard a battle it was that a man like Ossietzky had to fight. He knew that the tradition of his countrymen, bent on violence and war, had not lost its power. He knew how difficult, thankless and dangerous a task it was. to preach sanity and justice to his countrymen who had been hardened by a rough fate and demoralizing influence of a long war.

In their blindness they repaid him in hatred, persecution and slow destruction; to heed him and to act accordingly would have meant their salvation and would have been a true relief for the whole world.

It will be to the eternal fame of the Nobel Foundation that it bestowed its high honor to this humble martyr and that it is resolved to keep alive the memory of his work.

It is also wholesome for mankind today, since the fatal illusion against which he fought has not been removed by the outcome of the last war.

The abstention from the solution of human problems by brute force is the task today as it was then.

Albert Einstein, Out of My Later Years, 1956

“The German people slumber on in their dull, stupid sleep and encourage these fascist criminals; they give them the opportunity to carry on their destruction; and of course they do so.  Is this a sign that the Germans are brutalized in their simplest human feelings, that no chord within them cries out at the sight of such deeds, that they have sunk into a fatal consciencelessness from which they will never, never awake?”

This time, we will not be silent.

Who will be among those who remember the moral imperative to speak truth to power, and nominate Julian Assange for the Nobel Peace Prize?

In memory of Carl von Ossietzky, an investigative journalist and editor of Die Weltbühne who died in hospital in Gestapo custody after being held in various prisons and concentration camps.

He was awarded the Nobel Peace Prize in 1935. The award was controversial because von Ossietzky had been imprisoned for revealing the illegal steps the German government had been taking to rearm militarily.

There are those who believe that no matter what a country may do, it is the duty of its citizens to obey their laws without objection. And there are those who hold the primacy of natural law and private conscience and moral duty to resist evil even when it has been declared by a temporal authority to be legal.

Carl von Ossietzky was born in Hamburg, the son of Carl Ignatius von Ossietzky (1848–1891), a Protestant from Upper Silesia, and Rosalie (née Pratzka), a devout Catholic and Social Democrat. His father worked as a stenographer in the office of a lawyer and senator, but died when Carl was two years old.

During the years of the Weimar Republic (1919 – 1933), his political commentaries gained him a reputation as a fervent supporter of democracy and a pluralistic society. He was convicted in 1931 of revealing state secrets, the illegal German militarization, and served 18 months in prison. He was released in 1932.

Ossietzky continued to be a constant warning voice against militarism and Nazism when, in January 1933, Adolf Hitler was appointed Chancellor and the Nazi dictatorship began. Even then, Ossietzky was one of a very small group of public figures who continued to speak out against the now ruling Nazi Party.

On 28 February 1933, after the Reichstag fire, he was taken by the police and held without trial in ‘protective custody’ in Spandau prison. Ossietzky underestimated the speed with which the Nazis would go about ridding the country of unwanted political opponents. He was detained afterwards at the concentration camp KZ Esterwegen near Oldenburg, among other camps. 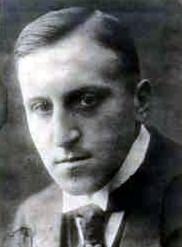 He was visited while in the camp by Swiss historian Carl Jacob Burkhardt, as a representative of the International Red Cross. Burkhardt described Ossietzky as “a deadly pale broken creature, who seemed numb, with one eye swollen over, and his teeth broken.” Ossietzky said,

“Tell my friends that I have come to the end, soon it will be over and that is good. I hear my wife tried to visit me. I only wanted peace.”

Ossietzky’s international rise to fame began in 1936 when, already suffering from serious illness that was not being treated, he was awarded the 1935 Nobel Peace Prize after an international campaign of people who hoped to achieve his release through this recognition and honor. Despite intimidation and protests directed against the Norwegian government, the Nazis had been unable to prevent this, but they now refused to release him so that he could travel to Oslo to receive the prize.

In an act of civil disobedience, after Hermann Göring, then Minister of the Interior for Prussia and head of the police, prompted him to decline the prize, Ossietzky issued a note from the hospital saying that he disagreed with the authorities who had stated that by accepting the prize he would cast himself outside the deutsche Volksgemeinschaft (community of German people).

‘After much consideration, I have made the decision to accept the Nobel Peace Prize which has fallen to me. I cannot share the view put forward to me by the representatives of the Secret State Police that in doing so I exclude myself from German society. The Nobel Peace Prize is not a sign of an internal political struggle, but of understanding between peoples. As a recipient of the prize, I will do my best to encourage this understanding and as a German I will always bear in mind Germany’s justifiable interests in Europe.’

The award divided public opinion, and was generally condemned by conservative forces. The leading conservative Norwegian newspaper Aftenposten argued in an editorial that Ossietzky was a criminal who had attacked his country “with the use of methods that violated the law long before Hitler came into power” and that “lasting peace between peoples and nations can only be achieved by respecting the existing laws”.

Ossietzky’s Nobel Prize was not allowed to be mentioned in the German press, and a government decree forbade German citizens from accepting future Nobel Prizes.

The Nobel Peace Prize money was sent to Germany where it was stolen by Ossietzky’s Nazi ‘defense attorney.’

In May 1936 he was sent to the Westend hospital in Berlin-Charlottenburg because of his tuberculosis, but under Gestapo surveillance. He was largely forgotten during the period of favorable international regard for the Third Reich, sparked in part by the massive public relations campaign surrounding the 1936 Berlin Olympics and the German ‘economic miracle.’

Ossietzky died in the Nordend hospital in Berlin-Pankow, still in police custody, on 4 May 1938, of tuberculosis and from the after-effects of the abuse he suffered in the concentration camps. In 1938 Time Magazine named Adolf Hitler as their “Man of the Year.”

In November of that year, the Reich entered a new phase of their oppression of dissent and undesirables and those to be cast outside the community of the German people, such as the mentally ill, the disabled, Gypsies, homosexuals, socialists, and trade unionists, with Kristallnacht.

In 1991, the University of Oldenburg was renamed Carl von Ossietzky Universität Oldenburg in his honor. This could be seen as a political statement, as Ossietzky’s case was being decided upon by the German courts at the time. In 1992 the Federal Court of Justice shamefully upheld his 1931 conviction. After all, as Marin Luther King once noted, what the Nazis did ‘was legal.’

I would like to join those who nominate Julian Assange for the Nobel Peace Prize for speaking truth to power and upholding the moral imperative for freedom of the press.

Please make as many copies of this as you can and distribute it.