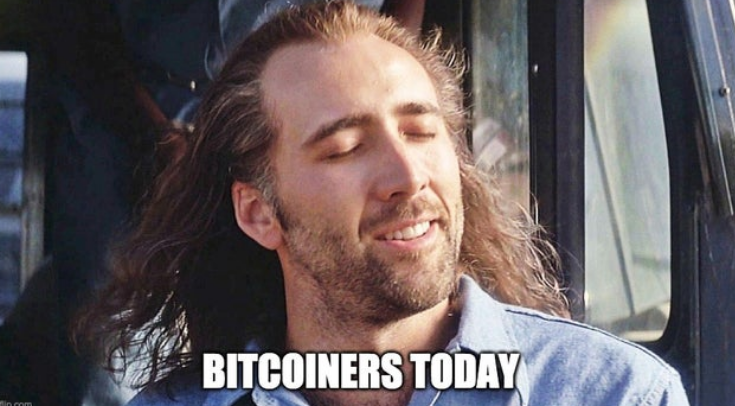 Motto: So Wall Street is telling everyone to pile in.  Come on in, the water’s great! I mean, they are a trustworthy bunch and they would not get on TV and lie to my face, right?

Let’s begin with defining terms. What is a pump and dump scheme?

Pump-and-dump is an illegal scheme to boost a stock’s price based on false, misleading, or greatly exaggerated statements.

Bitcoin reached $46,000 a unit after Elon Musk announced that Tesla “invested” $1.5 billion in BTC.  After that DogeCoin stunt last week, Musk should be in a Chinese prison, but we’re digressing.

Let me give you a bit of context.

The 2017 parabolic spike in Bitcoin was supposedly based on the crypto creating an alternate finance system where every transaction would go on the Blockchain.

The resulting crash was due to the fact that Bitcoin couldn’t ever run 0.1% of global transactions without grinding to a halt. Most institutions realized that the Blockchain is worthless. However those same institutions figured that cryptos would be easier to manipulate than stocks, so they bought in.

The new parabolic rise in Bitcoin is based on the institutions that Bitcoin was supposed to circumvent, buying cryptos.

Instead of becoming a new financial transaction network, Bitcoin is now supposedly a store of value.

However over 90% of the available Bitcoins are owned by a few whales.

By getting people to buy into the small float of available digital coins, the price rises exponentially, causing the value of the coins held by the major institutions to increase far more than your own holdings ever could.

We used to call that a pyramid scheme and it is something Wall Streeters are experts in.

Here’s something to cook your noodle: the amount of power required to process blocks would use more than the Earth could generate if Bitcoin was used for one half of one percent of global daily transactions.

The blockchain is worthless to any real business.

“But it is a distributed digital ledger.”

Why do I need that?

“You can put all your inventory on the blockchain and track it.”

I can already do that. Why would I pay millions of dollars to buy third part tokens to track my inventory and let it be public access?

Anyone who knows history should be buying tulip bulbs right now.  There is a limited supply and they grow pretty flowers!  /sarc

Bitcoin’s final settle price will be $0; once the last coin is mined, or long before, the network will simply stop working.  I would love to see Tesla take BTC for a 100k card only to see it drop 25% the next day.

Those of us here who were not in diapers in 2000 know how this will all end.  This will be the mother of all financial collapses. Bitcoin is one of the biggest pump and dump schemes I’ve ever seen, but that doesn’t mean it won’t go a hell of a lot higher before returning to its intrinsic value.

Moreover, this Bitcoin craze serves another important purpose for ZOG:  it sucks money out of the economy, i.e. it’s a mean to stave off inflation, since the Fed is pumping money out like crazy.

You should ask yourselves:  how does the FED and ZOG benefit from this scheme?  And how are they planning to screw the average BTC investor?

Because one thing this cabal is NOT known for is doing anything in the interest of anyone but elitists.

One little know thing: just like when hedge funds were caught naked and trapped into a margin call, being forced into crippling debt, the crypto exchanges carry a ‘reserve float’ of real crypto to represent their client accounts.

But is it ratioed 10:1, 5:1 who knows! Until you withdraw it back to the block chain or get a bank transfer, they own you. When an exchange has a withdrawal run, only then will everybody know how overleveraged they really are. And even then they just blame the local dog ate my homework bit, while they just blame a security incident and zero your account out.

Example: Yet another crypto exchange has fallen victim to a massive hack

I am going to be chuckling when all these companies get Corzined or gate-trapped in a regulation play.  Anyone thinks a sitting hegemonic interest is just going to sit there while their dollar is abandoned has never studied history.

PS: The King of Saudi Arabia was asked by the Soviet ambassador back in the early 80’s, ‘why insist on USD for payment for oil, why not Japanese Yen?’.   King snaps back:  ‘How many aircraft carriers do they have?’.

Get this silly notion that the $ is not backed by anything. I love it when people start talking about the ‘fundamentals’ of Bitcoin. Always makes me laugh a good hearty laugh.