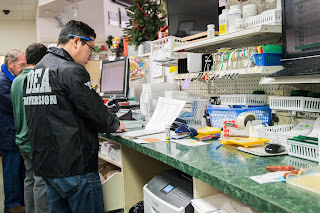 credit:DEA.gov
Back in 2017 I reported on how the Drug Enforcement Administration’s (DEA) Prescription Monitoring Program was tracking 60 percent of Americans personal information and prescriptions.
But now an article in Filter Mag revealed that the DEA wants unlimited access to millions of Americans prescription records.

“The DEA is looking to expand its anti-diversion surveillance infrastructure by being able to search and analyze myriad patient behaviors for the vast majority of controlled and scheduled drug prescriptions—all accompanied by a rapid process for legally unveiling personally identifying information.”

“In early September, the agency requested proposals for the creation of software capable of searching at least 85 percent of all US residents’ controlled-substance prescriptions for certain patient behaviors, as well as prescriber and pharmacist practices.”

The DEA’s Prescription Monitoring Program would let at least 1,100 DEA agents have access to the so-called de-identified patient prescription data simultaneously and it would also have a streamlined subpoena process. (pages 11 and 13 of the DEA’s Proposal for Pharmacy Prescription Data in Filter Mag. )

Why would the DEA want to give 1,100 agents access to “de-identified” patient prescription data and why would they want a streamlined subpoena process if they could not identify individuals?

According to a 2016 NPR article the DEA could be monitoring 119 million Americans taking prescription drugs.

“Nearly half of all Americans over the age of 12 take prescription pain relievers, tranquilizers, sedatives or stimulants, according to a federal survey. And 16 percent of the time those drugs are misused by nearly 19 million Americans. Health officials are calling for more drug treatment, but also for more care in prescribing drugs in the first place.”

The national survey on drug use revealed that at least 119 million Americans took painkillers, tranquilizers, stimulants and sedatives.

A more recent study by Georgetown University’s, Health Policy Institute claims that at least 66 percent of the population or 131 million Americans are on prescription drugs.

Whichever figure is correct 119 million or 131 million, the obvious question everyone should be asking is, why does the DEA need access to millions of elderly Americans’ prescription information?

Who in their right mind believes that millions of elderly Americans taking prescription drugs should be treated like suspected criminals? Yet that is exactly what is happening. When the Feds are allowed to create and use a surveillance program masquerading as a prescription monitoring program, no one is safe, not kids, teenagers or the elderly.

Allowing the DEA to scrutinize the percentage of patients receiving Opioids, Buprenorphine or Oxycodone scripts is horrifying. If you have ever had to fill a prescription or pick up one for a family member you know that they record your ID and all your personal information.

“The impact of including buprenorphine will be appalling for people’s health,” Dr. Hannah Cooper, the chair of substance use disorder research at Emory University said.

Exploring the impact of prescription drug monitoring programs
Allowing federal agents to monitor anyone’s prescription records without a warrant is a recipe for disaster.

“The idea that patient-level data is available to the DEA is quite frightening. We don’t want to make people worry that their decisions will be monitored by this highly punitive federal agency,” said Cooper. “If you’ve been inhabiting a space where you’ve been persecuted by the federal government for some time, and they now have access to your private medical information, there will be tremendous consequences for population health and health equity.”

Here’s one example of how law enforcement could abuse monitoring 131 million prescription records.

This is just one example of how everyone’s lives could be affected by a Federal prescription monitoring program.