The Obama admin abused the NSA to SPY on his political adversary. This FACT comes to light more every day. This is the consequence of allowing the fedgov to SPY on us all. 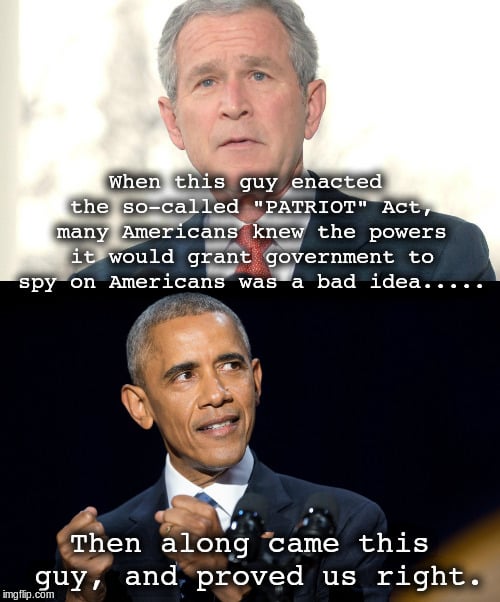 Nunes: Obama Made HUNDREDS Of ‘Unmasking’ Requests – Including Trump Officials

President Barack Obama’s Administration made hundreds of requests during the November campaign to unmask the names of Americans in their intelligence reports – including Trump campaign and transition officials, one lawmaker claims.

House Intelligence Committee Chairman Devin Nunes, a Republican from California, wrote a letter to the Director of National Intelligence saying that the hundreds of requests were made without any specific justification on why the information was needed, The Hill reports.

“We have found evidence that current and former government officials had easy access to U.S. person information and that it is possible that they used this information to achieve partisan political purposes, including the selective, anonymous leaking of such information,” Nunes wrote in the letter to Coats.

Back in March, Nunes told reporters that he saw data suggesting Trump campaign and transition officials were having their names unmasked by departing officials in the Obama White House.

In Thursday’s letter, Nunes said the total requests for Americans’ names by Obama political aides numbered in the hundreds during Obama’s last year in office and often lacked a specific intelligence community justification. He called the lack of proper justifications a “serious deficiency.”

His letter noted requests from senior government officials, unlike career intelligence analysts, “made remarkably few individualized justifications for access” to the U.S. names.

“The committee has learned that one official, whose position had no apparent intelligence related function, made hundreds of unmasking requests during the final year of the Obama administration,” Nunes wrote. “Of those requests, only one offered a justification that was not boilerplate.”

The “official” identified in the letter has been identified as then U.N. Ambassador Samantha Power – who refused to comment to The Hill.

Prosecutors asked a federal judge in Brooklyn, New York, if they could present a trove of new evidence that top NXIVM members took part in an illegal campaign contribution scheme to a presidential primary campaign for “political influence,” court documents reveal.

The alleged scheme was brought to light amid the ongoing high-profile case involving NXIVM, the purported self-help organization based in Albany, New York, which gained infamy in 2018 due to egregious sex-trafficking charges involving sex slaves.

While the court filing didn’t mention the individual by name, NXIVM ex-publicist and whistleblower Frank Parlato confirmed to The Epoch Times that the scheme was aiding Hillary Clinton’s 2008 presidential campaign.

According to the filing, the government intends to introduce witness testimony and documents at trial that demonstrate that in 2007, the defendants and their co-conspirators “were involved in an illegal scheme to exceed contribution limits to a presidential primary campaign.”