In 2020 alone, 3,200 companies spent a record $938m on lobbying. And why shouldn’t they when lobbying has been shown to have a substantial ROI? This coupled with record government spending in the form of contracts and subsidies, is why investors should be tracking government lobbying now more than ever.

Thanks to the Lobbying Disclosure Act (LDA), all lobbying must be regularly reported and made accessible to the public. I’ve been web-scraping the records, and establishing my own lobbying dashboard, allowing users to easily track the lobbying activity of publicly traded companies. 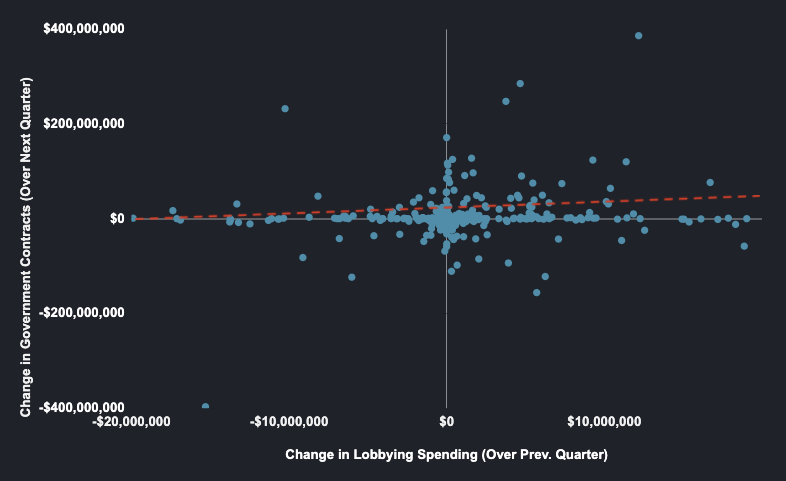 In this post, I’ll give a few examples of the implications of lobbying and the potential political actions as a result that can boost a company’s bottom line.

On 02/23/21, USPS awarded Oshkosh (NYSE:OSK) with a $6 billion contract to produce new postal-delivery vehicle fleet. Shares of Workhorse Group (NASDAQ:WKHS), another finalist in the contract bidding, plummeted 48.44% since the announcement. 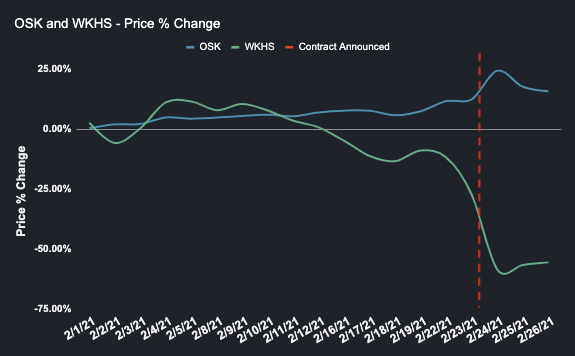 Investors considered WKHS as a serious candidate for the contract. However, after reviewing the lobbying/contract history of both WKHS and OSK, that possibility seems ambitious: 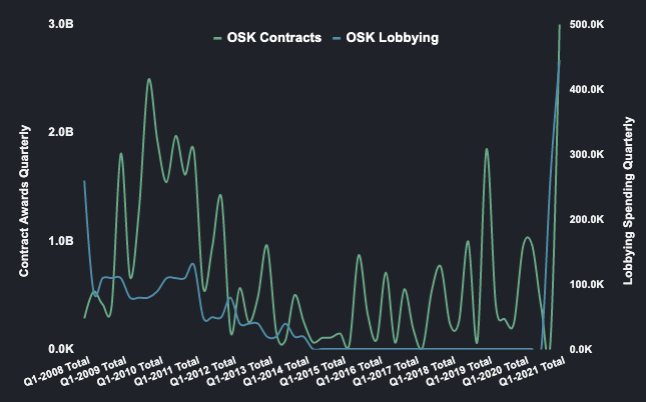 Ethics aside, OSK has a long track record of lobbying and contracts, including $105k on lobbying for postal appropriations last month, and another $125k in 2020 and $32.1 billion in cumulative contract awards before 2020. WKHS has 0 history of lobbying and only one contract worth 29k in 2020.

Lockheed Martin (NYSE:LMT) and the Pentagon have been under fire lately for the F-35 Fighter program as the production costs near $1.5 Trillion over its 20-year program timeline. The graph below displays lobbying spent and contracts award for LMT from 2008 to present: 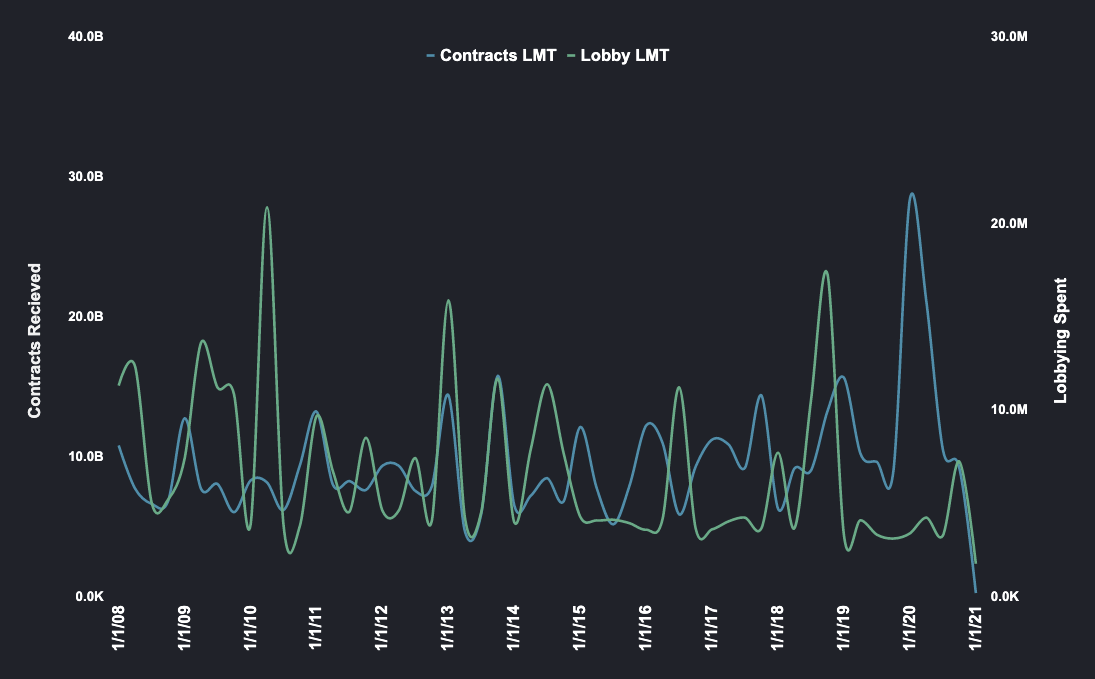 Below is the lobbying and contract history of Renewable electricity company, Ocean Power Tech (NASDAQ: OPTT) since 2009: 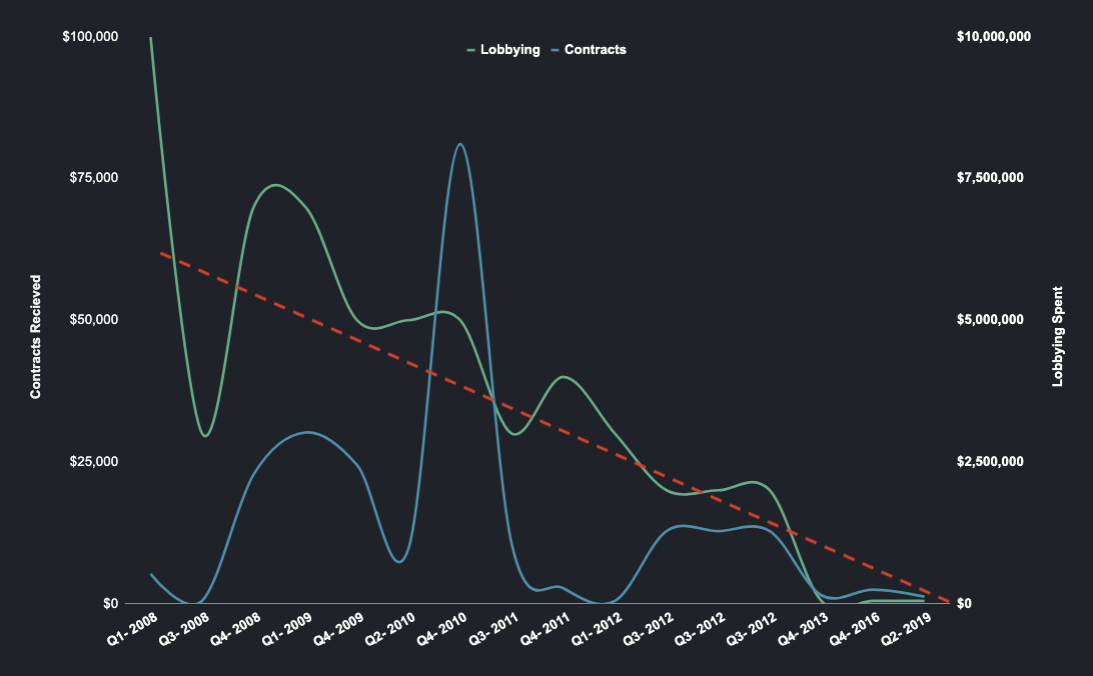 Following Q3 2012, OPTT reduced lobby spending to near $0. Subsequent quarterly contract awards plummeted to an average of just $626 thousand a quarter compared to a $2.3 million running average prior to that. Lastly OPTT’s valuation hasn’t surpassed its 2012 high with the exception of a brief run-up in 2016.

Government contracts are only one metric to gauge the return a company can experience from lobbying. Others include federal subsidies, tax breaks, grants, and deregulation. One example of this is the Uranium industry which has been one of the highest performing industry sectors with an average 138.74% increase in price change among its four largest companies since 10/13/20: 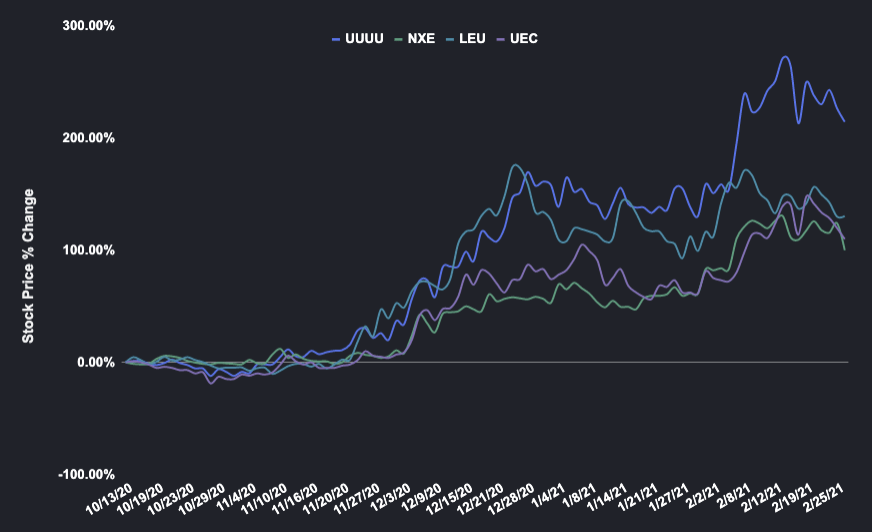 More over, in 2021 uranium suppliers have spent more than than $5m in lobbying in just the first two months. For perspective, last year total lobbying totaled 13.2m. The industry is pushing lawmakers for deregulation and government initiative in the energy, specifically the Nuclear Power Act (2021), a proposed bipartisan amendment to further deregulate and bolster Nuclear Energy in North America. If passed, companies in the industry would be set to gain considerable financial rewards.

With record-breaking government spending in 2020 and continued stimulus packages planned for 2021, it’s crucial to monitor which companies and industries plan to take advantage of this the most.

To see recent lobbying activity for yourself click here. For access to our entire lobbying database and my other datasets, check out my API.