Few markets have been hit harder by coronavirus than United States shale. While global oil prices as a whole have taken quite a beating from a fall in oil demand, a deficit of oil storage, and an oil-price war between the OPEC+ leading members of Saudi Arabia and Russia, the Brent international crude benchmark never went negative. In the United States, it was a different story. Not only did the West Texas Intermediate (WTI) crude benchmark dip below zero on April 20, it plummeted to nearly $40 below zero per barrel in a previously unthinkable upset.

While oil prices have since recovered, shale prices have not bounced back to the $40 a barrel that the U.S. shale industry needs just to break even. In light of this, it’s no surprise that the Permian Basin has been swept by a wave of bankruptcies, shut-in wells, and tens of thousands of fired and furloughed employees.

This severe downturn has many wondering what will become of the U.S. shale industry once demand bounces back post-corona. This week Bloomberg suggested one possible outcome that may come as a shock to the sector. “Once the global oil market emerges from the coronavirus crisis,” Bloomberg wrote on Sunday, “it may be greeted by a surprising change: greater dependence on crude from OPEC.”

Right now, this outcome is pretty far from becoming a reality. “For the time being, the Organization of Petroleum Exporting Countries and its allies are relinquishing their share of the market in a bid to prop up crude prices, slashing millions of barrels of output as the pandemic crushes fuel demand.” In fact, just this week OPEC+ confirmed that they will retain output caps until 2022. But the current oil industry chaos could provide a unique opportunity for OPEC to once again rise to the top of the oil production totem pole. 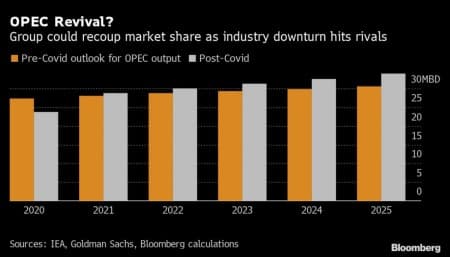 “From the point of view of oil-market share, OPEC will be a clear winner in the coming years,” Michele Della Vigna, head of energy industry research for Goldman Sachs Group Inc. told Bloomberg. “Under-investment in the rest of the industry ultimately plays to their favor.” These predictions should be taken with a large grain of salt, however, as it’s not the first time that this prophecy has been foretold for OPEC, and it has yet to be fulfilled. “Warnings abounded during the last decade that the plunge in investment which followed the 2014 oil-market crash would leave a supply gap for OPEC to fill. But the shortage never materialized as American shale proved surprisingly resilient,” writes Bloomberg.

Can U.S. shale pull off that kind of renaissance again? Some experts certainly think so. This current test of the U.S. shale sector could trim the fat of the shale play and leave the Permian Basin with only the most resilient and resourceful companies, leaving the shale sector in better shape than ever, at least according to Daniel Yergin, a Pulitzer Prize-winning oil historian and vice chairman of IHS Markit Ltd.

Yergin is not alone in his optimism. Some experts are anticipating that the current shutting-in of wells and decrease of production capacity create a supply gap, which will allow oil prices to soar once demand returns, with some experts even predicting $100 barrels in the not-so-distant future. But as Bloomberg reports, “it’s too early to tell whether the latest predictions of a supply gap will prove unfounded, or whether this time really is different. But initial indications do suggest that OPEC could re-emerge from the current round of cutbacks in a stronger position.”

For as many energy-industry pundits who are predicting a U.S. shale comeback, there are also just as many industry experts who are questioning whether or not we are seeing the inevitable demise of the shale industry. With the world (too) slowly trending toward a green energy transition, big-picture thinkers like those brainiacs at the World Economic Forum have suggested that the upset caused by coronavirus is exactly the interruption to business-as-usual that we need to redirect the country’s energies (so to speak) towards renewables and begin building a “new energy order.” Other think pieces have argued (with statistics to back it) that renewable energy may be the most economically viable option to employ the tens of thousands of shale workers that have now found themselves in the lurch.

As for OPEC, they may have another shot at leading the world in oil production, but when even Saudi Aramco admits that peak oil is right around the corner, perhaps even that accolade will soon have lost its luster.