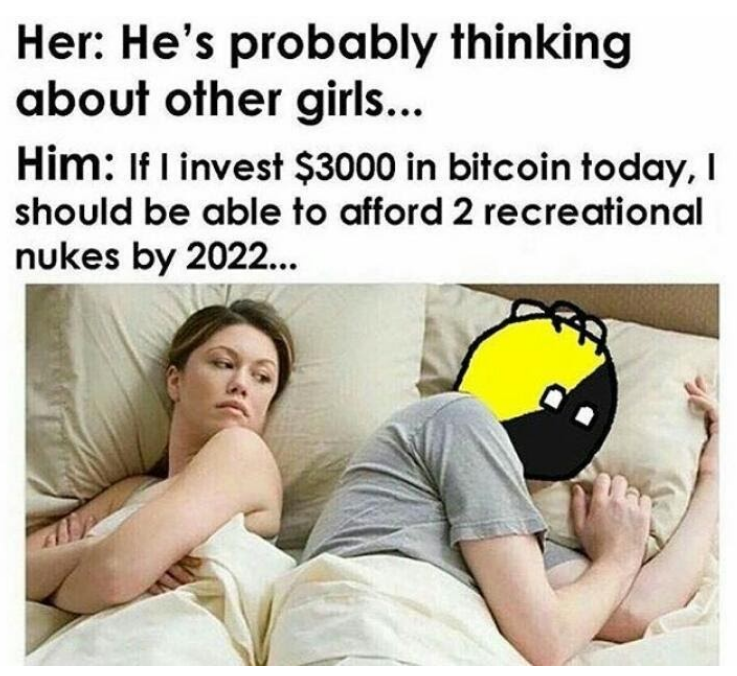 Everything is a psyop nowadays, isn’t it folks? The story of Bitcoin is very interesting. Initially, Bitcoin was released into the wild with a noble mission: to make the financial system obsolete and to bring power to the people, or something along these lines.

With Bitcoin they claimed, you can evade NWO’s SWIFT system and make financial transactions in complete anonymity, more or less instantly, safe and sound, you know the kosher palaver. Forget about the thing that Bitcoin was basically a CIA/NSA creation (just like Google, Facebook et al), nothing to see here, move along.

Fast forward to 2021 and Bitcoin “devolved” from an independent payment system to a “store of value”. Seriously, this is how the Bitcoin craze is sold nowadays. Moreover, big banks/payment processors are jumping into the pool, because the water is very, very warm, and the “value” of Bitcoin soared to almost $50k. Even better, there are rumours that Morgan Stanley intends to purchase Bitcoin to the tune of 150 billion dollars. It makes perfect sense, right?

So Bitcoin is no longer supposed to work as a system for processing transactions. It is now a store of value?

But the value of Bitcoin is the network and the millions of distributed nodes that process the blockchain. /sarc

The reason why Bitcoin is being pushed as a store of value is that the cryptocurrency has failed as a medium of transfer. The network is too slow and costly to use for nearly all daily transactions.

Which is why the big banks are trying to get VISA and Mastercard to jump in on processing virtual Bitcoin. Just like stock certificates, there is no way the chain of custody of a few billion transactions every day could ever be recorded on the blockchain.

Not without grinding the network to a halt. But a virtual IOU system could. As long as nobody actually tries to cash out of Bitcoin they supposedly own, the system will work. It is how MTGox worked and what Coinbase is doing now.

If you haven’t noticed, nearly all of the pro Bitcoin moves over the last year seem to be things that work outside the blockchain. PayPal lets you dabble in crypto, but in a closed system where you can never take your holdings out of your PayPal account.

PayPal most likely holds a certain number of real Bitcoin, but there is no way they are actually using the blockchain to process the moves within that system. They are simply rehypothecating assets they hold, essentially turning Bitcoin into another derivative investment.

How is there value to Bitcoin, if the network that gives it its value is no longer used?

What incentive would there be for the continuation of paying millions of dollars in energy and equipment to process transactions on the network, if there is no profit to be made in doing so?

Bitcoin is now just a giant house of cards, completely manipulated just like everything else Wall Street touches.

Someone who owned $2500 in TSLA two years ago, now sits on nearly a $30k gain. While impressive, this is not enough money to materially change that person’s life. It isn’t even enough money to buy most new cars.

Plus you can only realize the gains when you sell and every single stock is so massively overvalued that insanity doesn’t even cover it. Hardly any little trader ever sells when they should, because they are afraid to miss out on even more impressive gains.

Look at the institutional holders of TSLA. Musk has added over $100 billion to his paper fortune. You buying a few shares of Tesla doesn’t make you rich, but it makes Elon a few billions every day.

That is the game. That is why they want you to play.

The wealthy don’t get wealthy selling to themselves, they get wealthy conning you into buying pieces of the float for more than they paid.

This is also the same scam being run with Bitcoin.

From the very beginning it was designed as the ultimate Pyramid Scheme. The early adopters mined most of the coin when it was worthless, and barely cost anything to mine. They then sold pieces of a few coins to other people, who each sold pieces to another, each time massively inflating the value of a whole Bitcoin that the early adopter held.

I take 10 Bitcoin that were worth $1 a piece and then split one into ten pieces. I sell each piece for $.10. Each Bitcoin is still worth $1. But I tell each person who bought a piece to break their piece into ten more pieces and sell each one for $.05. For every one they sell, they make four cents. That is a massive gain percentage wise, but in reality they hardly made anything. Here’s the thing though, each Bitcoin is now worth $5. I made $45 one the other 9 coins I held onto. That is how a pyramid scheme works.

You get others to do all of the work and spend the bulk of their money making you richer for doing nothing but being at the top of the pyramid.

When I was in school, I had a part time job doing destructive testing on electric motors. I still remember the smell of melting epoxy and burning motor windings right before the motors blew up.

Hey, what’s that awful smell coming from the markets?

All the world’s a reality show of a highly dysfunctional relationship.  It makes you feel dumber for having watched it but most still can’t seem to turn the channel.

It’d be more entertaining if we weren’t all chained together on this sinking ship.