The idea of a “third way” in economic policy has fascinated politicians, scholars, artists, and the voters around the world. Surfing this wave, the welfare state has spread quickly in recent decades.

Some even say that Nordic countries are the definitive evidence that it is possible to deliver a prosperous and egalitarian society through state intervention, mixing free markets with high taxes in order to get high living standards and a smaller inequality gap. But is the matter really settled?

Well, much of Latin America tells another story; a sad story where the welfare state leads to a perennially weak economy (with seemingly endless cycles of recessions and stagflation) and keeps many living in poverty.

People in the West have repeatedly been told that the way of reducing poverty and curbing social inequality is enlarging the government’s role in the economy through the expansion of public services and public works.

In Latin American, this way of thinking has overwhelmed dissent.

According to scholars, since early 1970s the welfare state has been implemented throughout Latin America (in its variations) in at least two types: (1) a public universal system of integral benefits, in which the state guarantees social rights to everyone (Nordic style); and (2) a dual system that places the poor in the public sector (health care and pensions, for example), while those with higher incomes are encouraged via policy to move toward a private market (German style).

What has been the result?

We cannot say much good about these countries’ economic growth rates. Latin America GDP per capita rose modestly between 1950 and 2006. Over the same period, comparatively, East Asia and World GDP per capita roared. In other words, particularly (and curiously) after the early 1970s, Latin America has lost relative income share on a consistent basis (i.e., underperforms steadily) in relation to the rest of the World (on average). Check this out in the chart below: 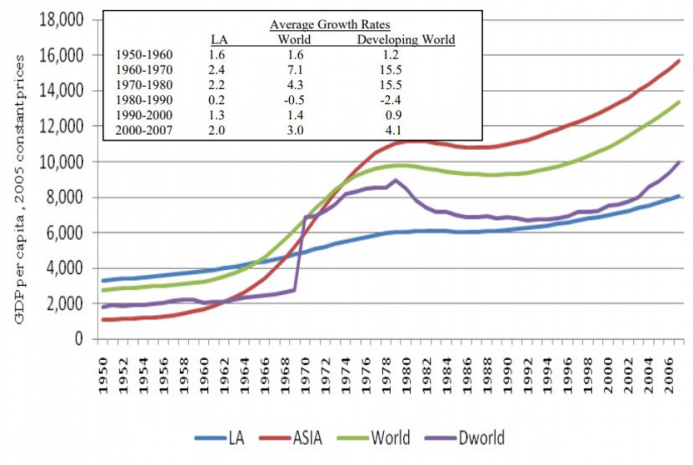 On the other hand, we can say some (bad) things about these countries’ public spending, which skyrocketed. This is hardly surprising, for advocates of a strong welfare state, the answer to most everything (from curbing poverty to fighting recessions) is to increase public spending.

And spending certainly has increased, with enormous increases in debt to accompany the spending.

Did it work? That is, did public spending boost these economies? Certainly not.

In many areas, only more crisis has been the result.

But why do politicians keep turning to the welfare state — and thus, more government spending — as the answer to economic woes in Latin America?

It is because the welfare state’s advocates are extremely successful at placing the blame on markets, or on other imagined causes.  If confronted with the lack of growth endured under a growing welfare state, politicians often provide a response such as “such figures don’t prove anything at all! Markets are even worse … North American Imperialism is the problem … capitalists always find a way to exploit the people,” and so on.

In truth however, what moderate success these countries have had, has been due to what little market freedom exists.

After all, the historian and sociologist Rainer Zitelmann reminds us that hunger and poverty are not fought through aid but through entrepreneurship and capitalism. He quotes the former Senegalese president Abdoulaye Wade, who said:

Countries that have developed — in Europe, America (the US), Japan, Asian countries like Taiwan, (South) Korea and Singapore — have all believed in free markets. There is no mystery there.

If Latin America wants welfare states, it must first pave the way for strong markets, as has been done in parts of the world that now, unfortunately, forget the source of their prosperity and point to the welfare state as the reason for their success.

Jean Vilbert holds a Bachelors and a Masters of Law. He is currently a Judge and Professor in São Paulo, Brazil.