Fresh off his capitulation in December to stave off The Great Recession Part 2 by ceasing the Fed’s rate-raising, now he is greasing the rails toward 0% interest rates again, an inevitability we’ve been highlightingsince the move.

This has enormous ramifications…

When the positive jobs report came out recently, the market immediately gapped down. Why? That’s good news, right?

Not anymore. Good news, actual indications the US economy is truly healthy, means the Fed is less likely to cut rates. And since super-cheap debt is the fuel driving stock prices ever higher, the market now perversely celebrates terrible macroeconomic news and falls when the economy shows any sign of sustainable health.

The weaker the economy is, the better it is for stocks. How much more broken a market can there be?

The Fed rate is the entire ballgame now. Wall Street is all-in on debt, on leverage, on the reality that endless near-0% financing is the only thing that stands between all-time stock market highs and the beginning of the next major financial crisis.

Why is the stock market continuing to attract so much capital? Where else can you realistically put investment money to work? Positive-yielding fixed-income options are few and dwindling as yields trend toward zero.

Savings accounts are on their way to penalizing you for having money in the bank, as they already do in countries like Switzerland and Germany.

And US Treasuries? Risk-averse capital will always choose the place that is most stable with the lowest carrying cost or the highest yield, risk-adjusted. Today the 10-Y US Treasury offers the highest 10-Y relative yield of all major world currencies (a minuscule 2.06%, and soon to fall from there as the Fed cuts rates): 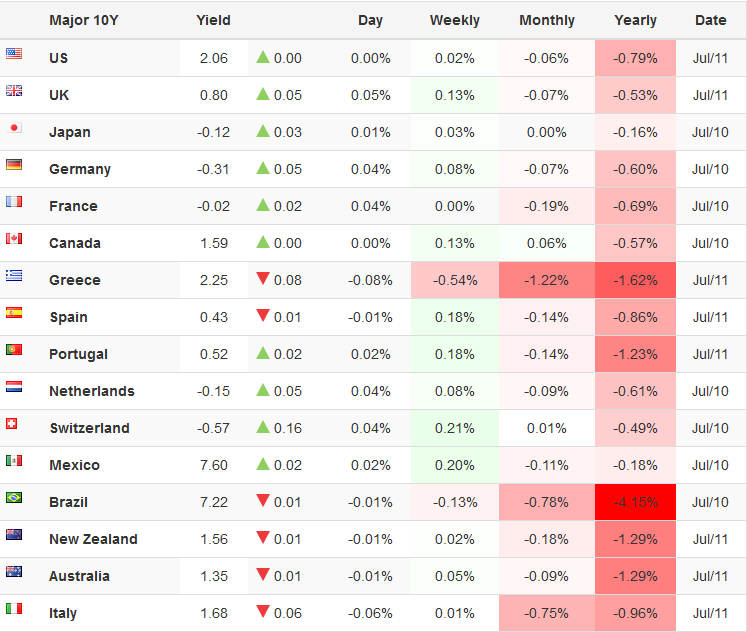 This scenario has been good for the dollar, which is trading near a 15-year high versus a basket of global currencies… While our interest rate policy has been painful for savers, it wasn’t nearly as painful as for those in every other major economy.

Each successive step the Fed takes toward lowering interest rates is also good for precious metals now. And if, heaven forbid, Treasuries follow the rest of the world’s developed economies and offer negative rates, the world’s favorite safe-haven investment will no longer be an option for investors unwilling to lose capital for the privilege of owning them.

Which will leave gold, front and center, as the last line of portfolio defense against a US stock market that is more overvalued than at any time in its entire history, except for at the very top of the dotcom bubble in 2000: 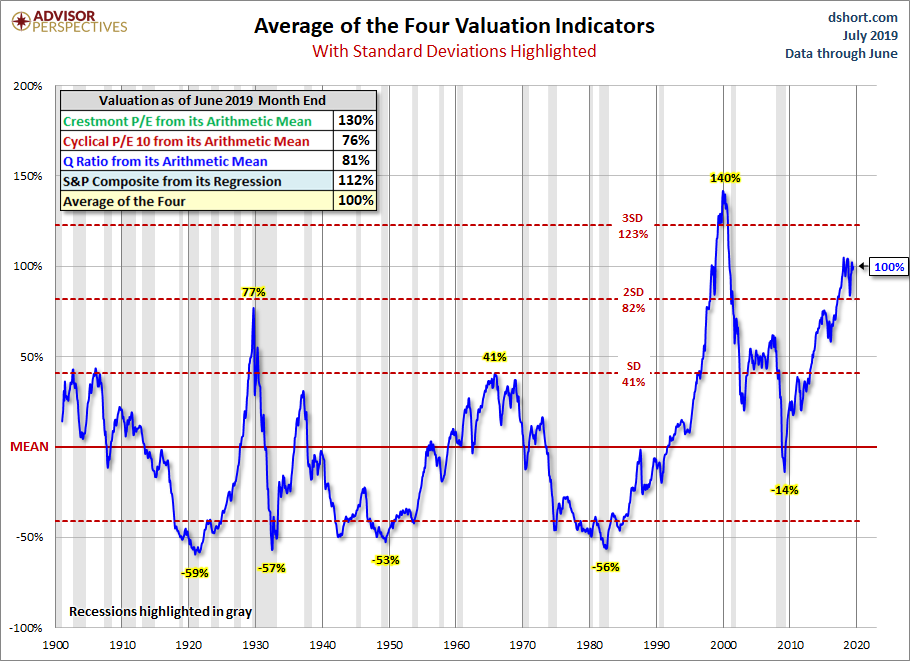 To be clear: All of this is potentially fantastic for gold. For the first time ever, gold’s primary competition for safe-harbor investment, US Treasuries, have a realistic chance of returning nothing, or even a negative yield, an actual carrying cost.

If that comes to pass, with the vast majority of Treasury investors wisely unwilling to invest at a loss, gold will remain as the one clear best option to hedge market risk that is near all-time highs.

The capital inflows to gold could be like nothing the precious metals market has ever seen before. And you have the chance, today, to buy gold before the rush.