Yesterday, the Federal Reserve stated it would no longer be “accommodative” with its monetary policy.

On that same day Fed chair Jerome Powell stated that stock market valuations were in the “upper reaches of historic ranges” i.e. bubbly.

And most importantly, the Fed stated it would likely hike rates again in 2018… with another three rate hikes in 2019. If each rate hike were for 0.25%, the Fed is targeting an interest rate of 3.25% before it’s done.

Why is the Fed acting so aggressively? Remember, both the Bank of Japan and the European Central Bank are running NEGATIVE interest rates while also engaging in Quantitative Easing policies.

Meanwhile, the Fed is planning a total of 12 rate hikes before it’s finished… while engaging in a Quantitative Tightening program that would drain an amount equal to Sweden’s GDP from its balance sheet every single year.

Because the Fed is trying to get the bond market under control.

In chart form, the Fed’s primary concern is this… 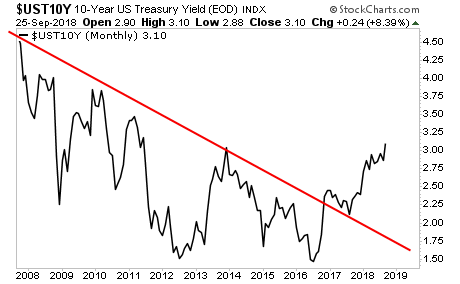 The yield on the 10-Year Treasury bond, the single most important bond in the world, has broken a multi-decade downtrend. If this does not reverse soon it means the 30+ year bull market in bonds is OVER.

You probably should not look at this chart pic.twitter.com/T7Y7fKKjuy