You try to build a better mousetrap, and you end up with a contraption so complex you lose track of all the moving parts and snare yourself.

Over the course of decades, the Fed has made itself so enmeshed in the operation of the US economy that it can’t sneeze without setting off a chain reaction of a dozen different consequences, most of which it doesn’t even realize are taking place. And left it vulnerable to exigent global threats it can’t control at all.

Now the machine of its own creation has turned against it. Whether it raises rates, cuts rates, or keeps rates the same, all the market pain they’ve sought to eliminate has simply been stored up and delayed, and will inevitably break through, likely all at once.

Something curious took place one month ago when the PBOC announced on April 17 that it would cut the reserve requirement ratio (RRR) by 1% to ease financial conditions: it broke what until then had been a rangebound market for both the US Dollar and the US 10Y Treasury, sending both the dollar index and 10Y yields soaring… 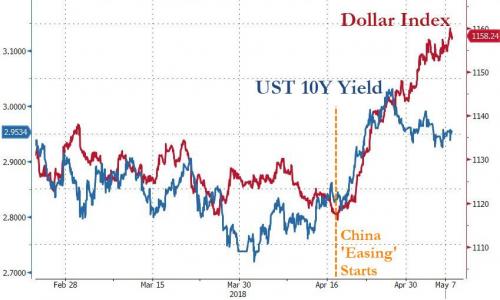 … which led to an immediate tightening in financial conditions both domestically and around the globe, and which has – at least initially – manifested itself in a sharp repricing of emerging market risk, resulting in a plunge EM currencies, bonds and stocks. 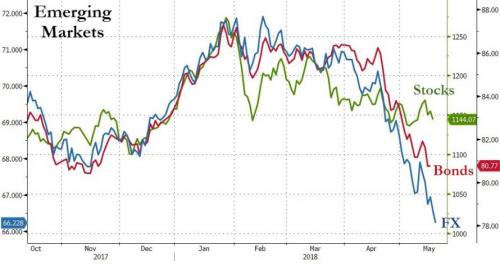 Adding to the market response, this violent move took place at the same time as geopolitical fears about Iran oil exports amid concerns about a new war in the middle east and Trump’s nuclear deal pullout, sent oil soaring – with Brent rising above $80 this week for the first time since 2014 – a move which is counterintuitive in the context of the sharply stronger dollar, and which has resulted in even tighter financial conditions across the globe, but especially for emerging market importers of oil.

In short, while the Fed has found itself trapped before, it was only the recent spike in the dollar (thanks China) that has forced the Fed to act, with either decision – either further hawkishness or a dovish relent – leading to major market pain. And the longer the Fed delays making the key decision, the more painful the outcome will eventually be.

ORIGINAL SOURCE: Why The Soaring Dollar Will Lead To An “Explosive” Market Repricing: A Flow Chart by Tyler Durden at Zero Hedge on 5/20/18