QUESTION: Mr. Armstrong; You seem to be the only person who distinguishes private interest rates v public. Has the marketplace gone insane along with Trump demanding 100 basis point cut by the Fed? I find it curious how they only quote the same people in the press who seem to preach the government position all the time. They constantly try to ignore you in the press and even Wikipedia distorts everything and fails to mention the banks pled guilty and had to repay your clients. Just so biased. Now they say deep negative rates are no problem. They only say what the government wants them to say. Will this all end very badly?

ANSWER: There is ABSOLUTELY no historical evidence that negative interest rates will ever stimulate the economy no less are they even viable. This wipes out pension funds where many around the world are obligated by law to buy government paper. Social Security in the USA is 100% in government bonds. It is beyond comprehension where all these people cheer negative rates as if this is a good thing. The US share market declined with the rate cut, it did not rally. 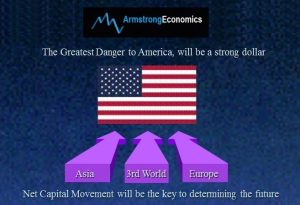 People are convinced that an INVERTED YIELD CURVE foretells of a recession. They have no idea about capital inflows. Even in Thailand, which has benefited greatly from the China-US Trade War shows that its currency has been the RARE exception rallying against the dollar. That may change now if the dollar closes above the July high here at the end of August.

I am in Asia right now. The greatest fear is that China will send in troops to squash the protests in Hong Kong. Many fear this will be another Tiananmen Square. I would not go that far. The solution would be a political one and to repeal the extradition order. People do not fear that a wanted Chinese will flee to Hong Kong and be protected, but that they could be extradited to Beijing and put on trial for things they did or said in Hong Kong.

This is sending capital to the USA and the same capital flows from Europe and doing the same thing. That capital is now incentified to buy US debt looking for more rate cuts and their bonds will appreciate. It takes a sublime idiot not to see this trade. They are punting – not actually buying negative yields for the long-term. This seems to be coming to an end in 2020. 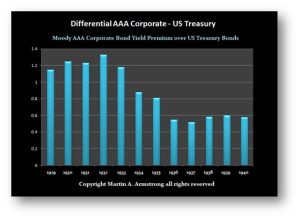 As I have stated many times, DO NOT EXPECT the official rates to rise outside the USA. All other central banks are trapped. They cannot afford to allow rates to rise and blow up government budgets. This will widen the gap between public and private debt. Back in the ’30s, as governments defaulted, smart money fled to private AAA corporate bonds. We will see the same trend here again, but at the same time, banks will look to the future with tremendous uncertainty and will NOT be lending so easily. Expect rates to rise on credit cards where they make their money and long-term mortgages. If the banks cannot resell the long-term debt mortgages, rates will rise widening the gap with the government.

Chairman Powell is not is a nice place. He cut rates NOT for the USA, but because the rest of the world is imploding and Europe shows no signs of reversing their policy. If Powell lowers the rates 50 or 100 bp, domestically people will be taking this as confirmation a recession is coming and the stock market will continue its decline.

Powell is in a no-win situation. This is the FIRST time in history the Fed cut rates at the top of a market and instigated a decline rather than cutting rates in response to a decline. This only proves the Fed’s actions are concerned NOT for the domestic economy, but primarily for Europe and Asia second.

This going to make for a HIGHLY unusual WEC this year. We are breaking historical ground. There no way for this to end but VERY badly. They do not want people to read this blog. They want to keep people accepting the government narrative.