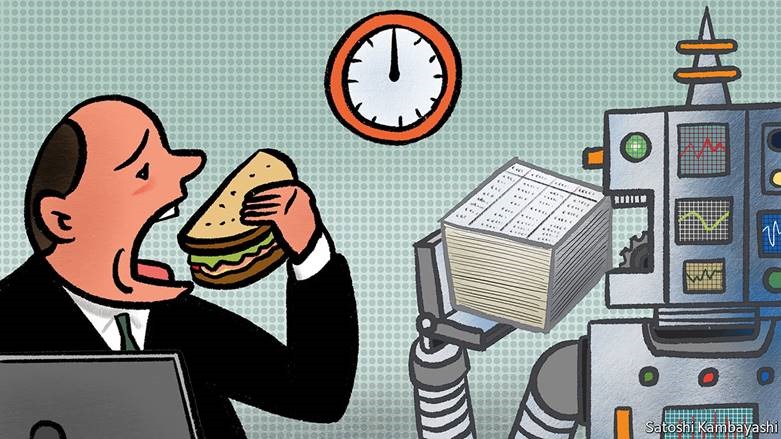 Several Wall Street investment bank traders are munching on their lunch, which was hand-delivered from Delmonico’s Restaurant directly to their desks.

The topic of discussion du jour is a recent Bloomberg interview with JP Morgan’s Marko Kolanovic, the so-called “half god, half man” of quantitative and derivatives research.  Kolanovic fears that the growth in computer algorithmic trading and Artificial Intelligence will make the market increasingly fragile and vulnerable to a catastrophic event as computers take more and more advantage of slow reacting human investors.  A sudden collapse in market liquidity would leave investors holding the bag if computers sense a significant trading imbalance and automatically unload their long positions and cancel their bids.

The traders are reminded of Michael Lewis’s book, Flash Boys, which had targeted them as high speed predators.  They reminisce about the utter failure of Lewis’s bestseller to halt the windfall gains they continue to enjoy through the use of manipulative high-frequency algorithmic (HFA) trading.

Their mood is lighter than usual and it isn’t because they pulled down several million dollars earlier in the day through their specialty: computerized (HFA) trading.  Instead, it is the futility and folly of doomsayers to curb the easy profits they make (earn would be too strong a term) every single day through nifty algos and AI machine-learning.  They (or more accurately their computer programs) have mastered the art of head-faking and juking investors out of nickels and dimes in the ultra-high volume via the churn their computers generate.  They consider themselves financial alchemists for their prowess in turning computer code into big bucks.

Here is a snippet of their satirical conversation.

Trader # 1:  Remember when that pain-in-the-ass Michael Lewis came out with his bullshit blockbuster, The Flash Boys, which made us look like we spend all day ripping off mom-and-pop stores and tapping into their kids’ piggy banks.  The infamous flash crash brought all the investigative wizards out of the woodwork.  I still can’t believe a mutual fund in bumfuck Kansas back in 2010 caused us to temporarily pull our bids and closeout our long positions.  That meathead move brought unwanted scrutiny on our bread-and-butter business model.  Instead of putting their computers to good use as we do, those assholes tried to hedge their long positions all at once and clogged up the entire system.  Apparently, some fat-fingered pinhead made a similar mistake and caused the NASDAQ to shut down.  Not only did that bring heat on us, it prevented us from making surefire profits for three whole trading hours that day.  Thank God, we incorporate multiple safety valves in our algos to automatically detect an imbalance so we don’t get waxed in a meltdown.  The last thing we need is useless government bureaucrats thinking they have to do something to placate the public, when we know and they know, they can’t do anything to stop us.  HFA trading is here to stay.  They can’t un-ring the bell without bringing down the whole fucking financial system.

Trader # 2:  Yeah, we also have those pointy-headed quants giving us fits as they try to wring out a few bucks using their probabilistic models.  They churn out massive volume just to cherry-pick a perceived mathematical disparity in the market.  Fuck that rocket science crap.  With so many damn computers and algorithms doing their own thing, traffic is getting congested out there.  It’s too easy to trip over each other and cause a crash, albeit a temporary one in most cases.  Don’t get me wrong.  I’m not saying I want a traffic cop looking over our shoulder.  I just want these rookies to get the hell out of our way.

Trader # 3:  These yo-yos don’t understand that the expressway to easy profits on a day-in, day-out basis is old-fashioned pump-and-dump algorithms.  I love the word ‘algorithm’.  Eyes glaze over immediately when people hear that word.  It’s like swinging a watch in front of their faces.  They should only know that algorithms are nothing more than simple software routines that any high-school dropout in his most inebriated state can easily put together.  Fortunately, our firm wants lettered guys like us with advanced business degrees and computer skills to run their proprietary trading desk.  It gives the appearance that we are savvy street traders, who have an uncanny ability to accurately discern the prospects of the companies we trade.  Our real skill, however, is knowing how to juke investors out of a few pennies in high volume 24/7.  We are rainmakers.  Our cheerleaders over at CNBC think we are geniuses. Our bosses love us and our benefactors in the federal government love us.  After all, we provide a valuable service to humanity.  We keep the market from crashing and protect American investments in the process.  Therefore, we deserve the right to exact a small tax on investors.  Our friends over at the Fed and the Treasury understand this and will pull out all the stops to protect us.  It’s a win-win situation.  They use us as an invaluable tool to implement economic policy and we get to bag big-time profits every single trading day.  Some call it market manipulation, but that is nothing but a jealous slur on our professional integrity.  I prefer to call it nuanced trading.  Although, I have to admit flash trading is a little over-the-top.  We get to look at another player’s hand before we make our move.  God bless the SEC though.  They have been studying this for years and still haven’t banned what is blatant cheating by any definition.  It’s self-evident.  That’s how in the tank they are.  Even if they weren’t in the tank, those idiots couldn’t find their ass with both hands and a GPS device.

Trader #1:  This guy Lewis thought he discovered the Holy Grail.  We’ve been using high speed computers for years to front-run slow-footed retail investors and beat them for a few pennies on each trade.  Humans have been using speed to get an edge on other humans since time immemorial. This is old news.

Trader # 2:  That’s right.  We partner with the exchanges to send us trading data on special feeds ahead of everyone else so our computers, combined with ultra-high speed data links, can get in middle of each transaction to score a few pennies.  It is only natural that we should do that in huge volume to make it worth our while. Why leave millions of risk-free dollars on the table when it’s there for the taking. It would be un-American for us to do anything else.  After all, America is the land of opportunity. Is it not?

Trader # 3:  Absolutely.  If we didn’t take advantage, someone else would.  And then we would be fools to ignore the gift that keeps giving.  Even Lewis admits that we aren’t doing anything illegal. To be honest, it’s hard for me to understand how we get to see other people’s trading data and can use that information to front-run them.  If someone steps in front of another person’s trade and makes a profit from doing so, it’s illegal, but if a computer does the same thing, it’s alright. Go figure. We didn’t make that determination.  The SEC did. We’d be the last ones to complain about the wisdom of their judgment. One millisecond is an eternity when signals travel near the speed of light, but most people don’t understand or appreciate how relativity can work in our favor.  A few milliseconds is all we need to work our magic and pick off loose change from investors in high volume. The beauty is they don’t even know that they’ve been shortchanged. So what’s the big deal? Just because Michael Lewis showed how we do it doesn’t change anything and won’t change anything.  We are still here doing what we do best: making easy money. In fact, we are pulling in a few hundred thousand as we are having lunch. Our programmed computers are on autopilot crunching the numbers and depositing the profits in our proprietary accounts. It’s like a smooth-running conveyor belt. We are just sentries watching the computer screens in case anything goes awry, which thankfully is very seldom.  Our most important job is to make sure the equipment is powered up and running as designed so there is no interruption in the endless flow of profits.

Trader # 1:  Getting back to the increase in market mishaps for a second, I am worried that this whole thing can come crashing down around our ears.  The half-god, half-man guru over at JP Morgan is shouting fire in a crowded theater when he himself is practically doing the same thing we are.  He says the market is fragile because computerized trading generates most of the market volume.  Next time, the market might plummet and stay down through no fault of our own.  Our computers are programmed to react instantaneously if a dislocation is detected in the market.  In some cases, we have no idea what is causing the imbalance between buy and sell orders.  The safest thing to do is step out of the way until the dust settles.  The problem is our competitors are doing the same exact thing at the same exact time.  Liquidity dissolves in a matter of seconds and causes the bottom to drop out of the market.  It’s that simple, but it’s not our fault.  Only rookies catch falling knives.

Trader # 2:  Although we have a nice thing going, we can’t afford another major crash, even a temporary one, because the public, and certainly the media, will blame us.  They are already asking hard questions.  The outcry will make our lives miserable, even with the government running interference for us.  If push comes to shove, the politicians will hang us out to dry.  The argument that HFA trading provides needed market liquidity, which narrows the spread between bid and ask prices, is wearing thin.  The truth is most of our nuanced strategies would be totally useless without high volume, high frequency trading.  Our profits would dry up in a heartbeat.  The suits in our front office are excellent at deflecting criticism but the tenor of public opinion would turn decidedly against us.

Trader # 3:  Listen, this conversation is giving me indigestion.  We are safe.  There is no way the regulators are going to admit they allowed nuanced HFA trading to go on for years and then suddenly discover it is illegal.  The public would be outraged and take to the streets with pitchforks in hand.  If they haven’t banned flash trading, why does anyone think the SEC is going to ban our more sophisticated pump-and-dump, front-running trading strategies?  No fucking way.  Besides, HFA trading is well over half of the market exchange volume.  If it dries up, the market crashes.  And that’s just what the government does not want.  That’s also why our friends at the Federal Reserve are keeping interest rates ultra-low.  We use easy money from the Fed to fuel the stock market.  We collaborate with the Fed to provide market plunge protection.  We’re partners.  We have earned the right to wet our beaks.  In short, we have the government by the short hairs.  Besides, we kick over a nice piece of our profits to fund politicians of both parties.  We are golden.  We are untouchable.  Now, please excuse me while I wolf down this steak sandwich.

And that is why the wise guys always win.