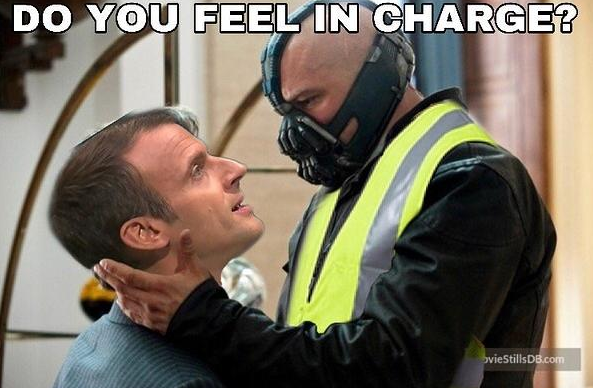 It’s time to pay attention to what is going on in France right now.

On Saturday, the ‘Yellow Vest’ protests in Paris took over the Champs-Elysees. The protests started out as a rebellion against fuel prices but have since grown over the past few weeks into widespread civil unrest in the French capital and throughout the country. Hundreds of thousands of Yellow Vests have rioted and protested across France over the last three weeks.

It all started on November 10 when thousands of demonstrators demanding lower gas prices and taxes marched on the Champs-Elysees. Since then, the destruction has escalated, the crowds of protestors has grown, and the country has fallen into chaos. Nevertheless, the protests are met with a significant level of support, with 84 percent of the French public calling it “justified,” according to Odoxa-Dentsu poll for Le Figaro.

Riot police used tear gas and batons against young people during the protests on Monday. French high school students are against plans to apply academic selection at public universities. Hundreds of schools throughout France were also blocked by students. Tires were set on fire and traffic was blocked.

Violent protests broke out across Paris over the weekend with protesters flipping over cars and smashing police cars. Windows were smashed, cars torched, buildings burned, barricades set aflame, stores looted, and graffiti sprayed during France’s worst rioting in half a century.

Police blocked off access to the Champs Elysees on Saturday after tear gas and smoke took over the area. The violence was then dispersed throughout other parts of the city, with protesters hitting shops, banks, cars, and buildings in surrounding streets as they continuously clashed with police.

According to Bloomberg, President Emmanuel Macron is now considering emergency tax cuts to quell the rioting. Finance ministers are discussing the crisis and how to proceed. What started out as demonstrations over fuel taxes has accelerated to become the existential threat to Mr. Macron, who has lost control of his country. A real feeling of inequality has gripped the country. And Macron better act fast, because there are another 15,000 Yellow Vests ready for a new round of protests on Saturday in Paris, roughly three times as many as last weekend. There are also 104,000 interested in going, according to the Facebook event. 378 protestors have been arrested so far.

The French are more than discontent. They are angry. They are legitimately outraged. And they want to remind the elites of the power of the masses.

Neil Clark, a UK-based journalist and broadcaster, recently tweeted, “The elites have gone too far. The costs of the 2008 financial crash have been met by ordinary people, not the greedy bankers & financial spivs who caused it. The people have had enough of austerity & falling/stagnant wages. What’s happening in #France now is only the start.”

READ  Rand Paul Just Issued An Emergency Warning! The Left Is Doing Everything In Their Power To Hide It

And what was Macron busy doing while Paris burned? Writing an op-ed in the Wall Street Journal on climate change! The Western media love Macron, of course, but his people do not. The French president has a 27 percent approval rating and his nation is rioting. The disconnect between the wealthy elites and the struggling poor and middle class has grown drastically wider in France since the recession and the people are making their voices heard. The Yellow Vest leaders, if there are any, refuse to negotiate with Macron.

The protest poses a real threat to France’s retailers. Carrefour and Casino are already battling against against each other in a bitter price war while trying hold off Amazon’s efforts to expand in France. Retailers have been hit hard by the blockages throughout the country in recent weeks and some supermarkets have been closed for days at a time. The big box food stores recorded a drop in sales of 35 percent on November 17 and 18 percent the following Saturday, according to Nielsen.

Consumer confidence has been falling in France this year due to the perception of shrinking purchasing power. The protests have only dipped that confidence level even more. The rioting in recent weeks reveals a country at odds with its leadership. After Brexit, Greece, and Italy, this is yet another moment for the European Union that could further signal that the organization is coming to an end in the years to come. This could be another nail in the coffin of globalism as nationalism is on the rise throughout Europe following the mass migration from Syria and North Africa. 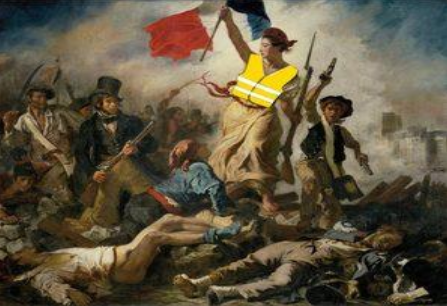 Also on Monday, more than one hundred ambulance drivers joined in the protests. Populous movements like these tend to gain traction from a number of different sections of society when there is a real grievance behind it all and what is going on in France shows no sign of stopping anytime soon.

Tires were set on fire and others chanted, “Macron resign!” according to the Associated Press. Another protester held a sign reading, “the State killed me.”

These protests that are in support of the Yellow Vests are specifically showing their opposition to Article 80 of Macron’s 2017 Social Security Budget, which reforms the financing of the social security system and how ambulances are reimbursed for their services. The government is forcing hospitals and clinics, as opposed to patients, to decide which ambulance company to use. Smaller ambulance companies fear larger ones will force them out of the industry.

Marine Le Pen, leader of France’s right-wing National Rally party who lost to Macron last year, proposed a solution to this crisis. She thinks the government should dissolve the lower chamber of the French Parliament and hold new elections.

“It is necessary to implement proportional representation and dissolve the National Assembly in order to hold new proportional elections,” Le Pen said in an interview with TV channel France 3. She went on to add that the current government has no choice in the current situation.

President Macron has condemned the violence of the protests and pledged to bring perpetrators to justice. He also said he would not back down and revise his decision on the fuel price hike. Another example of extreme environmentalism bringing about real life destruction to your country! He has shown no understanding of the real issues behind these protests.

How much longer will Macron stay in power? How much worse will the protests get? Does Le Pen have a shot to win the presidency she came close to winning last year? Should France hold new elections?

Whatever happens, something needs to change. Action needs to be taken. The French people have had enough. It is time for Macron to go. He’s no longer in charge. He no longer has the backing of the people. He needs to step down or make radical changes in the next week, or things will really get ugly from the streets of Paris to the shores of Marseilles.