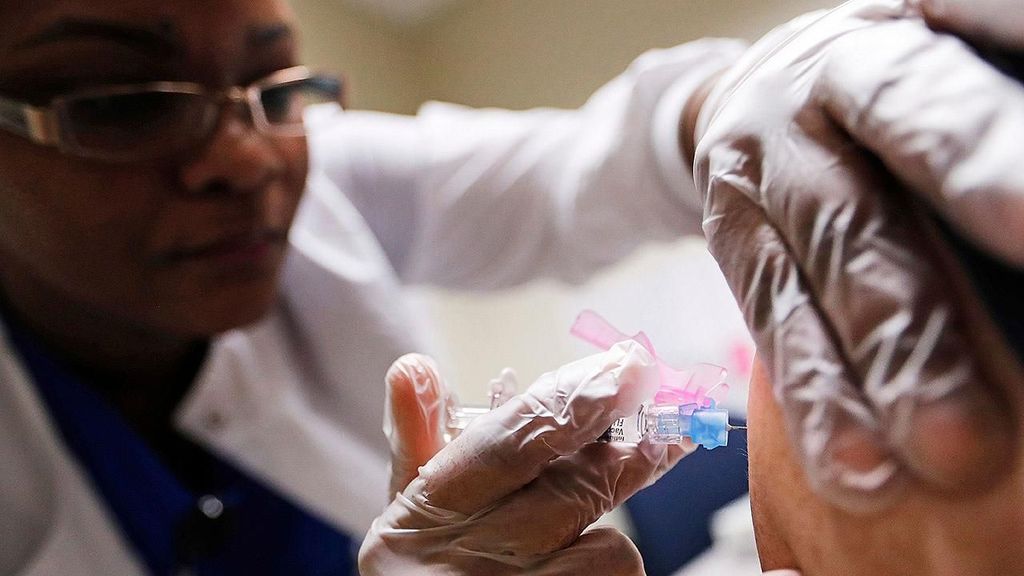 The amount of influenza ravaging the U.S. this year rivals levels normally seen when an altogether new virus emerges, decimating a vulnerable population that hasn’t had a chance to develop any defenses.
Unfortunately, more deaths are likely to happen,” Schuchat said. “Over the next few weeks, we do expect and it would make sense to see more pneumonia and influenza-related deaths. The people who are likely to die are already in the hospital.”
This year’s flu could be more calamitous than outbreaks going back decades, but there’s no way to know for sure.
fortune.com/2018/02/10/american-flu-deaths/
Ok this is scary numbers

A Weekly Influenza Surveillance Report
www.cdc.gov/flu/weekly/usmap.htm
Existing drugs, including Tamiflu, work to block these viral copies from escaping the cell, the Journal reported. The experimental drug, however, kicks into action earlier, working to block the virus from hijacking cells in the first place, the Journal said.
Japanese drug regulators could approve the drug for use in Japan by early March, the Journal reported. The drugmaker plans to apply for approval in the U.S. this summer; however, the drug likely wouldn’t be available here until next year.
www.livescience.com/61725-experimental-flu-drug-japan.html
causing 1 in 10 deaths
This is a difficult season, and we can’t predict how much longer the severe season will last,” she said. “I wish there was better news, but everything we are looking at is bad news.”
www.sfgate.com/business/article/flu-deaths-america-how-to-prevent-cold-epidemic-12570347.php
If your child recovers, then gets sick again: Every year, about half of pediatric flu deaths are in otherwise healthy children, and Swanson said she’s been hearing anecdotal reports that some of the deaths this year involved kids who got over the flu but then got sick again from another secondary infection. “That tells me they had a viral infection from flu, their body did a decent job of trying to get rid of the virus, but in that process they got set up for secondary infection — severe ear infection or pneumonia,” Swanson said. So if your child is getting better and then takes a turn for the worse, see a doctor.
www.vox.com/2018/2/10/16995874/flu-symptoms-2018-children
Yes, you CAN get the flu twice
www.foxnews.com/opinion/2018/02/07/dr-marc-siegel-yes-can-get-flu-twice.html
That would be terrible


How people die from the flu
lung inflammation
sepsis
pneumonia
www.popsci.com/die-from-flu-symptoms#page-2
This is from 2013(BTW flu stays alive on hard surfaces for 24 hours ) watch what you touch
20 Surprising Ways to Prevent Colds and Flu
when someone is sick in an office, it takes only four hours (!) for surfaces like coffeepot handles, copy-machine buttons and the fridge door to show traces of infectious virus.
sip tea
protein-rich foods
antibacterial wipes
don’t drink alcohol
Breathe out when near someone coughing
Zinc
use your own pen
nasal rinse
drinking juice
abcnews.go.com/Health/20-surprising-ways-prevent-colds-flu/story?id=21019686#11
part of the list


Big Pharma is thriving off the flu: Business is booming as hundreds more Americans die from this year’s historic pandemic
Vaccine-makers, pharmacies and drug companies all mark-up flu shots and medications
Profit margins for vaccines are fairly slim, but panic over this year’s flu meant that the products drove overall sales up for manufacturers
Many flu medications, including Tamiflu, are very cheap to produce, and their manufacturers stand to make their money back many-fold
www.dailymail.co.uk/health/article-5383011/Big-Pharma-thriving-flu.html

See also  Why Are Large Numbers Of Birds Suddenly Dropping Dead In Multiple U.S. States?
See also  The tax rate for regular Americans is five times that of the wealthiest billionaires
835 views

1 thought on “The Flu is Killing Up to 4,000 Americans a Week! Scary Numbers”