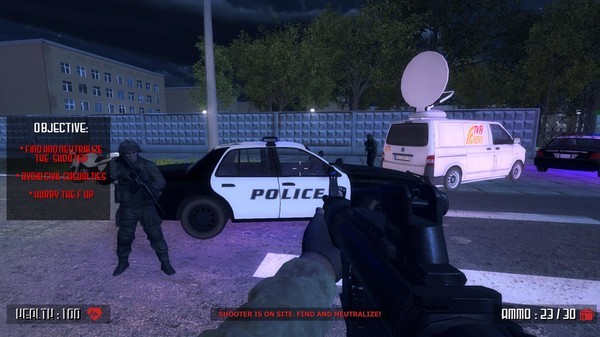 If you’re into virtual reality stuff, check this out: on June 6th, you’ll have the opportunity to release your inner demons while playing “Active Shooter”, a videogame where you can role-play a school mass shooter. I mean, school shootings are all the rage nowadays among adolescents, so why not allow kids to fantasize about killing their colleagues in virtual reality, thus training and getting better, before proceeding with the real thing? What can go wrong? Joke aside, “Active Shooter” will be available on Steam starting with June 6th, and the game allows users to become digital mass shooters in a rampage inside schools. How cool is that? The question everyone is asking before they buy: “is David Hogg in it”? And the answer is: Yeah, he’s the final boss in the game, and he hurls soy lattes at the player until their testosterone bar reaches zero.

As per a BBC report:

“According to its listing on the Steam video game store, the software lets players “slaughter as many civilians as possible” in a school environment…

…The school-shooting game is described as “realistic” and “impressive”. And the developer has suggested it will include 3D models of children to shoot at.”

Obviously, while playing Active Shooter, you’ll be provided with interesting stats about your body-count progress, including how many cops and civilians have you killed during your rampage and so on and so forth. Sounds like massive fun, isn’t it? Social justice warriors are already pressing Valve, which owns Steam, to scrap the game from their platform before going “viral”, and I am talking about Charity Infer Trust, a UK charity of sorts preoccupied with banning everything, ranging from assault butter knives to, God forbids, violent videogames. A spokesperson for the respective charity has said about Active Shooter:

“It is horrendous. Why would anybody think it’s a good idea to market something violent like that, and be completely insensitive to the deaths of so many children? We’re appalled that the game is being marketed.”

The developer of Active Shooter was accused of plagiarism in the past, or something along these lines, i.e. of selling asset-flipped games with repackaged 3rd party graphics/engines with minimal development/alterations. The developers’ web page warns users to not take their product seriously, as it’s only a simulation and not much else. Seriously, I’ve always thought videogames and violent movies are training manuals for serial killers. Here’s the official warning for Active Shooter presumably future users:

“This is only meant to be the simulation and nothing else. If you feel like hurting someone or people around you, please seek help from local psychiatrists or dial 911 (or applicable). Thank you.”

So, if you’re binge-playing Active Shooter and at some point you feel like paying a visit to your local school/high school or whatever  armed to the teeth, just call 911 or your local psychiatrist. Shooting people in real world is bad, mkay?

Hundreds of clueless leftist snowflakes took on social media to call for Active Shooter to be taken down/deplatformed from Steam, and to condemn the violence in which our society is imbibed for at least 4 decades.

These armchair Twitter activists don’t understand that Steam is simply a marketplace for developers to post their content, like Ebay is a marketplace for whatever users want to sell. They didn’t make the game. To take it down would mean to start policing what is offensive or isn’t offensive; what is too violent and what isn’t. By the way, the game is a SWAT simulator where a player can also take the role of the active shooter. No, it is NOT a mass shooter simulation, sorry BBC.

It’s almost like no one has heard of “Counter Strike”. In this day and age it would be hysterically labeled a “terrorism simulator” by the same ignorant retards that fear monger about every other little thing.

Moving along with the story, I fail to see what the problem is with these outraged snowflakes.  I mean, a Russian video game maker has identified a growing cultural trend in the USA and is exploiting that trend for profit. That’s as American as apple pie. Why aren’t Americans applauding this show of entrepreneurial spirit?

Final point: many games, such as Grand Theft Auto, already allow you to perpetrate a mass shooting in any heavily populated area of the game. Furthermore, GTA is based on real-life cities, and includes cars to engage in a high-speed pursuit and escape the crime scene safely. Why is this game taken to be philosophically better or worse than any other first-person-shooter?

My gut instinct is of course “wow, that’s sick”, but then I thought “I’ve been playing GTA since I was a kid and never ran down a hooker in real life”. As always, the issue is personal responsibility, good parenting, school-education and all that. Just boycott the company if you don’t like it, but stop being a soy-boy, alright?