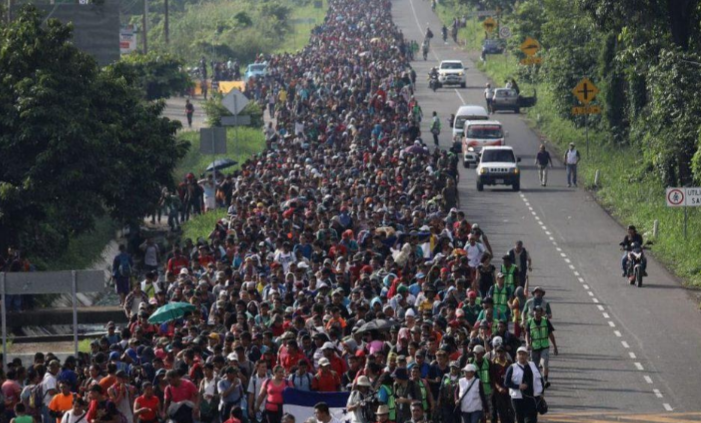 The senile POTUS is 3 months into office, and illegal immigration is reaching nightmare levels already. According to mainstream media figures, 172,000 illegal aliens were apprehended last month trying to cross the border.

Almost 20, 000 of them are unaccompanied minors, which is a catastrophe into itself.

The question is: if 172,000 were apprehended, how many did cross the border undisturbed?

In just three months, US President Joe Biden, who campaigned on what he called predecessor Donald Trump’s ‘cruel’ policies on migrant children, has seen an unprecedented number of unaccompanied minors enter the country.

Some 19,000 unaccompanied minors are being held by Customs and Border Patrol over the course of March, the largest number ever to be apprehended in a single month. The CBP fears the numbers will continue to climb, and are expecting a whopping 26,000 new arrivals daily by September, according to documents leaked to Axios.

The number of minor children crossing the border is dwarfed by the total number of attempted new arrivals, however. CBP estimated that in March alone, some 172,000 people were apprehended trying to cross over from Mexico, and that this itself was a huge increase – up 71% from last month’s total.

So you have 10-12-15 million illegal aliens entering the US in 2021. Basically, America is flooded intentionally with tens of millions of low-IQ people; people who do not speak English; people who have no papers, no ID’s, and no money.

Again, we are talking about millions of people flooding the US, ending up squatting in parks and public places. People who can’t get a job, and lack basic skills like speaking English.

There are already hundreds of thousands (if not millions) of homeless Americans, what about them?

Basically, the Biden regime is bringing tens of millions of beggars to live on welfare in the United States. Can you imagine how life is going to be in the big cities in a couple of years from now?

Because that’s where the millions of illegals will end up: in the big cities, where the resources are.

And how will they live? That’s an easy one: stealing, prostitution, selling drugs, robbing other people etc.

And the Republicans keep telling us about a “humanitarian crisis” at the border.

What about Americans? This is our country, we built it. What about our right to have a nice life?

The point of getting millions of illegals into the United States is to destabilize our social order and our economy, and vote for the Democrat Party.

Biden Administration invited these people and said they could all come in and be taken care of, but clearly there is no place to put all of them. No one knows who any of these people are. It’s a total free for all.

Who is promoting the open borders agenda? Big donors like George Soros (Open Society foundation&friends), as well as various leftist (as in Marxist) ideologists, whose only purpose in life seems to be moving as many people as possible into this country.

I am getting close to the point of wanting the military to step in, and shut this border situation down.  It sounds crazy, but we may need a military junta to re-establish the Constitution, and remove the nut jobs that dirty political machines have selected, and dumbed down voters have elected.