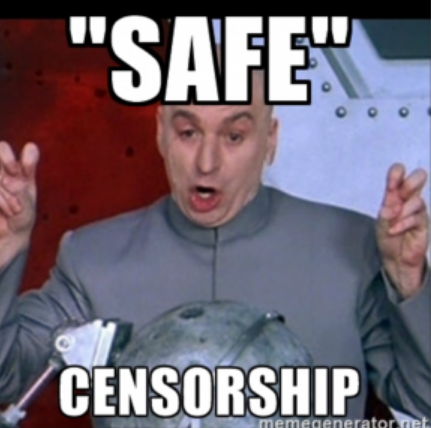 Have you ever noticed that it’s only “alternative news” (as in non-establishment) outlets that get deplatformed by social media/payment processors/Internet domain registrars et al for spreading “fake news” and/or “hate speech”, whatever those Orwellian terms mean? And today, just in time for midterms, we got word that social media giants decided to engage in a final purge of dissenting voices on their so-called platforms. Because they are not platforms which allow free speech and a free flow of ideas,as per their initial claim, but something else, since they chose to editorialize content and to censor/ban whomever they see fit.

By the way, who died and put the Zuckerbergs of the world in charge over what is and what is not news and/or truth in the modern-day public square that is social media/the interwebz? Today, two of my bookmarked websites,  the Anti-Media and the Free Thought Project, lost their Facebook/Twitter accounts in what looks like a coordinated attack (just like it was the case with Infowars and prior to them, the Daily Stormer):

Antiwar critics of establishment politics @AntiMedia and @TFTPROJECT just had their pages with millions of followers deleted by Facebook, along with hundreds of other alternative media outlets. Latest escalation of corporate censorship used as state censorship in the west. pic.twitter.com/Fdk9Yd13jI

“Today, we’re removing 559 Pages and 251 accounts that have consistently broken our rules against spam and coordinated inauthentic behavior,” the company said in a blog post. “People will only share on Facebook if they feel safe and trust the connections they make here.” (source)

After 5 years of building fans Facebook has officially unpublished our page (3.1 million fans) so we can’t post on it anymore. This is truly an outrage and we are devastated. We will do everything we can to recover our page and fight back. pic.twitter.com/H3AmHTT8Qo

READ  Local Media in Northern Michigan has gone completely silent. Not one mention on local news after heavy reporting on the crimes.

Another thought criminal is Dan Dicks:

Here’s from Press For Truth:

“The Press For Truth FaceBook Page with 350k followers has just been memory holed form the internet! 350k followers gone in the blink of an eye as we are right before our eyes witnessing the results of what happens when these big tech companies appoint themselves as the gatekeepers of political thought and opinion,”

First they came for Alex Jones and now @facebook has taken down @DanDicksPFT Press For Truth page! This is insanity, Dan has been one of the most inspirational and rational independent journalists of our era! @DewsNewz @PrisonPlanet @LeighStewy @PressForTruth pic.twitter.com/EA5WatAHUI

Facebook just shut down, Free Thought Project, Press For Truth, Anti-Media and dozens of other VERY IMPORTANT alternative media pages that we, of course, have a very close relationship with.

EVERYONE b4 we get totally erased please sign up here t.co/TjukqdhBwl

It’s pretty easy to see what’s going on: social media giants are using the midterms as an excuse of sorts to purge dissenting voices from their platforms, hence reducing Internet traffic to selected websites which made it on their target-list. Who made the list? Think along the lines of Snopes, ACLU, ADL, CNN etc. The great Internet purge begun with Daily Stormer back in 2017, then it was Milo, then Cernovich who saw their Twitter accounts deleted for various reasons. After that, they came for Alex Jones and Infowars for alleged bad-behavior.

Now, big-tech is moving at annihilating the next-level of targets, websites like ours, i.e. alternative-news websites, with moderate-high social-media driven traffic, and growing viewership. Social media is a major driver of traffic for non-corporate blogs, and if you get banned from the social-media kingdom, traffic will plummet, henceforth financial support to pay for writers and all that. And you go under. And that’s exactly what the establishment (both big tech and left political class) wants. This has nothing to do with “fake news” or “inauthentic” content. If it was for fake news and propaganda, the New York Times or CNN should have been banished from Facebook and Twitter a long time ago.

If DEMs win the Congress in the midterms, it’s going to be curtains for alternative media, mark my words. And obviously, we will never have another social-media candidate like Donald Trump in the White House. Ever. Even if it sounds far fetched, I can easily envision a future where conservatives/right wingers will not be able to weigh in on political issues on social media during federal elections via big tech implementing algorithmic filters. Think along the lines of Brazil, where they recently tested the system. And the US will most probably adopt the European model, as per Google’s own words, i.e. not based on Constitutional right and liberties, but on a collectivist scheme where certain “disadvantaged” groups will get “protected class status” by the government, while individuals will be prosecuted and singled out for wrong think on social media.

And yes, long term speaking, wrong-thinkers like yours truly will not be allowed to access the Internet altogether, if we appear on something like the government’s current (and malfunctioning) “no fly list”. That would be pretty easy to implement via Internet IDs and all that commie crap they’re pedaling since 2008.

Two, three generations have already been raised up and indoctrinated by narrowly controlled and scientifically manipulated broadcasts. The normie Internet becoming television was only a matter of time.

Thought crimes are heavily discouraged, and generally will not be tolerated. Nothing new. The actual people looking for the unadulterated truth are so rare that one might find more satisfaction searching the planet for flying pigs.