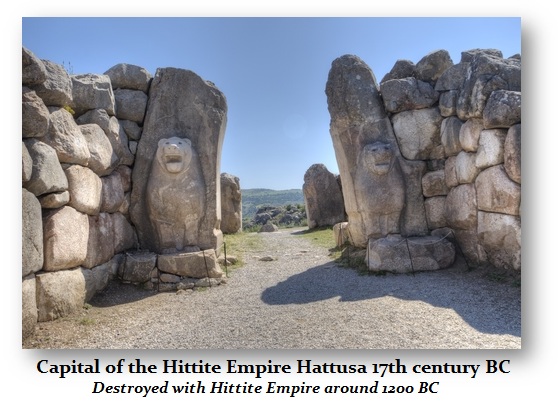 QUESTION: Mr. Armstrong; You mentioned that the environment was the primary cause of the Greek Dark age between the Heroic and Hellenistic periods. Can you elaborate on that at all?

Thank you. They do not seem to connect the dots as you say in school 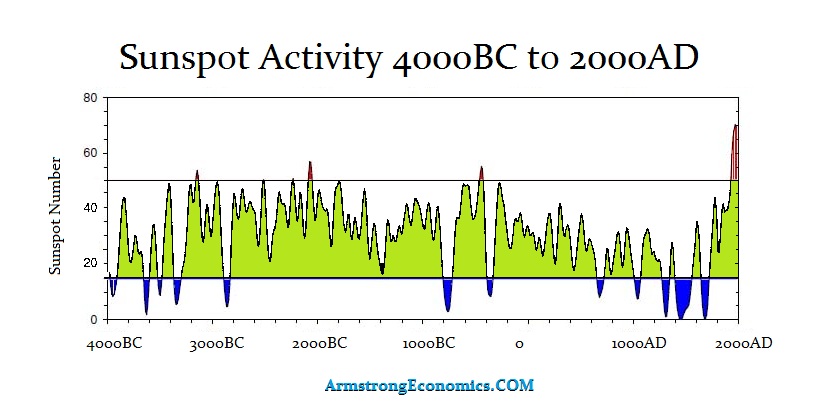 ANSWER: What is most interesting is the fact that they do not connect the dots which are so glaring for that period of time. The Bronze Age Collapse was a Dark-Age in the Near East, Asia Minor, Aegean region, North Africa, Caucasus, Balkans and the Eastern Mediterranean. This encapsulated the transition from the Late Bronze Age to the Early Iron Age, which was violent, sudden, and a major setback for civilization as a whole. We seem to focus on the fall of Rome, but not the catastrophic collapse of the Bronze Age.

The political economy of city-states that dominated the Aegean region and Anatolia region (Modern Turkey), simply disintegrated much like Rome whereby people abandoned cities and formed small isolated village during the Greek Dark Age. This takes place about 51.6 years following the cultural collapse of the Mycenaean kingdoms, of the Kassite dynasty of Babylonia, of the Hittite Empire in Anatolia and the Levant, and of the Egyptian Empire. We also see the political-economic destruction of Ugarit and the Amorite states in the Levant. Over in the Luwian states of western Asia Minor, we also see a collapse in civilization. There was also a period of tremendous political-economic chaos in Canaan (Israel). This wholesale collapse of all of these city-states resulted in the collapse of trade routes as we saw with the collapse of Rome. This also manifests in the reduction of literacy in much of the known world.

Hattusa became the capital of the Hittite Empire in the 17th century BC. The city was destroyed, together with the Hittite state itself, around 1200 BC, as part of the Bronze Age collapse. The site was subsequently abandoned. Modern estimates put the population of the city between 40,000 and 50,000 at it’s the peak. The dwelling houses which were built with timber and mud bricks have vanished from the site, leaving only the ruins of the stone built temples and palaces. The lost city was rediscovered at the beginning of the 20th century in central Turkey by a German archeological team. One of the most important discoveries at the site has been clay tablets, consisting of legal codes, procedures, and literature of the ancient Near East.

In the first phase of this fascinating period, we witness the complete violent destruction, and abandonment of cities such as Hattusa, Mycenae, and Ugarit. This all takes place within just one 51.6 year wave of the Economic Confidence Model at the end of the 13th century and the beginning of the 12th century BC. Civilization seems to collapse on a grand wholesale basis with almost every significant city in the eastern Mediterranean world is then destroyed, many of which were never again to ever be occupied again.

Assyria and Elam appear to survive the Bronze Age Collapse and then even Elam is nearly completely destroyed by Nebuchadnezzar I who revived Babylonian Empire briefly before he in turn suffered a series of defeats by the Assyrians. After the death of their leader, Ashur-bel-kala in 1056 BC, then we see Assyria began an economic decline for about 112 years. – but by the end of the 12th century BC as it really fell back to just a city-state but it did survive the Bronze Age Collapse just greatly reduced by around 1000BC.

By the end of the ensuing Dark Age that engulfed the entire region, the former Hittite Empire appears to be broken apart in separatist movements and what eventually emerges is independent city-states in Cilicia and the Levant (Syria). This period seems to be great migrations as people began to move south due to climate change. Bu the mid-10th century BC, we see Aramaeans moving into the Levant and the Philistines then settle in southern Canaan where the Canaanite-speaking Semites. From 935 BC after the worst of the collapse in sunspot activity, Assyria began to reorganize and once more expand outwards reestablishing the Neo-Assyrian Empire (911-605 BC), which the Egyptians even feared. Phrygians, Cimmerians, and Lydians arrived in Asia Minor, who were Greek in origin. The Colchians (Georgians) also emerge at this time. The various people of this region appear to reform civilization with the warming becoming the Iranian peoples such as the Persians, Medes, Parthians, and Sargatians. These groups all appear in Ancient Iran soon after the Sunspot low. In the Aegean, this is the reappearance of the Classical Greece Era. 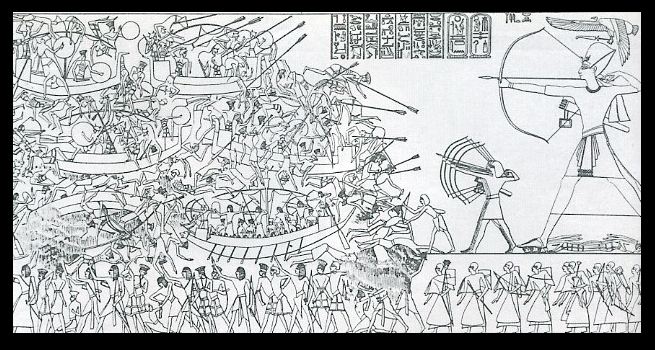 This is the period of the Great Migration South as I call it. They are known as the Sea People who invaded Northern Africa which corresponds to the colder climate up north. The Sea Peoples remain unidentified and have remained a source of much speculation. In the archaeological record, the Philistines first appear in the early 12th century BC with the Bronze Age Collapse. Their arrival is signaled by artifacts that belong to what is clearly an extraordinarily different culture from other local populations at the time. Their pottery closely parallels to the ancient Greek world. They also use Aegean rather than a Semitic script. They also eat pork as well as the occasional dog. Several passages in the Hebrew Bible describe the interlopers as coming from the “Land of Caphtor,” or modern-day Crete. Keep in mind that Crete fell to Mycenae who also conquered Troy after Thera erupted and destroyed much of the Minoan economy. I believe the Sea People were of Mycenae in origin.

There is a lack of contemporary historical explanation documenting this period. However, correlating it with the weather, it appears that we are dealing with a Climate Change where the Earth entered into a very cold period and crops failed forcing a migration south.