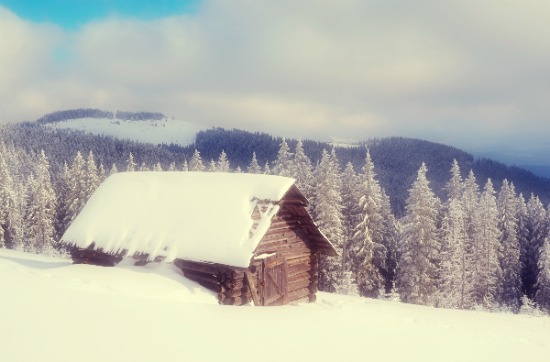 There are many potential dangers associated with winter weather, but there’s one you might not have given much thought to snow and ice on your home’s roof.

It is unclear how many deaths per year are caused by snow accumulations on roofs, but nearly every winter, there are reports of such deaths that appear in the news.

Roof collapse is a possible risk when snow accumulates on your roof, but it isn’t the only danger. In 2018, a chunk of snow about the size of a trailer fell from a roof and killed a mother and her 7-year-old son in Northern California. And, snow removal in itself carries the risk of injury and even death.

Here’s how to assess how much snow your roof can handle, how to determine if you need to remove snow, how to remove it safely, and the unique dangers that thawing ice and snow pose.

How much snow can your roof handle?

According to the Insurance Institute for Business & Home Safety (IBHS), unless your roof is damaged or decayed, it should be able to support 20 lb per square foot of snow before it becomes stressed.

These guidelines from IBHS can help you estimate how much snow is on your roof:

Fresh snow: 10–12 inches of new snow is equal to one inch of water, or about 5 lb per square foot of roof space, so you could have up to 4 feet of new snow before the roof will become stressed.

Packed snow: 3–5 inches of old snow is equal to one inch of water, or about 5 lb per square foot of roof space, so anything more than 2 feet of old snow could be too much for your roof to handle.

Total accumulated weight: 2 feet of old snow and 2 feet of new snow could weigh as much as 60 lb per square foot of roof space, which is beyond the typical snow load capacity of most roofs.

Ice: 1 inch of ice equals 1 foot of of fresh snow.

Here’s a quick method from Berlet Roofing you can use to estimate how much the snow on your roof weighs:

To check the snow load on your home, cut a 1-foot by 1-foot square the full depth of the snow from your roof into a plastic bag and weigh the bag. If there is any ice in your square foot, be sure to included it. The weight of the bag with the snow in it will tell you the weight of snow load per square foot on your roof.

Example: If the snow on my roof is 20-inches deep with .5 inches of ice, what would that equate to?

If you are in the “danger zone” based on the thickness of the various types of snow and ice (if they exceed 20–25 pounds per square foot), you should consider removing snow from your roof.

Watch for signs that your roof is over-stressed.

FEMA recommends watching for these signs:

Here’s how to safely remove snow from your roof.

Experts say you should never attempt to remove snow from your roof by yourself. Dangers associated with roof snow and ice removal include sliding off the roof, falling off a ladder, overexertion, and injury from sliding snow.

For safe removal that won’t endanger you or damage your roof, use a snow rake with a long extension arm that will allow you to remove the snow while standing on the ground. Climbing onto your roof to remove snow is generally not advised, as falls are a serious risk, and so is damage to the roof.

If you feel you cannot safely remove the snow yourself, consider hiring a snow removal professional.

Here are a few snow removal tips from FEMA:

Be sure no one is standing or walking in the areas where falling snow and/or ice may land.

Watch for icicles and be sure they won’t fall on anyone – an icicle falling from a low height can still cause injury.

An ice dam is a ridge of ice that forms at the edge of a roof and prevents melting snow (water) from draining off the roof. The water that backs up behind the dam can leak into a home and cause major damage to walls, ceilings, insulation, and other areas. Significant snow accumulations and extended periods of below-freezing temperatures increase the risk of ice dams developing.

“Melted snow runs down the roof under the snow cover and refreezes along overhangs where the roof surface temperature is lower. The water from the melting snow becomes trapped behind the dam of ice and can back up under shingles and infiltrate the underlayment, leading to leaks in the home,” the National Roofing Contractors Association (NRCA) explains.

Here’s a longer explanation of how ice dams form, from the University of Minnesota Extension:

The snow on a roof surface that is above 32 will melt. As water flows down the roof it reaches the portion of the roof that is below 32 and freezes. Voila! – an ice dam.

The dam grows as it is fed by the melting snow above it, but it will limit itself to the portions of the roof that are on the average below 32. So the water above backs up behind the ice dam and remains a liquid. This water finds cracks and openings in the exterior roof covering and flows into the attic space. From the attic it could flow into exterior walls or through the ceiling insulation and stain the ceiling finish.

There are roof and gutter de-icing kits you can buy that may help make the job a bit easier.

When the snow melts, it doesn’t necessarily mean you are out of danger.

When the end of winter approaches, the NRCA recommends checking your roof, gutters, downspouts, and drains for debris to ensure water from melting snow and ice and spring rain will properly drain from your roof:

Homeowners also should look to determine that the winter’s snow and ice has not damaged roof shingles or flashings or loosened sheet-metal openings. In addition, homeowners should check for signs of leakage around roof hatches, skylights and vents. Shingles around gutters should also be checked for damage from melting ice dams. If a roof has leakage due to ice damming, the damage should be inspected by an NRCA member contractor.

If you cannot safely evaluate your roof, experts advise hiring a roofing professional to do it for you. 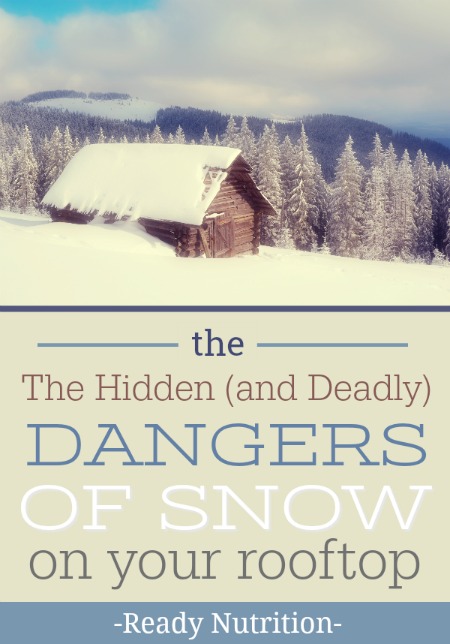 This article was originally published at Ready Nutrition™ on February 8th, 2019