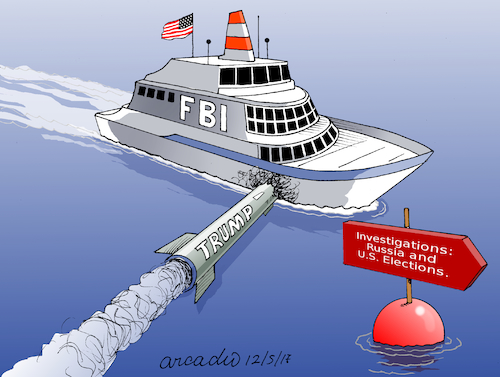 So, how did the vaunted FBI lose its way?  One only needs to track the number of politically-related cases to see a pattern of prosecutorial malpractice.  The occurrences of foul-play by FBI and DOJ principals grew steadily over the tenure of the Obama administration as one scandal after another was buried with no one being criminally charged.  There was the matter of the Uranium One deal.  Lois Lerner and IRS.  Fast and Furious.  And the unmasking by Obama administration officials of their political opponents, who got caught up in the routine surveillance of foreign targets.
The record shows that the praetorians at the FBI and the DOJ made sure they didn’t enforce the law in these cases because it would embarrass the Obama administration, whom they worked for.  This disturbing progression of subverted justice ineluctably led to the exoneration of Hillary Clinton, which enabled her to make her run for the roses without the sword of Damocles hanging over her head.  In a sense, chief FBI and DOJ officials had become a quasi-political star chamber with the power to pick and choose whom to investigate, whom to indict, and whom to exonerate.
But exonerating Clinton wasn’t enough for them.  Instead of letting their cover-ups scroll off the public’s radar screen over time, they refused to lay low.  They figured offense is the best defense.  If it’s alright to waive charges against their political favorites, then it must be alright to pursue charges against their political enemies.  Hence, they thought it would be a wonderful idea to interfere in a presidential election and, when the results weren’t to their liking, they tried to undercut a sitting president with a biased investigation that has yet to show any evidence that President Trump colluded with the Russian government.
By orchestrating the appointment of a special prosecutor to investigate accusations against President Trump’s campaign team for supposedly colluding with the Russians during the election, law enforcement officials appear to have gone too far.  They sought to destroy Clinton’s opponent, Donald Trump, but, in the process, they themselves became the focus of attention and not in a good way.
Like a fox that preys on a rabbit
I had to get you and so I knew
I had to learn your ways and habits
Oh, you were the catch that I was after
But I looked up and I was in your arms and I knew that I was captured
For his probe, Special Prosecutor Robert Mueller selected a host of investigators and attorneys, who happened to be strong Clinton supporters.  As the probe continued, blatant conflicts of interest surfaced among its chief investigators.  There appeared a disturbing nexus between the personnel who investigated the Clinton case and the Trump-Russia probe. As mentioned earlier, Peter Strzok and Lisa Page showed virulent political animus against Trump, as the sweethearts traded thousands of damning text messages.  Former Associate Deputy Attorney General, Bruce Ohr, had compromised himself and the Bureau by meeting with Fusion GPS, the firm hired to prepare the phony Trump-Russia dossier.  Further, Ohr’s wife worked for Fusion GPS.  You can’t make this up.
Not only did FBI officials stiff-arm FOIA requests from citizen advocacy groups, they also refused to respond to record requests from congressional committees, which have constitutional oversight power over the DOJ and the FBI.  Ironically, the probe into Trump-Russia collusion has turned the klieg lights on the upper echelon of the FBI and the DOJ.  The bureaucrats tried to thwart each and every attempt to find out about their suspected use of the phony Trump-Russia dossier to acquire a FISA court warrant to spy on the Trump campaign.  And they continue to do so.
The hunters got caught in their own trap.
Suddenly things rearrange, and this whole world seems like a new place.
They thought they were exempt from FOIA requests, congressional oversight, and leaks to the media. They forgot that they are nothing more than civil servants who are supposed to work for taxpayers, not water boys for political parties and powerful politicians.  They let that sense of invincibility go to their heads.  As a result, they destroyed decades of public trust in the Federal Bureau of Investigation and the U.S. Department of Justice.
They sullied the bedrock American principle of equal justice under the law.  They cynically discarded this ideal as a meaningless platitude intended for the consumption of politically naïve masses.  In real life, spineless government officials did what they thought they had to do to get ahead.  Or so they thought.
This time, their schemes to dispense unequal justice finally caught up to them.  They played political Russian roulette by targeting a sitting president with manufactured evidence paid for by his opponent, Hillary Clinton, after letting her skate away from criminal charges.  But karma is a bitch.  Their half-baked Machiavellian plan is being exposed with one stunning revelation of bias after another.  And the main players in this American tragedy at the FBI and the DOJ are feeling the heat and jumping ship or being reassigned to the gulags within their organization.  James Comey got fired, Andrew McCabe announced his retirement, James Rybicki resigned, Bruce Ohr has been demoted and reassigned, Peter Strzok has been exiled to the Human Resources Department at the FBI, Lisa Page still works as a lawyer for the FBI, and so forth.
They can run but they can’t hide.  The Lady with the scales, whom they abused, is in hot pursuit.  And, if justice finally catches up to them, as it eventually will, they will stand trial before a jury of their peers, just like the multitude of Americans they applied the law to and indicted when they held the reins of power.  What goes around comes around.
Oh, my plan didn’t work out like I thought
‘Cause I had laid my trap for you but it seems like I got caught
What’s this whole world comin’ to
Things just ain’t the same
Anytime the hunter gets captured by the game.