The looming end of Quantitative Easing?

Since the ‘Panic of March 2020’, the financial markets have enjoyed a period of relative serenity. Recently, however, this calm has been broken by the extensive use of the ‘reverse repo’ facility by the New York Fed.

What is going on in the financial markets? Is this a sign of bigger problems ahead?

In this blog-entry we delve deeper into the arcane and hidden world of the repo markets and explain why the QE programs of the Fed may be reaching the end of their rope both from a broader economic perspective, as well as that of the financial markets.

But first, let’s take a moment to review what the “repo-markets” are.

The repurchase agreement, or “repo”, is a financial agreement in which the borrower agrees to buy back the security it sold to the lender at a later date for a higher price. A repurchase agreement is essentially a short-term loan backed by high quality collateral, most often 10-year Treasury bonds.

If the counterparty is unable to meet its obligations to the lender, the lender can liquidate the assets serving as collateral in the secondary markets. This makes the repo market a reliable source of short-term funding for institutional investors and market makers, which have short term liquidity requirements as the natural consequence of their daily trading activities.

Repos have a variety of maturities, the most common contracts being overnight repos. The vast majority of trades completed on the repo market are considered overnight repos. Longer-term repos are generally in the range of two days up to three months. Open term repos are also available for market participants.

Repo can also be used to borrow fixed income assets in order to execute trading strategies, such as arbitrage through the use of reverse repo contracts. Terms are often the same as in normal repo contracts, ranging from one day to three months. It is estimated that the daily volume of the U.S. repo market is around one trillion dollars.

Repo markets play a significant role in the smooth functioning of the financial markets, as they are used to finance large scale purchases in sovereign bonds, equities, and other similar assets. The Federal Reserve utilizes the repo market to conduct its monetary policy through open market operations.

The interest rate used in the repo contract can either be at a fixed rate or tied to a specific reference rate. The Federal Reserve publishes three different reference rates based on trading on the repo markets, which are updated daily on the Fed’s website. The most commonly-used repo reference rate is the SOFR-rate, which is derived from the Secured Overnight Financing Rate.

The New York Fed is authorized by the FOMC to conduct both repo and reverse repo operations in order to carry out the monetary policy directives of the Federal Reserve. The repo operations conducted by the New York Fed are intended to stabilize the financing conditions on the repo market. They are used to maintain the desired reference rates on the repo market, which are the basis for the vast majority of repo trading.

Reverse repo operations are primarily intended to temporarily reduce the quantity of reserve balances held by the banks. They are also intended to control short term interest rates, particularly the IOER-rate, or the Interest on Excess Reserves.

The spike in reverse repo usage

Recently, the New York Fed has been conducting unusually large reverse repo operations on the repo market (see Figure 1). Or, to put it precisely, other repo-counterparties, like banks and money market funds, have been seeking reverse repo contracts from the Fed en masse in order to earn minimal interest (currently around 0.06%). 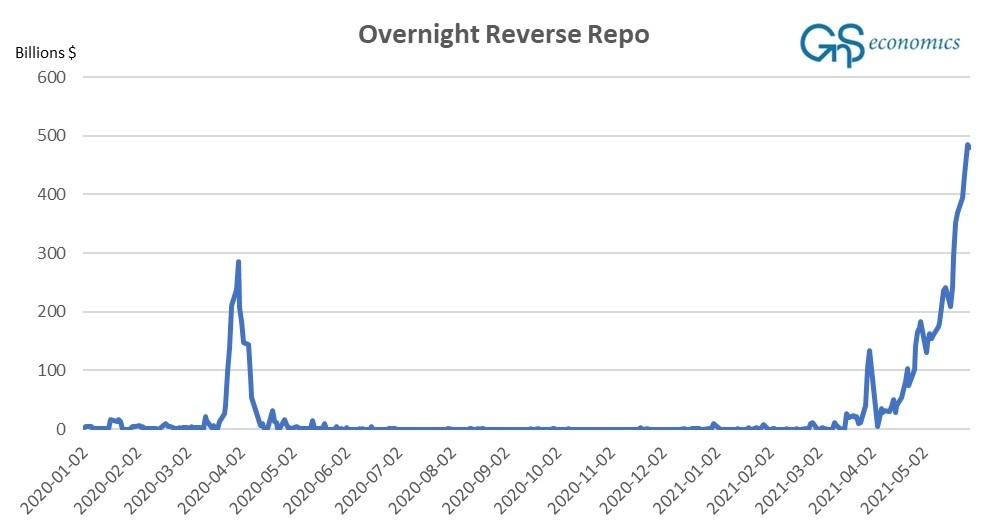 Why are they doing this?

In principle, there are two explanations. Either the repo-counterparties lack collateral or they are ‘sterilizing’ the QE-program of the Fed, where the Fed buys Treasuries through its network of Primary Dealers.

The former would signal an increased demand and/or a short-supply of a good-quality collateral in the financial markets. As noted above, the main collateral used in the repo-markets are the US 10- and 5-year Treasuries, whose yields have been rising in recent months due to increased inflation expectations. At the same time, the Fed has been buying them (see Figure 2). Thus, there may be a shortage of 10- and 5-year Treasury notes in the markets.