The massive anti-work movement sparked by the popular subreddit imploded after Jesse Watters from Fox News interviewed a moderator named Doreen. Doreen destroyed the movement without any interrogation from Watters, as they simply did not prepare for the interview. Recorded from a stereotypical basement, Doreen stated during the interview that “laziness is a virtue.” The 30-year-old dog walker spends around 20-25 hours a week working, but would like fewer work hours.

The subreddit is in a panic. People are unsubscribing, moderators are leaving, and Doreen’s dark past of sexual assault has surfaced. One user posted a guide to understanding basic public relations and how to talk during an interview. Worker’s reform is one topic. For example, Amazon employees should not be forced to use water bottles for bathroom breaks and people should not need three jobs to survive. Everyone deserves to be treated with respect. However, the illusion that society could function if no one worked has been dismantled. 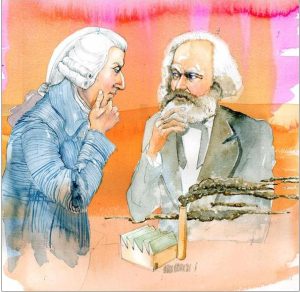 Karl Marx viewed labor as exploitive and a constant class struggle that was as black and white as rich v poor. Marx never credited innovators who, in turn, create jobs with their ideas. Adam Smith, on the other hand, saw that eliminating innovation by redistributing confiscated wealth would ruin the economy. Smith’s concept of the invisible hand sees everyone as acting in their own self-interest, which proves beneficial for the free market economy at large.