VIX futures and options are frequently being applied by investors as a hedge against volatility. If stocks tumble, some of the losses incurred can be offset against the profits generated from trading these options. When investors purchase call options, it means that they are expecting a rise in the price of a given asset or an increase in the level of an index.
Demand for one-month call options tied to the CBOE Volatility Index, a popular gauge of stock-market volatility, has spiked in the past week, a sign that some are bracing for a sharp downturn following the inauguration of President-elect Donald Trump. Trump will take the oath of office on Jan. 20.
Investors have purchased 250,000 VIX call options with a strike price at 21, and another 100,000 with the strike at 22, according to Brian Bier, head of sales and trading at Macro Risk Advisors, an options brokerage. The options cost roughly 49 cents per contract. It would take a massive selloff to make these options profitable, Bier said. “Even in the current low volatility environment, we’ve seen a lot of people still looking at the VIX as a hedge,” Bier said.
Technically speaking, the U.S. benchmarks have established a December holding pattern, digesting the late-year rally to uncharted territory. At the same time, the Volatility Index has briefly registered a 52-week low this week, raising a near-term caution flag, against an otherwise firmly-bullish longer-term backdrop.
Since the beginning of the year, stock-market volatility has been relatively restrained despite increasing uncertainty surrounding the future direction of fiscal and monetary policy in the U.S. The Daily Shot, a popular market newsletter, illustrates this divergence in the chart below. 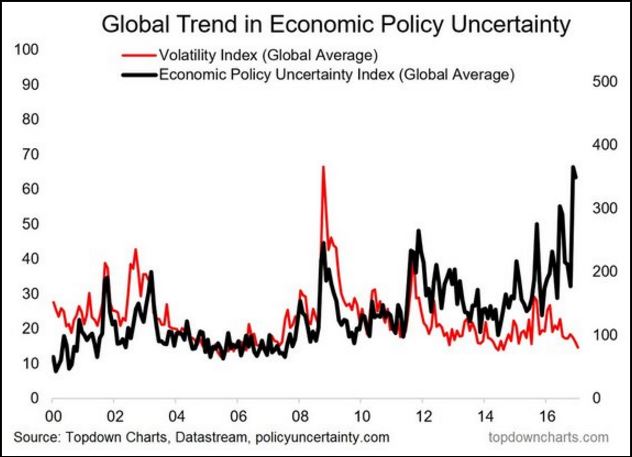 Another reason for the increase in demand for one-month VIX options could be that they’re cheap relative to three-month, six-month and nine-month options, Bier said. Moreover, aside from the beginning of Trump’s first 100 days in office, a period where investors expect Trump to begin implementing his plans for infrastructure spending, trade and deregulation, there are no clear market-moving catalysts, Bier said.
Since touching a five-month high on Nov. 4, volatility has trended lower as U.S. stocks embarked on a torrid rally that took the Dow to within a hair’s breadth of the 20,000 milestone last week. But stocks have struggled to build on their gains this week, and some Wall Street analysts are saying that the inauguration could mark a near-term top.