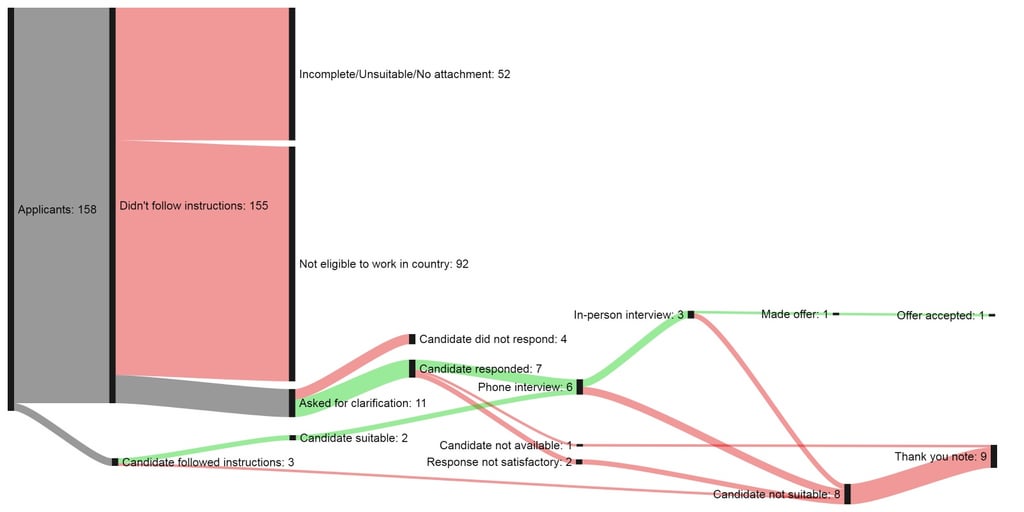 There have been quite a few Sankey diagrams here from job seekers. I thought it could be interesting to post an employer’s viewpoint. For reference, we’re a small tech company, and we rely almost exclusively on LinkedIn to hire people.

When posting a job ad, I like to place some specific instructions in the text to encourage people to send me an email with a specific subject line. This at least shows they’re paying attention. That’s not so difficult, right? Turns out, fewer than 2% of applicants managed to complete this simple task!

There were 654 views of the ad (not shown here), and 158 applications. Of those, almost 60% were applicants not eligible to work in the country. Almost one third more were rejected because they were unsuitable, didn’t bother attaching a resume / cover letter, or were apparently just clicking around randomly.

Of the applicants that didn’t follow the instructions, I nevertheless contacted eleven of them as their background was interesting and relevant. Four didn’t bother responding, even though they had applied for the position!

See the diagram for a few other details.

If you’re really looking for a job, for me the key here is to at least put a little bit of effort into the process! The many clicks into the void not only waste your time, but also my time and money! I really appreciated the three applicants that bothered to follow the simple instructions. One wasn’t suitable, but I certainly took the time to thank them for their application, and that little human connection was appreciated.

Edit to clarify: There seems to be some confusion about a few things.

1) The request I had was to send an email with a particular subject and to include a brief statement as to why the position is appealing to the candidate. I agree that looking for work is a pain, but if you’re qualified and take the 15 minutes to do this, you’re already way ahead of everyone else.

2) The “asked for clarification” is from me. I did look over the applications that simply arrived via LinkedIn and asked eleven people for more information.

3) The person that got hired is indeed one of those that I asked for clarification. In fact, after the phone interview, he was not even the first choice, but we still decided to bring him in for an interview. That’s where he was most comfortable expressing himself and it became clear he was the one for us.

4) The quantity of people “not eligible to work in country” is astonishing, as this requirement is stated at the very top of the job description. As a small company we are looking for someone local and there’s no way we are going to start visa sponsorships, etc.

5) I’m definitely not into jerking people around. But I also can’t afford to make a mistake in hiring the wrong person. Some of the people that we have working here have been with us for over 10 years, most over five. We work well together!