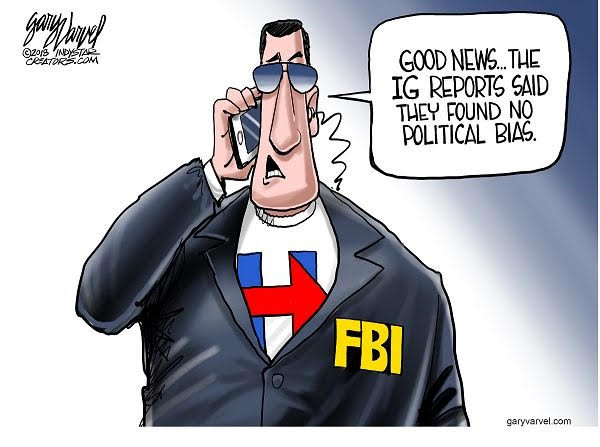 The U.S. Department of Justice (DOJ) Office of the Inspector General (OIG) has delayed issuing a report on its interminable probe into FBI surveillance abuse.  See https://www.foxnews.com/politics/reluctant-witnesses-in-fisa-abuse-probe-agree-to-talk-to-doj-inspector-general.

Unfortunately, we cannot trust the Inspector General’s office led by Michael Horowitz to deliver a fair and unbiased report at the end of its lengthy investigation.  Like the Mueller Report, it has cost millions of taxpayers’ dollars for career DOJ staffers and investigators to uncover what the rest of the world already knows; i.e., that the FBI and DOJ misled and defrauded the United States Foreign Intelligence Surveillance Court to obtain warrants to spy on a Trump associate named Carter Page.  And, by doing so, the FBI was able to surveil President Trump and his team of advisors before and after his election in 2016.  It is well-documented that certain FBI and DOJ officials harbored a strong animus against Trump and actively sought to derail his bid for the presidency in favor of his opponent Hillary Clinton.  And it doesn’t take an internal review by a conflicted government agency to investigate the issue endlessly.  Justice delayed is justice denied and the OIG has once again delayed one of its high-profile investigations, which has frustrated observers who expect, perhaps foolishly, that the anticipated OIG report will be dispositive of a major scandal within the top ranks of the FBI and the U.S. Justice Department.

Instead of finally delivering its long-overdue report, the OIG now says it needs more time to interrogate witnesses who have recently come forth with new information bearing on the case.  Instead of spending millions more on DOJ lawyers, who have shown a propensity to protect bureaucrats (like themselves) from the arm of the law, Horowitz should simply hand over whatever he has found to U.S. Attorney John Durham, who, unlike Horowitz, has subpoena power to compel witnesses in and out of the government to testify, who can convene a grand jury, and who can issue criminal indictments, if warranted.

The OIG lost all credibility when it couldn’t find wrongdoing by the FBI in the Clinton case after probing the matter for well over a year.  See https://www.investmentwatchblog.com/comey-and-horowitz-birds-of-a-feather/.  Amazingly, the OIG report contended that no hard evidence could be found that FBI officials did not act in good faith to conduct an honest investigation in the Clinton matter.  Apparently, it wasn’t compelling enough to the OIG that certain investigators had privately expressed in explicit terms their desire to have Clinton win the election and that their strong bias exactly matched the outcome they sought when they exonerated Clinton of any wrongdoing.  Or, put another way, the fix was in from the jump.  The OIG, after spending a boatload of money, either couldn’t see through the charade or, more likely, the OIG saw through the charade but deliberately chose to ignore or downplay it by delivering a whitewash.

If past is prologue, the OIG may once again be searching for a way to protect or, at least, mitigate any harmful blowback on the institutions of the FBI and the Justice Department instead of placing the rule of law above all other considerations.  Therefore, if the OIG report is substantially complete, as has been reported, the OIG should immediately release what it has and file an addendum later on, if necessary.  You don’t wait until you have every last bit of information before filing the results of an investigation or it will never get done.  In fact, if left to its own devices, a government entity will study an issue to death because its resources are effectively unlimited.

Perhaps, the OIG is temporizing because it knows U.S. Attorney John Durham is conducting a parallel investigation, whose results could very well be at odds with the OIG’s report, as it now stands.  Maybe Horowitz believes it is better to wait than to be embarrassed by Durham’s findings, which could be much more critical of FBI and DOJ leaders.  If that is what is happening, it shows how politicized the OIG is, as it demonstrated in its probe of the FBI’s handling of the Clinton case.  Needless to say, the evidence should speak for itself and nothing else.  If there is some other agenda driving its investigation, the Office of Inspector General should close shop.

A recent example of bureaucracy run amok is Special Counsel Robert Mueller’s report concerning alleged Trump-Russia collusion.  The report took almost two years to produce and cost taxpayers over thirty million dollars.  Mueller’s team of investigators was composed of partisan lawyers, most of whom had contributed to Democratic Party candidates in the past.  Unsurprisingly, the Mueller report managed to cast aspersions on President Trump and his integrity, even though it could not conclude that the president conspired with the Russians or obstructed justice. It is notable that the Mueller report studiously avoided any mention of the FBI and DOJ’s dubious, and likely illegal, abuse of the FISA court to obtain warrants four times to spy on Trump associates.  The Mueller report also failed to investigate what appears to have been real Russian collusion involving Hillary Clinton and the Democratic National Committee and their payments to obtain a fake salacious dossier besmirching Donald Trump.  This illustrates how operatives employed by the U.S. Justice Department can use their immense power with impunity to protect themselves while attacking perceived political opponents.

In true bureaucratic fashion, the Praetorians at the Justice Department have shown that they will do whatever it takes to insulate themselves from the laws they enforce on others.  This is especially pernicious since they themselves happen to be the law enforcers.  The Roman poet, Juvenal, presciently asked two millennia ago, “Who watches the watchmen?”  That riddle remains mostly unanswered, but woke U.S. citizens are losing their patience with this nonsense.  While hypocritically applying the law aggressively to others (namely Main Street Americans without any political or financial clout), law enforcement officials manage to stay comfortably above the law, which makes this case, coupled with the Clinton email case, the biggest political scandal in U.S. history.  And it doesn’t matter whether a wide swath of the mainstream media turns a blind eye to it for political reasons based on their overarching hatred of President Trump.  The current state of journalism reflects badly on the fourth estate, but it doesn’t diminish the magnitude of this deep-state scandal that has far-reaching implications for all Americans of all political persuasions, if left unresolved and unpunished.

Americans are beyond cynical at the blatant double-standard.  They are pissed off.  They have become revenants in search of equal justice, which is one of the core principles upon which our nation was founded.  It shouldn’t take years of cat-and-mouse maneuvering by unelected law enforcement officials before they are held accountable for obstructing justice, interfering with a national election, perjury, and other crimes.  Not only have these politicized public servants eluded justice, some of them have profited from their crimes through book deals and go-fund-me online accounts.  It’s a poke in the public’s eye with a sharp stick because it validates the skeptical view that cops cannot be trusted to police themselves.  To date, not one of the corrupt law enforcement officials has been indicted, which is astounding given the vast amount of incriminating evidence that has been exposed for public consumption.

It would be nice to tell them their time is up, but never underestimate the ability of the justice system to offend our sensibilities.