The computer was correct. There was no Blue Wave. The real interesting aspect is it appears we may have a Bearish Reversal elected in the Senate for the Democrats. While the Democrats won the House, they did not elect any Bullish Reversal and in fact, they may have continued the downtrend with winning control, but with a lower high once again.

The one thing that is ABSOLUTELY guaranteed is there will be ZERO cooperation and everything will become even more obstructive now so we can expect the economy to decline going into the 2020 turning point on the ECM. The Democrats have vowed to seek impeachment and they will now have subpoena power to obstruct Trump and this will bring a swift end to Draining the Swamp.  While impeachment is not likely, they will do the same as they just did in the Kavanaugh hearings and throw whatever allegations they can hope someone will believe them as they did before. They have vowed to force the release of Trump’s tax returns. All of this will be designed to make the 2020 Presidential elections far worse than any in the past. 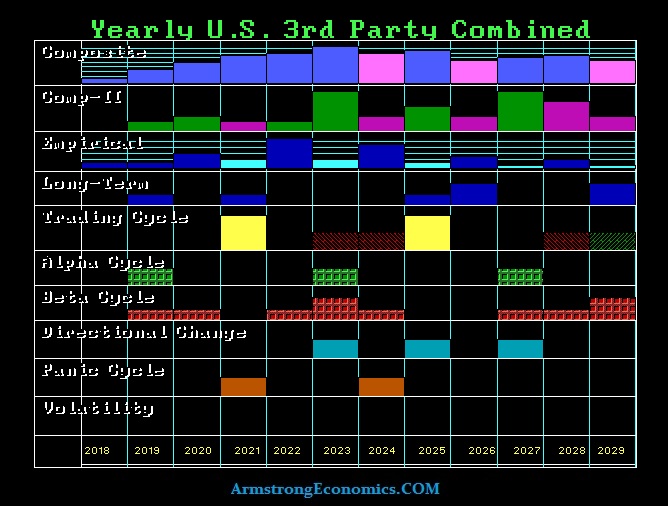 So expect nothing but obstruction. Running the government is no longer a priority. This is just going to be a grudge match from here on out and that is what the model has been projecting. Nothing but Panic Cycycle and Directional Changes in politics and our models on 3rd party activity will constantly rise into 2024 and more and more people begin to see that the political situation has become hopeless.

Many races are too close to call. So we will wait for the final numbers and update later when we have them.