Everyone now knows that the only meaningful goal of Fed policy is propping up the world’s greatest credit-asset bubble.

In this era of fake news and deep-fake digital recordings and images, it’s important to use unedited images. With this firmly in mind, here is an unedited photo of Federal Reserve Chair Jay Powell and former Fed Chairs Janet Yellen and Ben Bernanke from their recent unprecedented appearance on 60 Minutes: 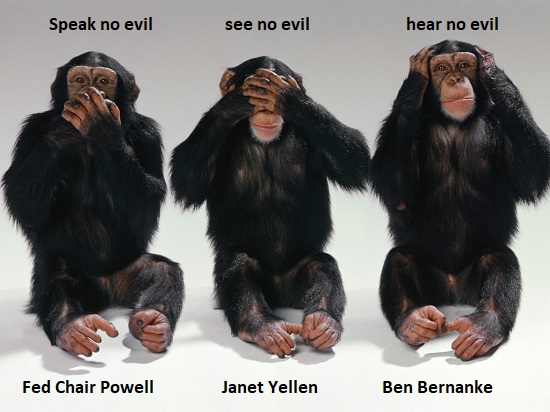 The bottom 80% got essentially nothing except a drastic reduction in the purchasing power of their stagnating wages. If this is how the Fed “cares” about average Americans, I wonder what they’d do if they chose to impoverish average Americans. Oh wait a minute, they already did.

I’ve covered this in recent essays:

What Killed the Middle Class?

What triggered the unprecedented propaganda-fest of the three Fed monkeys? The realization that the Fed is evil is seeping into public awareness, and the Fed honchos are awakening to the reality I’ve spoken to here many times: the Fed is now constrained politically in terms of how far it can go to bail out the banks and the super-wealthy again.

Speak no evil (Jay Powell), see no evil (Janet Yellen) and hear no evil (“I saved the fortunes of the super-rich, oops I mean the world” Ben Bernanke) were trotted out to deny the Fed is evil, which only confirms that the Fed is in fact evil. Why else line up the Fed Chairs like school kids giving their book reports?

The Fed is now trapped by three dynamics:

1. It has been neutered by the stock market–nobody believes the Fed is “independent” or that it “cares” about anything but the market and the financial aristocracy who own it.

2. It can’t force people to borrow and spend or lenders to lend to poor credit risks.

3. It is finally being recognized as the key driver of widening wealth and income inequality.

Some may claim the December stock market swoon “tutored” the Fed, but it was actually neutered: Fed credibility is a bad joke as everyone now knows the Fed is the stock market’s slave. And since the top 10% own the vast majority of stocks, the Fed is the slave of the financial aristocracy. Everything else is fancy footwork, obfuscation and propaganda.

Everyone now knows that the only meaningful goal of Fed policy is propping up the world’s greatest credit-asset bubble because the Fed has elevated the stock market to the benchmark for the entire economy. Nothing else matters, and oh, by the way, the trillions created out of thin air by the bubble belong to the already wealthy.

While the Nation Fragments Socially, the Financial Aristocracy Rules Unimpeded

As noted in The Coming Crisis the Fed Can’t Fix: Credit Exhaustion, the Fed can’t force households or corporations to further burden themselves with additional debt, nor can it force lenders to give “free money” to borrowers who are guaranteed to default. Rather than possessing godlike powers, the Fed is toothless. The only power it has is to inflate asset bubbles that benefit the few at the expense of the many.

This chart shows the precise effect of Fed policies since 2008: a vast, unprecedented expansion in the wealth and income of the financial aristocracy at the expense of everyone below.

Any questions about why the Fed is politically trapped? How much more of this will the American public be able to stomach before a populist from the left or right or heck, even the center, publicly call out the Fed’s backstopping of the stock market as the driver of soaring wealth-income inequality and demands the Fed be stripped of its power to protect and reward the banks, financiers and the super-wealthy?