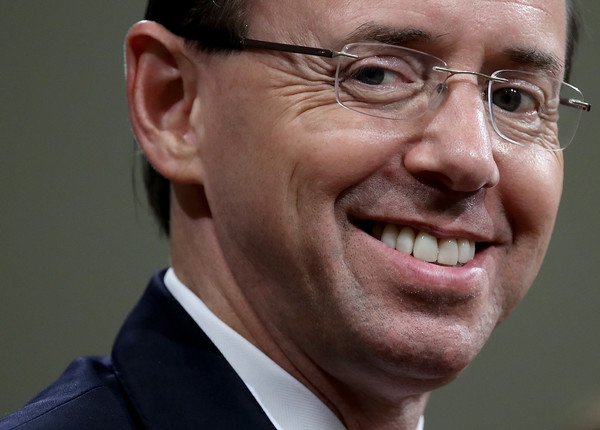 The failing NYT, to use President Trump’s own parlance, published an interesting article on Friday. The article claims (based on inside/anonymous sources of the best kind, obviously) that deputy AG Rosenstein, which is the actual attorney general of the United States, as Jeff Sessions recused himself from, well, everything, plotted/conspired to remove the POTUS from office in the spring of 2017. The bright plan concocted by Rosenstein was something along the lines of Trump cabinet members wearing recording devices during meetings with the POTUS. The respective recordings would have been made public at some point, and would have showed, beyond reasonable doubt, that President Trump is a crazy sociopath, and the White House is a ship of fools. Enter the 25th amendment, Trump gets kicked out of office, everybody’s happy, Pence becomes the new president and gets impeached over Christian fundamentalism or hating gays or whatever.

Finally, Hillary enters the White-House riding a white camel, leading a huge crowd of Antifa operatives dancing with pussy-hat wearing feminists and the whole #metoo gang, and gets coronated queen live on CNN, or something to that effect. First female POTUS, you know the drill, love trumps hate and all that liberal palaver. I am exaggerating a little bit for dramatic effect, but basically this is what Rosenstein tried to achieve at some point back in 2017.

What can I tell you? This is ingenious, to say the least. Like a Swiss watch. The plan’s beauty is its simplicity. I mean, Trump’s own cabinet members wearing recording devices, to secretly record the President, then Rosenstein, Mueller and the whole gang building a credible case that The Donald is not fit for office…it’s pure genius man.

READ  IT’S WORSE THAN WE THOUGHT! Fauci and Top US Doctors Caught! They CONSPIRED to Disqualify Hydroxychloroquine as COVID Treatment — MILLIONS

The NYT piece details how Rosenstein started his master-plan about removing the POTUS from office via the 25th  right after the Donald fired FBI director James Comey. Rosenstein vehemently denied the claims from the NYT:

“The New York Times’s story is inaccurate and factually incorrect. I will not further comment on a story based on anonymous sources who are obviously biased against the department and are advancing their own personal agenda. But let me be clear about this: Based on my personal dealings with the president, there is no basis to invoke the 25th Amendment.”

Read the full report by The New York Times here. Now, the NYT piece is quite shocking if you’re a normie, and it claims to quote anonymous officials from the Department of Justice. The mutiny attempt organized by Rosenstein in the spring of 2017 was aborted at some point for unclear reasons (maybe because it was too crazy even for die-hard never Trumpers).

If I understand it correctly, this weasel Rosenstein recommended Trump to fire Comey, and then wanted to wear a wire to convict Trump for taking his advice? Does that qualify as entrapment? Or sedition?

Now, here’s why all the talk about Rosenstein is taking place: (Trump’s latest FISA Tweet on Friday)

“I met with the DOJ concerning the declassification of various UNREDACTED documents. They agreed to release them but stated that so doing may have a perceived negative impact on the Russia probe. Also, key Allies’ called to ask not to release. Therefore, the Inspector General has been asked to review these documents on an expedited basis. I believe he will move quickly on this (and hopefully other things which he is looking at). In the end I can always declassify if it proves necessary. Speed is very important to me – and everyone!”

– with or without the bureaucracy

– and Rosenstein will have to quit, because back in 2017 he signed a FISA warrant to spy on President Trump

The DEMs taking back control of the house is their ONLY hope of surviving this. Now, if you ask me, this dude Rosenstein was outright, deliberately, intentionally, plotting, conspiring, to overthrow his elected boss. There used to be a tree on the White House lawn to deal with this sort of situation.

People like him and his ilk can never be trusted. Remember that Rosenstein and all his FISA folks cabal are toast, but they’ll be canned (and more) after the Donald will declassify the documents. Trump and his team are expert anglers, not fish. Remember where you read it first.

The thing is, they have nothing in the Mueller investigation – no collusion, no obstruction, just some guy who didn’t pay his taxes. So…where do the Dimms/Deep State go from here? They need Trump to fire Rosenstein to set up an obstruction case. Why else would the NYT turn on a life-long deep state mole like Rosenstein?

Most things in life are what they appear to to be.  Everyday there is a new headline exclaiming something we already know. The left are nothing more than a group of treasonous weasels that will do anything to keep the herd moving toward socialism.