by Gordon T Long
US COMMERCIAL REAL ESTATE
The Global Real Estate market dwarfs all financial markets by any comparison. 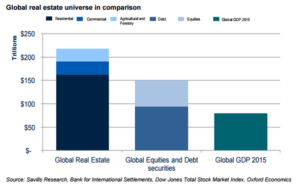 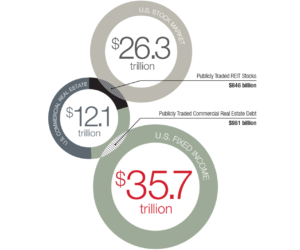 The Global Real Estate market being so large, it has always been stable and as such it is the favorite of institutions for long term investing – specifically Insurance companies, pensions, trusts endowments, small banks & credit unions etc. However, if it were to be destabilized only slightly it would have profound consequences globally, as well as in the US. The US Commercial Real Estate market presently approximates $13T or about one fifth the annual Global GDP.
A number of paradigms shifts currently underway and beginning to emerge could be just such catalysts.
The Us Commercial Real Estate market is so large it needs to be considered by sectors – Industrial, Office, Rental / Apartment and Retail. Through financing, regulations & codes, securitization products etc they are inexplicably linked. A shock wave in one will have consequences across the entire industry that can alter credit terms, financing availability, collateral requirements, rollover funding etc. In our new world of globalization, factors such as changes in foreign capital flows have a profound impact on any of the above variables.
Few may appreciate that the US is a dominate destination for such foreign capital.

Banking problems abroad, such as the EU which would require repatriation of capital, could impact prices and rollover financing quickly since commercial real estate is typically financed on 5 and 10 years terms so that supporting collateral values are maintained. This is a requirement because owners can and do simply “walk” away when they fail and collateral is the only protection for investors. The collateral being solely the value of the remaining real estate asset.
In the US,though banks are both financiers and owners, it is important to realize that the 8-12,000 small banks & credit unions along with Insurance companies, Pension Funds, Endowments, Trusts, Foundations etc are actually the ones “on the hook” for the bulk of US Commercial Real Estate. 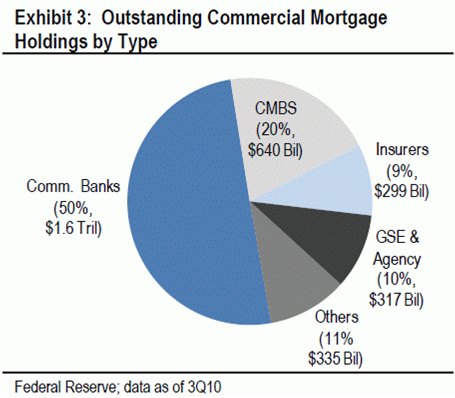 WHAT COULD GO WRONG?
Because of the securitization complexity of the industry financed through MBSs, Leveraged Loans, Collateralized Loan Obligations, Synthetic CLOs etc., the risk exposures are immense. The US housing industry imploded via comparably simple securitization product structures such as CDS’s, CDO and ABSs. Few professionals would claim they have a grasp or understanding of all the creative and secretive means used to finance these modern multi-billion dollar commercial real estate projects. These projects are based on underlying assumptions of growth, rates, prices, sustained trends etc..
Let’s focus as an example on just one of several Paradigm Shift occurring presently, and in just one of the retail commercial real estate spaces, that is US Retailing.
This Paradigm is about the massive technological advancement of the overlapping of the internet, online shopping and robotic kiosks. This change alone is monumental but not yet fully accounted for by those sitting on the trillions of dollars of investment assets who cannot react as fast as the technology adoption is occurring.

See also  DeSantis Blasts Fauci, DC for Lying To The Public About Treatments

Over-storing can be traced back to the 1990s when the likes of Walmart, Kohls (KSS), Gap (GPS) and Target (TGT?) were expanding rapidly and opening new divisions, according to Ken Perkins, the head of Retail Metrics, a research firm that advises institutional investors on the sector.
“In my opinion, the housing bubble of the mid 2000s allowed consumers to take out tons of cash from their homes and spend robustly even though incomes were stagnant. This masked the over-stored nature of the retail landscape“.
AMERICAN REALITY IN PICTURES
I recently produced a video for MATASII subscribers documenting a trip to a well established local mall in my area. The video is called “A Rapidly Rupturing Retail Reality!” It brings home the stark reality of the above statistics.
If you haven’t been to a mall in a while it will shock you. The retail landscape is changing rapidly and dramatically.

The recent closure of all 140 Sports Authority stores in the US is part of a trend showing no sign of letting up any time soon. Consumers continue to shop online like never before, as traffic dwindles in brick and mortar stores.
Long-term store closing plans have already been announced by a slew of major brick and mortar retailers, including The Gap (NYSE:GPS), Barnes & Noble (NYSE:BKS), Office Depot (NASDAQ:ODP), Walgreens (NASDAQ:WBA), American Eagle Outfitters (NYSE:AEO), and Aeropostale (OTCPK:ARO). Furthermore, Wal-Mart’s (NYSE:WMT) plans include closing 154 US stores, while they currently operate 4,627 US stores as of June 30, 2016. Kohl’s (NYSE:KSS) has closed 18 locations with Macy’s (NYSE:M) shuttering another 40. The chart below shows an idea of the sheer amount of closures occurring in recent years, as well as the upcoming. 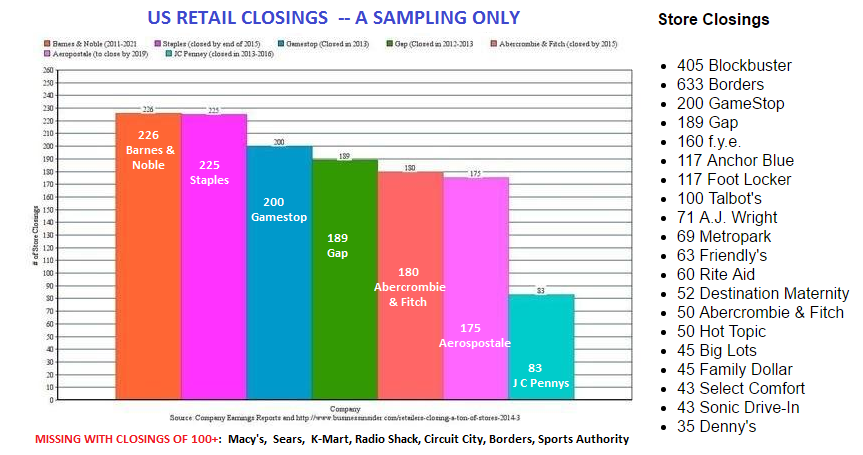 TSUNAMI OF PROBLEMS ON THE HORIZON
Despite all the current market euphoria based on the Trump administration’s promises of “dramatically” reduced taxes, fiscal spending and massive regulatory reduction – the stark reality is still:

THREE WAVES
Those who live close to the ocean know that waves often come in sets. Many things come in sets of three with the third wave being the biggest and worst.
This is likely what lies ahead as the US Retail Commercial Real Estate (CRE) wave soon washes ashore!

Most fundamentally, the reason for this occurring is:

1 thought on “The Next Financial Implosion Is Not Going To Be About The Banks!”