We now have had three months of a 3-mo/10-yr yield curve inversion. The track record this has had in predicting recessions: 100%.

"A deeper inversion is sending a stronger statement that a meaningful slowdown is coming," said Brian Rehling, co-head of global fixed-income strategy at Wells Fargo Investment. "A recession is a possibility in the next 12 to 18 months, but it's not a done deal." pic.twitter.com/GOv9rAoZPs

US 30-year bond yield falls to record low under 2%

From real estate and retail stores to classic cars and art, the weakest segment of the American economy right now is the very top.

Since financial engineering via buybacks/tax cuts has produced earnings growth on a per share basis it should also be pointed out that corporate profits actually peaked in 2014 and have trended down since.
You are paying a lot more for lesser profits in aggregate. pic.twitter.com/LCgYrXhyIo

Holy Mackerel. "Chief investment officer of Calpers said earlier this year that the expected return over the next 10 years would be 6.1%, down from a previous target of 7%." I'm guessing that's gonna be off by roughly 6.1%. t.co/72kTzta5hK via @markets

According to Moody’s, these GIBs — which includes the likes of Goldman Sachs, J.P. Morgan, HSBC and Deutsche Bank — will see their profitability come under greater pressure over the next 12 to 18 months. They will also witness low client activity due to global uncertainties, Moody’s said.

“The stable outlook for the global investment banks reflects our expectations that profitability for the GIBs may have peaked for this economic cycle,” Ana Arsov, managing director at Moody’s, said in the research.

Many central banks around the world have performed U-turns with their monetary policy, cutting interest rates in order to boost lending in their economies. Lower interest rates, however, restrict a bank’s ability to make profits. Rising rates, meanwhile, are good for banks as they allow them to lend money to investors with a profitable rate of interest.

“There’s a negative feedback loop that’s starting to develop. You can absolutely see hints of it,” Calvasina said in an interview. Companies “are being cautious.” 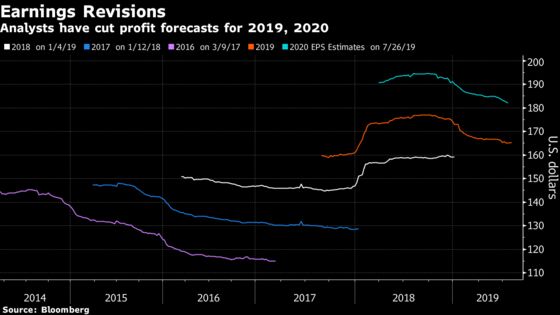 Germany has negative rates..PMI is at 43..and they are on the brink of a technical recession …