Most of us would like to think that we’re individuals, that we are above the influence of group pressure and that we view the world objectively. In reality, we are often under the influence of powerful people that we do not know for reasons that we do not understand. As long as civilization has stratified us into this hierarchal system, the people at the top have used information warfare to keep us under their control. Sometimes they are unable to control us, but often they are successful.

Lately, we’ve seen the media throw around terms like “fake news” and government do investigations into whether or not Russia influenced our election. This seems like a desperate attempt by the elites to maintain control of their narrative that has been damaged by the internet. The internet has decentralized the flow of information for the very first time in media history. In other words, news has always been fake to a large extent, and controlled by the elites.

To give you an idea of how deceptive the media has always been, look at this speech from John Swinton, who was editor of the New York Times during the Civil War: 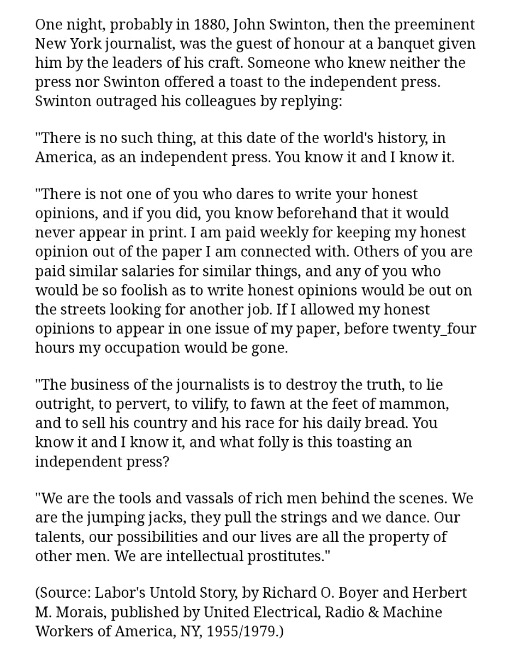 Although the internet has helped millions of people wake from the distorted reality that elites sell through mainstream channels and publications, millions more are still under the influence.

The media’s reaction to the Parkland shooting involved high emotions and very little logic. They immediately paraded the survivors in front of cameras to promote the anti-gun agenda. Cable news, New York Times, Washington Post, The Guardian, Huffington Post and just about every other mainstream outlet jumped at the opportunity to demonize guns. They acted as if gun violence was the number one threat in the world and AR-15s were behind all gun violence.

What about the real number one threat in the world: total war between the most powerful countries in the world? A war with Syria would easily make that a reality. Russia, Iran and eventually China would confront the belligerence of the US if it decided to topple the Syrian government. Yet, we didn’t hear that concern in the mainstream media. We heard from voices who were mainly supportive of Trump’s decision to strike Syria even though they shriek hysterically when Trump does anything else.

We can see the mainstream narrative’s influence with our own eyes. Look at the image below of people protesting a potential WWIII (left) and people protesting gun rights (right). Both photos were taken in Washinton D.C.

The difference is staggering. Guns kill a little over 30,000 people per year, and about 2/3 of those deaths are from suicide. Wars kill millions and create refugee crises. Although, an armed citizenry is a threat to the elites, while war makes the elites extremely wealthy.

Even though the internet is changing the way people get information, we still have a long way to go. The public’s support for the anti-war movement compared to the public’s support for the anti-gun movement shows that a large portion of the population is still under the influence of mainstream narratives. I’m optimistic that one day the corrupt elites will completely lose control of the narrative and we will finally have an independent press.