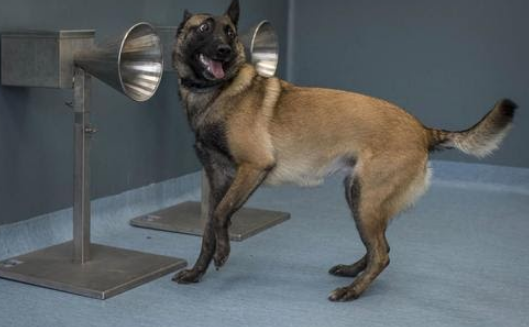 According to a Bloomberg article, various European countries are now training dogs to sniff out covid in people. As in, instead of relying on the famously unreliable PCR tests, the powers that be will use dogs in airports or wherever to detect the killer virus.

Here’s from the article:

The trial, which was conducted at France’s National Veterinary School in Maisons Alfort near Paris, collected sweat samples from the armpits of the participants with cotton pads that were locked into jars and gave them to at least two different dogs for sniffing. None of the dogs had prior contact with the volunteers. There were 335 people tested, of which 109 were positive in a PCR test that served as a control. Nine dogs participated, and the researchers didn’t know which samples were positive.

In July, German researchers showed trained dogs were able to distinguish between saliva sampled from people infected with the virus and those who were not more than 90% of the time. Finland, Dubai and Switzerland have started training dogs to sniff out infections.

To begin with, the “control” group is based on PCR tests, which are crap. So, it doesn’t mean anything.  Actually, it does mean something.

Allow me to elaborate:

Dogs can tell the difference between blood types. You may be simply finding those with A- blood out of the samples. The dog will now find anyone with A- and mark them as infected with Covid.

If the dog is sniffing antibodies, that is worthless. There is no Covid specific antibody. Anyone that tells you there is, is lying to you.

There are single antibodies that work across a range of pathogens. There isn’t unlimited ways to get into a cell. The presence of agM antibodies doesn’t specifically mean Covid. It just means you had an infection.

READ  Will Global COVID Relief Efforts Renew the US and European Influence Worldwide?

This is also very troubling because the antibodies stay in your system after you recover. So you might not be sick at all, but still be labeled so.

Which happens a lot with PCR testing.

That’s because the PCR test cannot distinguish between supposed Covid and a number of different infections, including flu, hepatitis, and herpes. This is called nonspecific interference and it is mentioned in the test documentation.

So you might just be training dogs to sniff out flu, and be calling it Covid. Just like the PCR test.

The PCR test is not a diagnostic tool, and this is a known fact (even the guy who invented the test says so).

Since labs were told by the WHO to amp-up the cycle threshold to at least 38 to 40, false positives were the only result possible.

I made a recent trip to the ER where they wanted to give me a PCR test. I asked “What’s the cycle threshold?”  Not a doctor or nurse present even knew what i was talking about.

I had to school them on why I needed to know and what that was. They had no idea. Without that basic information, I advised, I couldn’t give informed consent so go pound sand.

Also, the antigen test isn’t accurate at all. Do you know how it works? It finds that you have or have had an infection. Like, any infection. But because the claim is that Covid is supposedly the most active current infection in the world, that is what you have.

Getting back to our story, the dog is simply responding to training.

If the training is flawed, then the entire method is flawed.

This isn’t like having a dog sniff cocaine, where you know 100% what the dog is being trained to sniff is cocaine.

There is a saying, simulations are doomed to succeed. It is that real world failures can only be found in the real world. You can’t accept that your lab tests will never fail if they never failed in the lab.

Covid has set a very dangerous precedent of absolute garbage science being accepted as fact.

Think about it: how can a dog detect something which has no genetic sequence, the very biological procedure which gives any virus an identity, and which has never been isolated in a pure form?

I really believe there is no covid 19 virus.

It’s just another cold (corona) virus arbitrarily labeled as such in order to pull off the greatest mind control programming feat in all of human history.

I am talking about the fakedemic/plandemic to get you to put up with fake mail in ballots and take a fake non-vaccine RNA modifying injection.

The lies surrounding this mind control operation are of epic proportions.