The Reckoning Is Upon Us

Decades of fiscal profligacy are culminating in an explosion of government debt that is poised to bring simmering monetary debasement to a boiling point. Central bank interventions have aided and abetted reckless government spending that has obfuscated poor underlying organic growth fundamentals. Instead of laying the groundwork for future real economic growth, monetary authorities have fostered a euphoric investment environment with delusional asset valuations. Paradoxically, we are past the point of no return where the stimulative policies that have created this frenzy are the death knell for the economy. The world is suffering from a debt overdose. It now must face the inevitability of collapsing financial asset prices and synchronized fiat currency devaluation.

In the US, we have recently seen a precipitous increase in government deficits to World War II levels, which are now accompanied by a significant decline in the trade balance. The recent shrinkage in net exports strongly suggests that a deep new slump in the current account is underway. Based on Crescat’s estimates, the US twin deficit is on track to reach over 25% of nominal GDP which should soon be the worst level ever reported. 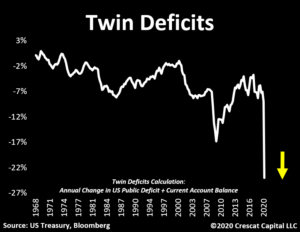 Fortunately, the severity of these long-standing macro imbalances helps set the stage for an incredibly optimistic outlook for precious metals, especially relative to equity markets. In the chart below, we can see a clear relationship between twin deficits (inverted) and the gold-to-S&P 500 ratio. During times of fiscal disorder, monetary metal tends to outperform overall stocks which suggests that a significant move in this ratio is still ahead of us. Let us not forget that this time around policy makers are also fighting “deflation” tooth and nail. The necessary expansion of the monetary base to suppress interest rates and thereby create a negative and declining real interest environment should serve as a major tailwind for the gold-to-S&P 500 ratio to continue to rise. 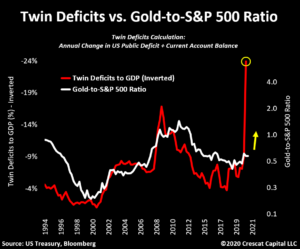 A Forthcoming of a Key Macro Event

By the end of 2021, $8.5 trillion of US Treasuries will be maturing and, at the current macro conditions, the US government will have no option but to roll over its debt obligations. Consequentially, this will likely cause a shift in the role of monetary policy. Allow us to elaborate. Foreign investors now own the lowest percentage of outstanding US government securities in 20 years. Historically, they funded over 50% of all marketable Treasury securities. Today, that number has dropped to 35%. The Federal Reserve, meanwhile, has increasingly become the buyer of last resort. It now owns a record 22% of all marketable Treasuries. This convergence of ownership is particularly dangerous and appears irreversible. Given the current record government debt to GDP, high unemployment, and large budget deficit, we expect the Fed to monetize the government’s debt burdens at the highest rate ever, from now through 2021. To reiterate our views from prior letters, over-indebtedness and the need for further monetary expansion is a global phenomenon that we believe will lead to the value destruction of all fiat currencies relative to gold, not just the US dollar. 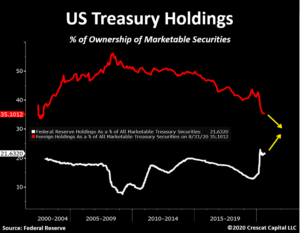 Policy makers are indeed hamstrung. The dependency on extreme monetary policies to maintain the stability of financial markets has become a key part of every central bank mandate. What is puzzling however, is the fact that asset prices have never been so detached from underlying fundamentals. US households are now worth over 6x today’s GDP, a number far higher than any other Fed-induced asset bubble, including both the dotcom mania in 2000 and the housing bubble that preceded the 2008 global financial crisis. Today’s excesses are anything but business cycle low behavior. It is quite the opposite. We are still at a major asset bubble peak. Meanwhile, the economy is already in a recession, one that is pre-destined to linger based on our macro analysis. As we have seen throughout history, the unwinding process from absurd asset valuations leads to real damage in the overall economy. Asset bubbles always burst. There is a business cycle and it is intertwined with security prices. Today, the two have diverged in the short term in a perverse and unsustainable way based on massive raw speculation. There will be a reckoning. 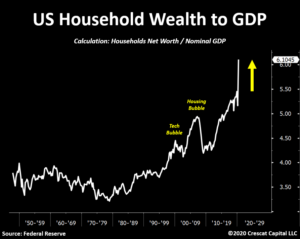 There Is Only One Way Out: Monetary Debasement

The overarching message from central banks remains consistent; none of them can sustainably afford having a strong currency. The set-up of artificially low rates combined with ballooning fiscal deficits, extreme monetary dilution, and inflated risky assets creates, in our view, a veritable utopia for gold and silver. We are in a debt trap globally. Monetary debasement is unavoidable. In such scenario, precious metals miners remain one of the very few industries with substantial fundamental improvement in the stock market today. Balance sheets are notably cleaner across most mining names. Capital spending also remains historically constrained and, in combination with strong cash flow growth, median free cash flow for the top 20 miners more than doubled in the last 12 months. It is astonishing that an entire industry which truly benefits from today’s macro backdrop is worth less than 3.5x the market cap of Apple! The level of asymmetry remains insanely attractive, especially after the recent pull back in precious metals prices over the last week. We believe gold and silver stocks are poised to move significantly higher in the months and years ahead. 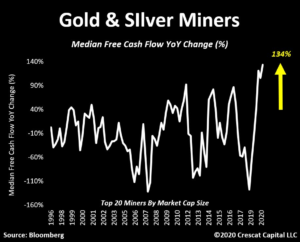 A Stellar Month for our New Precious Metals Fund

We are pleased to report that the Crescat Precious Metals Fund was up 86.2% net in its debut month. This was the biggest single month’s performance for any Crescat strategy ever. It was accomplished in an overall flat market for the precious metals industry in August. In our view, the strong relative performance is important early validation for the potential of our activist strategy. While the fund cannot not have such incredibly strong performance every month, and there will be pullbacks along the way, we strongly believe there is substantial return potential over the next several years in this fund. Our macro analysis shows that we are in the early stages of a new secular bull market for precious metals.

We are also excited to share that our Global Macro and Long/Short hedge funds made the top of Bloomberg News’ hedge fund monthly performance table for the third straight month and the fourth month this year with net performance of +8.5% and +11.2% respectively in August. These two funds are up 51.6% and 49.1% net year-to-date. It is important to note that Crescat’s two hedge funds were also at the top of Bloomberg’s table in March, the month when the market crashed. We capitalized overall on that environment via our short positions, even though our long gold positions underperformed at that time. We remain significantly short today in both hedge funds and are determined to capitalize on the re-ignition of a new tactical bear market that we foresee based on our macro models.

Performance Across All Crescat Strategies 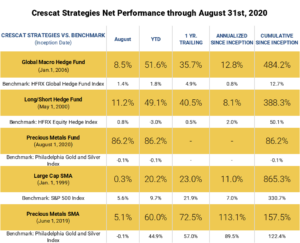 After we published our Blood in the Streets letter on March 17 saying it was time to buy gold stocks, precious metals miners have been far and away the best performing industry in the stock market. From April through July, the Crescat Precious Metals SMA Composite delivered a 142.2% net return versus 96.1% for our benchmark Philadelphia Gold and Silver Index.

Since the benchmark’s recent highs on August 5, it has retraced about 15.8% of its gains through yesterday’s close with most of the correction happening in just three of the last four trading sessions.

A pullback from such strong levels is not only natural but healthy at what we believe is only the early stages of a new precious metals cycle after a ten-year bear market.

The stock market at large has been selling off and remains extremely over-valued, unlike gold stocks. It is more likely the beginning of a much bigger downturn for stocks. Meanwhile, in our analysis, gold mining stocks are still highly undervalued today and setting up to diverge to the upside like historical analogs in 1930-32, 1973-74, and 2000-02.

In the past several days, it seems the combination of gold bulls, stock market bulls, and dollar bears are getting nervous that the Fed balance sheet expansion has stalled since its peak in early June. In our analysis, Fed liquidity injections have been the number-one driver for gold since the Fed’s quantitative tightening experiment in 2018 and the repo crisis which pivoted it back to quantitative easing in late 2019 as shown in the chart below. 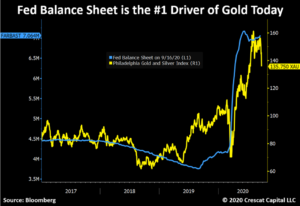 We believe there are at least six structural forces that will pressure the Fed to further expand its balance sheet at new record levels and propel undervalued gold and silver prices much higher in the near term:

Today, the precious metals industry represents a deep value, high growth industry that has only just begun to shine after a long bear market.

With the help of world-renowned exploration geologist, Quinton Hennigh, PhD, Crescat is investing in a portfolio of the most promising new, large, and high-grade gold and silver deposits in viable jurisdictions across the planet in our hedge funds and precious metals strategies. We believe we can unlock tremendous value through de-risked, high probability future discovery and growth in this portfolio.

Strong outperformance over complete business cycles remains Crescat’s goal. We are particularly excited about our potential to perform over the next few years because of our macro research supporting where we sit in both the precious metals cycle and the overall stock market and business cycle. We believe there is a strong opportunity to extract performance on both fronts over this time frame given our firmwide position at this critical juncture in the global economy and stock market today.

On the activist precious metals front, we have many incredible new funding opportunities in front of us right now for October, the type of activist deals like those we had teed up in July that led to our great August.

In our strong view, this is a much-needed correction in gold stocks to shake out the weak hands. We strongly believe it is an excellent buying opportunity in what is still the very early stages of a new secular bull market for precious metals. We encourage those who want to take advantage of this buying opportunity to contact us before the end of this month.